I was asked to make a Father's Day card for a friend, but I don't have a lot of typical 'men' images, and I don't think he's an entirely typical man anyway. So, I decided to go with this. 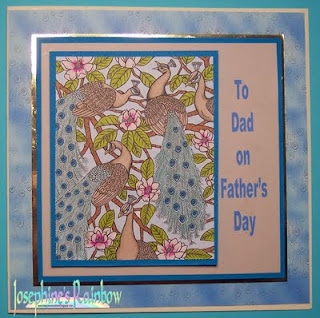 The image is one from Dover Books - it came as part of their weekly sampler quite a while ago. It's coloured with Promarkers. The sentiment and  background paper were generated in Photoshop Elements, the backround using a piece of the peacock tail and adding some shading. I've kept the rest of the card fairly simple - just some matting - as I don't want it to be over-fussy.

I'd like to enter this card into the following challenges:
Crafting for All Seasons where the theme is Father's Day,
The Paper Variety where they want something 'for the guys',

Passion for Promarkers where they want blue/brown or pink/brown.
Stamping Boutique where the theme is 'Men Only',
There's Magic in the Air where they want something masculine.
Posted by Josephine at 22:55

Hi Josephine your friend is going to love your card, its not only suitable for a man but its beautiful to. hugs Shirleyxxxxx

Lovely card! Thank you for joining in at CFS!

So Pretty!!!thank you for playing with us at Paper Cupcakes/TMITA

Hi Josephine, what a gorgeous card I love the sweet image and your colouring is perfect. Thanks for joining us at PFP this week. Hugs, Denise x

Such a beautiful card and gorgeous colours.
Thanks for joining us at PFP.
Hugs Emma x