This time, at Crafty Cardmakers, we want you to go green! Other than that, you can make anything you want.

Unusually, I chose to make something that isn't a card! 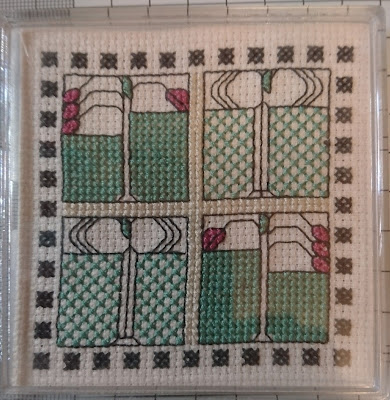 The pattern is one I've had for a very long time, from a set by Barbara Thompson Designs. There is a series of Rennie Mackintosh style designs, but as this one is mainly green, it fits the bill for this challenge!

I used to do a lot of cross stitching, and I'm trying to get back into it. The blocks of a single colour here make for a fairly simple start, especially as my eyesight isn't as good as it used to be. That's not so much a problem for doing the stitching, but more for following the pattern.

Our theme this fortnight is Recycle. Other than that, no restrictions, although it'd be better if it's obvious what you've recycled!

I do a lot of recycling, but normally just take a container and use it, not bothering to decorate or anything. I've got an IPad box that was being thrown out at work that holds my blending sponges, for example. Very useful, but not really attractive. So, for this challenge, I had to put in some effort. 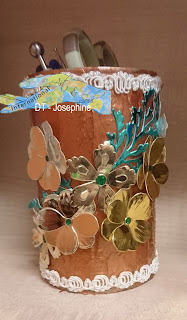 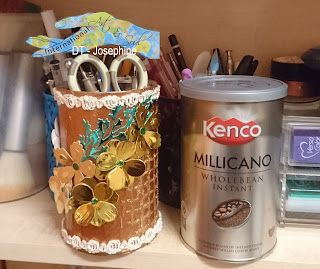 So, I took a coffee tin like that one, and wondered how on earth I could cover it. I don't do a lot of that sort of thing, so I had to try something a little different. In the end, I decided to try using embossing paste. I've had some jars of that for, probably 15 years, and have never really had much success with it. In fact, when I checked out the jar of metallic gold paste, it was rather too thick for this purpose. The copper was ok, and so I used it to cover the tin. When that was dry, I applied a Sheena Douglas masking stencil to the tin. I applied more paste through the stencil, and added glitter to this layer. The stencil wasn't big enough to cover the whole circumference, so there was still a smooth panel. This, I decorated with some die cut flowers, cut using dies from Crafter's Companion and Sue Wilson and completed the effect with some braiding. And that's about it! I'm not sure I'd do another one of these, because I'm not completely happy with the result, but it's definitely better than the original coffee tin, so I'll use it! 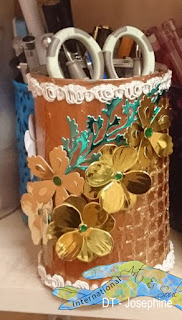 I hope you'll play along this fortnight!
Posted by Josephine at 12:00 2 comments:

This time, at Crafty Cardmakers our challenge is to make something with lots of texture! Other than that, it's up to you.

I chose to make a card using the leftovers from another recent make. 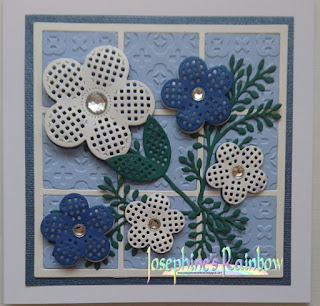 The patchwork background is made using a Sizzix die, and I've embossed or debossed each of the squares using s Cuttlebug folder. The flowers were made using Tattered Lace Ditsy flowers dies, and I love all the texture in those layers. The background leafy bits are made using a Sue Wilson die set.

I hope you can join us.

That's right, it's a brand new challenge blog, and this is our first challenge. Our theme is Love is in the Air, so very appropriate for this time of year!

And for this, I made a card for my husband for our anniversary which is next month. 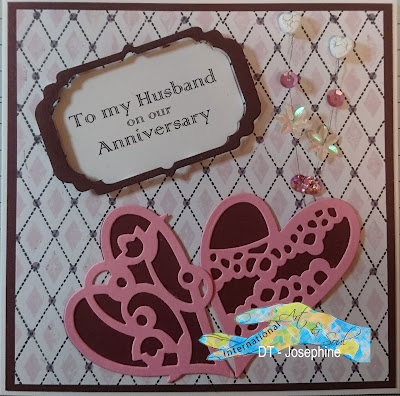 A little bit of a cheat. I made the background for this card ages ago using stamps from Inky Doodles and Distress Ink. I do like the way their background stamps can be combined like this to give a (fairly) regular background pattern.

The hearts and sentiment are all cut using Sizzix dies, and the sentiment is computer generated. To complete the card, I've added some embellishments from my stash.

I do hope you can join us for our first challenge!
Posted by Josephine at 12:00 3 comments: