Our theme for this fortnight is Bunnies, Chicks and Eggs. So, make anything you like so long as it has some or all of those represented somewhere.

I make Easter cards for immediate family every year, but I tend to stick to flowers because I don't like the whole 'cute' theme for either Easter or spring. So, I had to give some thought to this, and remembered my Everyday in Moonbeam Meadow CDRom from Crafter's Companion. 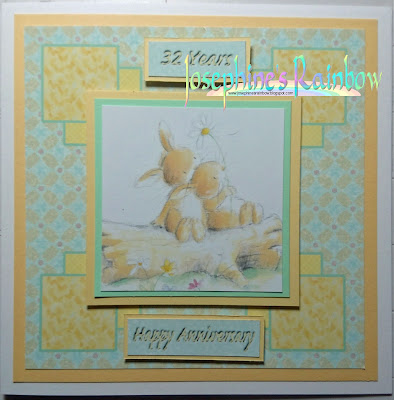 So, a card for my husband for our anniversary.

I assembled the background in Photoshop Elements using three different background papers from the CD, and then designed the sentiments using a fourth paper. After printing, I added a little layering and that's it!

One of the things I find hardest to do is to cut out sentiments like that. Yes, I could design them to fit a die, but sometimes that doesn't work with the design. I'm still in search of a trimmer that will cut such things square but most aren't designed for small bits. I bought some layering rulers a while ago and used them here. They do work, but I really don't like the raised edge I always get when I use a craft knife. It gives some funny effects - like the really obvious shadows in the photo, and despite my best efforts, I still struggle to get a really square result. Any recommendations will be welcome, so long as they don't require me to 'do it by eye' because my eye just isn't up to that!

Still, after 32 years, I'm pretty sure my husband knows how much I struggle with these things!

I hope you can join us this time.
Posted by Josephine at 12:00 6 comments:

The challenge for this fortnight it so use humour. I'm normally wary of using humour in cards as I'm very aware that one person's humour can be another's embarrassment, so this was a hard challenge for me. Then, as I sat in my usual chair, I saw this: 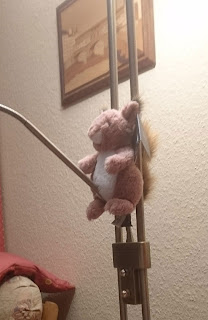 That little squirrel lives on the standard lamp in our living room. It was given to me by someone I'd worked with throughout the 17 years I was at the special school I left at the summer. And there's a story behind it.

About 15 or so years ago, I was walking to school. It was summer and I was wearing some open sandals and as I went down a footpath I used regularly, I spotted a squirrel further down. I expected it to climb up the fence and be gone into the nearest tree, but instead, this squirrel ran at me. I stopped dead, rather surprised and a little anxious. Fortunately, it got to within a foot of my poor, unprotected feet and decided to run away again. When I got to work, I told a couple of colleagues who both found the incident hilarious. And ever--after, the story of the squirrel and its 'nut-crunching teeth' became a bit of a standard. (I don't think it was my phrase, but it was attributed to me whenever the story was re-told.) Anyway, the woman who gave me the squirrel when I left has a birthday coming up, and I'd already bought a die set in her honour. 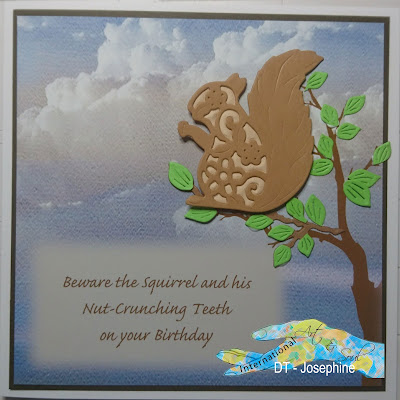 And this was the result. The background paper is from a set by Panda Bear that I got while I was on the Stitchy Bear design team. I've added a tree silhouette and the wording using Photoshop Elements. I think the die is from Tonic, and the set included a couple of branches and leaves which I've added, along with some extra leaves on their own. For the inside, I've used the same background, but expanded it to fit across the inside of the card. 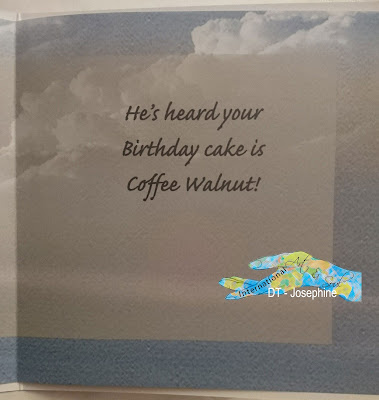 And that's it! The humour is very specific to just a few people, but at least I know it was at my expense rather than someone eles's!
Posted by Josephine at 12:00 3 comments:

Our Challenge this fortnight is to Go Green. You can make anything you like so long as the predominant colour is green. 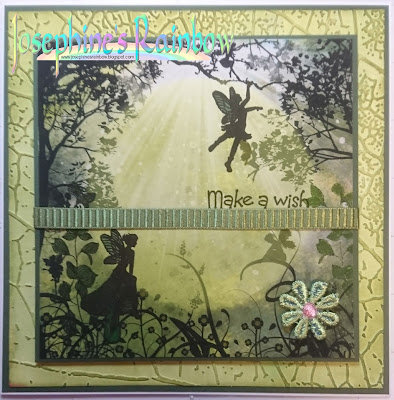 The background is one of the digital backgrounds from Crafts and Me, and I enhanced the centre  using a circular layer of pale green over the image and darkened the outer areas before printing. Then, I stamped some fairies and a toadstool (Clarity), and a sentiment and added some glitter pen (Crafter's Companion). The background was created with Crafter's Companion Glitter Pens as a watercolour wash and then embossed with one of their embossing folders. I inked the embossed areas and edge with Distress Ink. The ribbon and lace flower are from one of my ribbon boxes. (I really need to use ribbon more often!) All the ink used was in various shades of green even though it looks fairly black.

I hope you can join us!

Our challenge this fortnight is two-fold. Use a Die and Emboss You can either emboss using a folder, or use heat embossing - the choice is yours!

I decided to use a stamp I haven't used for a while. 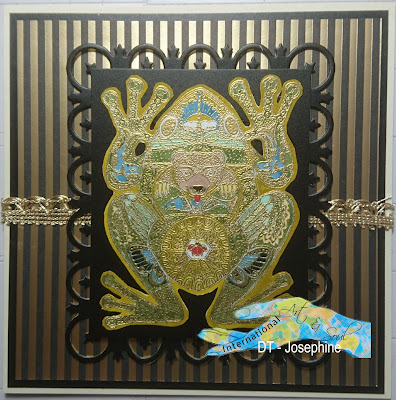 The stamp is from the Animal Spirit range. I stamped it in Versamark ink and embossed with gold detail powder. It turned out remarkably well, although embossing means there's very little left to colour! I used Crafters Companion Glitter pens for that, and completed with a border around the image in gold, before cutting the image and mounting it on black card. I've then framed the black using a Spellbinders die cut. The background paper and lacy ribbon are from my collection. I rather like the drama of the final result.