One Stitch at a Time Challenge 148

This week at One Stitch at a Time, our challenge is to use a digi! So, that's easy, sin't it?

This week, I worked with an image from Beary Dust - one I've used before, but which is definitely worth a second outing! Her name is Corey. 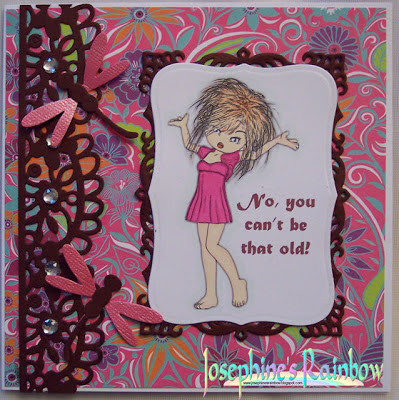 I love her pose - it just lends itself so well to so many captions!

In this instance, I've made a card for my sister's birthday, adding the sentiment in Photoshop Elements before printing. I cut the image with one of my Nesties and coloured with Promarkers. I've matted using a Spellbinders decorative label die. The paper is one of the gorgeous Kate Knight papers from a recent magazine freebie pad. The border die is from Sizzix, as is the dragonfly die. I finished with some sticky gems and that's it.

Our sponsors this time are Milk Coffee who have a gorgeous selection of images to choose from.

I was lucky enough to work with one of our sponsor's images this time - and it seemed perfect to me for the theme! It's called Lady with Antique Bicycle (although that bike looks remarkably like mine, and although it's not new, I don't think it's an antique!) 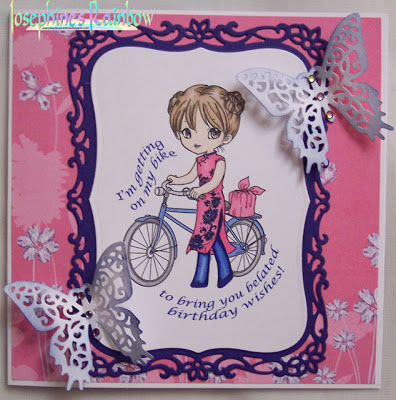 Isn't that a pretty image? I added the sentiment in Photoshop Elements before printing, then coloured with Promarkers. I cut the image with a Spellbinders die (labels 8) and cut a frame using the decorative labels 8. (And am I the only person who'd love to see Grand Labels 8 too?)

The paper is a Kate Knight design from magazine last year, and I finished with some Spellbinders die cut butterflies which I'v shaded with Distress Ink in Chipped Sapphire.

I hope you can join us this time. Go on, you know you need a belated card in your stash!

One Stitch at a Time Challenge 147

This week at One Stitch at a Time, the theme is Love! That can be a valentine theme, romantic love or any other sort of love you can imagine!

And I decided to make a card for my younger son's 21st birthday! 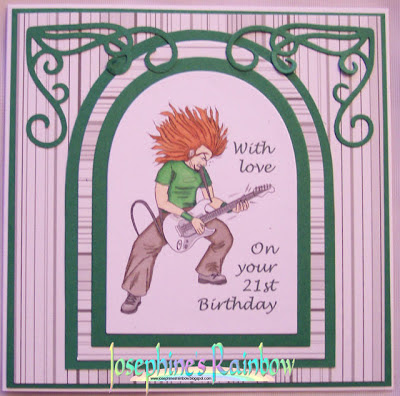 I've used an image from Pookie Designs. It reminded me, not of my son, but of of some of his friends! Always a keen musician, my son took part in many school concerts and band nights, and one band which appeared regularly, included one young man with very long hair who used to bend over his guitar and windmill his hair around in time to the music. It was rather mesmerising, and it became his 'trade mark' as he played some very heavy rock music.

I coloured the image with Promarkers, having cut it using a Sizzix die. I had to hand-cut the outer green layer using the outside of the largest die in the set. It doesn't seem to matter how big a set of dies is, I always seem to want another one ...) The paper is from Papermania, and I finished with a couple of corner swirls, also from Sizzix.

The Squirrel and the Fox where anything goes.
Posted by Josephine at 12:00 10 comments:

One Stitch at a Time Challenge 146

This week at One Stitch at a Time, we've got that easiest of all challenges - Anything Goes.

and you can win the latest set of collaboration images and papers.

This week, I worked with an image from IKEsART called Godshill. 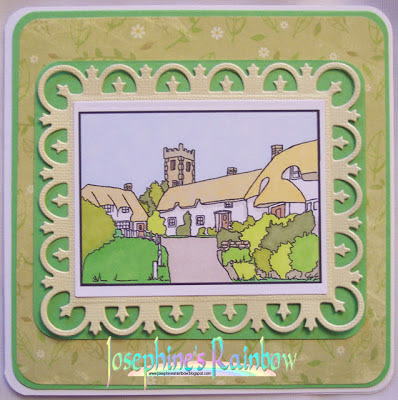 It's a lovely image to colour, and such a lovely reminder of an English village scene with those thatched roofs.

I've used some Serif paper and cut some Papermania Shimmer card using a Spellbinders die in my Big Shot Pro, and that's it!  It's the sort of card I like to have in my box because it's so general - male/female/birthday/getwell/hello - pretty much whatever you want to say!

Well, I managed to colour another of those Michael Powell images, and made it into a card. 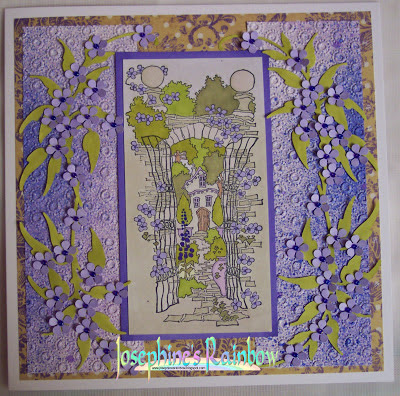 I intended to make a five by seven card, but loved those vining flowers in the image, so I wanted to reproduce something similar as a border. But, when I tried it out, the card was too crowded, so I switched to a huge eight by eight!

The background paper is from the Papermania Persimmon collection. The next layer is some lining paper spritzed with various mica sprays in violet and blue colours. The paper itself was kindly given to me by J at A Crafty Habit after I admired some work she'd done using the paper. It definitely copes better with a water-based technique than the papers I've tried before! Although it's already lightly embossed, I wanted something more definite, so I put it through my Big Shot Pro with a Sizzix embossing folder.

The vine tendrils are die cut using a Marianne die, and I used my Promarkers to ensure that the colour matched the stamped image. The individual flowers were punched, coloured with Promarker, and then finished with a single seed bead.

I must say that I do love these images, although they're going to make fairly big cards unless I leave the image pretty much unembellished.

This time at Crafty Cardmakers, we want you to create a fairytale scene. 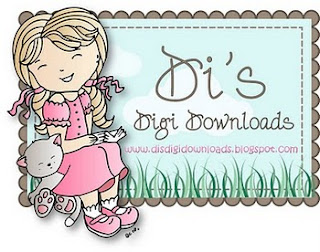 When I want a fairy scene, I immediately think a) get out the brayer and inks or b) head for the laptop and Photoshop Elements. Since my efforts with a) rarely meet my expectations, and getting out inks and the brayer was always going to be hard over the Christmas period, I went for the second option! (Yes, I'm quite cowardly too.)

I put the background scene together in Photoshop Elements using hand-drawn lasso shapes for the hills. The sunset sky uses a gradient, I added layers of hills in a variety of toning shades. The various trees are 'cookie cutter' shapes from the software, and the setting sun was added using the circle shape provided.

To bring life to the scene, I used a couple of Stitchy Bear fairies from her Rainbow Magic set. I do love these fairy images - they're so versatile, and in the set you've got a variety of poses so it's easy to combine a few to tell your pictorial story!

I matted the printed image onto black card, and used a couple of papers from my scraps box in the background - a textured, pearlescent paper and a heavily embossed matte paper - both in lovely golden yellows.

The scene takes a lot of the five by seven card in itself, and I didn't want to cover anything up, so I finished with a couple of Sizzix swirls to help frame the image.

One Stitch at a Time Challenge 145

Well, it's a brand new year, and I hope it'll be a happy one for you and yours. At One Stitch at a Time this week, our theme is 'New'. It can be anything new - new baby, new home, new year, or even new crafting goodies being put to use!

This week, I worked with an image from Kassal Crafts, and came up with this: 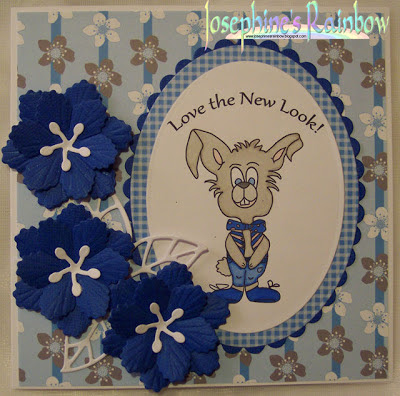 I thought that bunny just looked so pleased with himself in that waistcoat and bow tie! I added the sentiment in Photoshop Elements and coloured the image with my trusty Promarkers, then matted it onto some Papermania paper and card. The backing paper is also Papermania, and the flowers were cut using a Marianne die set with the centres from a Marianne poinsettia set.

Fresh Brewed where anything goes,

Digi Galore where anything goes (with a digi stamp),

Like most people, I do rather like to get a bargain, and when it's something I've had my eye on anyway, it's especially satisfying. So, when I saw some stamps with images from Michael Powell significantly reduced, I had to splurge! 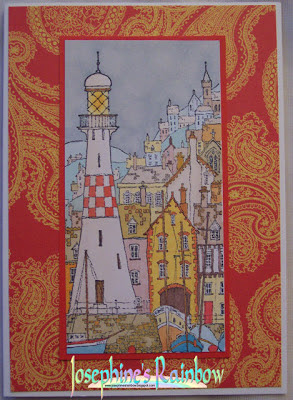 This is the first one I've coloured. I used my trusty Promarkers, and after matting, added some Papermania paper. There's so much detail in the image that I don't think it needs any further embellishment.