Our challenge this time is No Squares or Oblongs. So, we want to see circles and ovals - or anything else that isn't full of right angles!

I went for something quite simple this time. 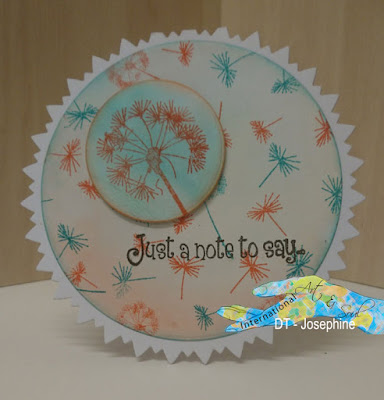 I started by making a card blank using a Tonic die. Its a rather jagged circle, but it's definitely not square. Then, I created a couple of backgrounds using Distress Ink, water and some Sheena's Stamping card. I used my two favourite colours here - Peacock Feathers and Ripe Persimmon. There's also some Squeezed Lemonade but it doesn't seem to have made much impact on the final result. I cut a large circle from the lighter of the two backgrounds, and stamped it with some stamps from a new set I bought recently from Printable Heaven. It seems that they now sell physical crafting bits as well as downloadable images. I then stamped an arrangement of larger dandelions and cut it into a slightly smaller circle, intending to use that as the focal point of the card, but when I tried it, it just didn't work at all. So, I stamped just one dandelion head on an off-cut and cut a much smaller circle. Both circles were edged with Distress Ink. To complete the card, I stamped a sentiment in Versafine ink to ensure a good, solid black. Now I've just got to decide what to do with the larger arrangement. I really liked it; it just didn't work for this project.

Our theme for this fortnight is Things with Wings.

I decided to make a retirement card for my sister. 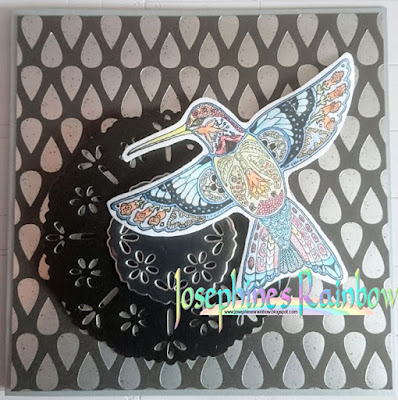 The image is from a Animal Spirit stamp called Hummingbird. I coloured the image with watercolour pencils before cutting it out. The background paper is from Dovecraft, and I've added a couple of die cuts from Spellbinders.

I used a scan of the coloured bird image to create an insert in Photoshop Elements.

I reversed the main image and added it, and a sentiment. Then I shrank the image and made a border top and bottom as you see. I added some yellow to match the bird's beak, and that's it.

I hope you can join us this time - I'm looking forward to seeing your Things with Wings!
Posted by Josephine at 12:00 4 comments:

Our theme for this fortnight is All About Boys/Men. Other than that, your project can be anything, any style, any technique, any colours.

I chose to make a birthday card for my husband who recently had a birthday. His preference is for plain and unadorned, so I mainly stuck to that. 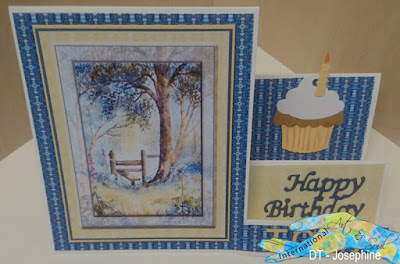 I know it''s a funny angle, but I wanted to show the Happy Birthday.

here it is so you get a better perspective on the image. 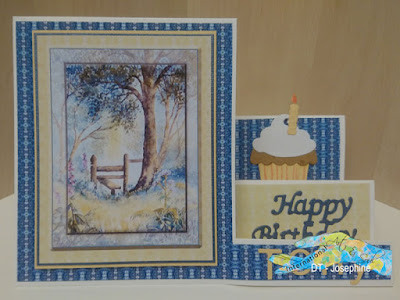 The image is from a Pamela West CD Rom from Joanna Sheen. While a lot of those images are very flowery/girly, there are some beautiful landscape type images too. Unfortunately, having come across a blank stepper card while clearing up, and deciding to use it, neither of the papers provided for this image seemed to work for the small areas you get on these cards. So, I took a small sample of the image in a mainly blue and mainly yellow area and tiled thse to get some papers that tone well. I combined the image with an outline and the yellow paper in Photoshop Element and added a bevel to give better definition before printing. I then die cut a greeting (not sure whose die that is), and my husband's name (using a XCut die) as well as a fairy cake (Marianne die, I think. It's pale blue.) I added a little shimmer (and colour) to the candle flame and shimmer only to the icing using Crafter's Companion glitter pens.

Now, a question. I often see this style of card being made, and I just wonder how people post them. (Obviously not an issue in this instance.) I rarely make this sort of card because I find that the varying thickness of parts of the card when folded leads to the card being warped and looking quite tatty. And that's before you compress it to any extent. So, do people make boxes for these cards? Or do they unfold them out so they're rectangular, leaving the recipient to work out how to display the card? (I know that easel cards can be a puzzle for some people, so could only imagine what they'd make of one of these unfolded. I used to make birthday cards for people at work which were passed around for signing, and with easel cards, I was often taken aside by one of the people signing it to warn me that the card needed mending. It didn't - it just wasn't obvious that the design was intended.)

Any ideas/suggestions will be welcomed. I do like this style of card, but unless I solve this issue, I doubt I'll be making many of them.

Our challenge for this fortnight is No Patterned Papers. 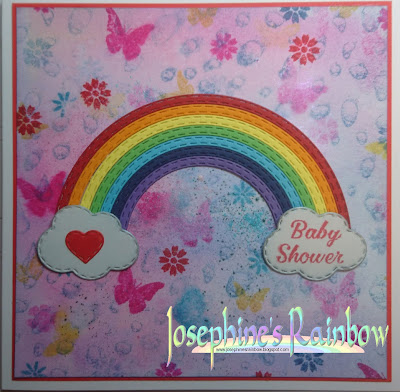 I started with some white card, and 'smooshed' it in some diluted Distress inks. Then, I added some images - flowers and butterflies - again in Distress Ink, using stamps from Printable Heaven. I sprayed the result with water, and repeated a few times. The last time I added water, I sprinkled on some Perfect Pearl powder to give a hint of shimmer.

The die cuts are from a Sue Wilson set, and I've added a sentiment from a stamp set from Creative Stamping magazine.

That's it! I do like the vibrant colours, but then I've got a thing about rainbows, as you might have guessed!