This week at Crafty Cardmakers, the challenge has been set by my team mate Kim, and her theme is 'It's a Bug's Life'. She wants your project to have an insect of some type as the focal point of the piece - so, adding a butterfly at the end won't count!

Our sponsors this time are 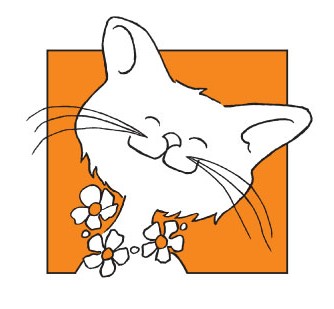 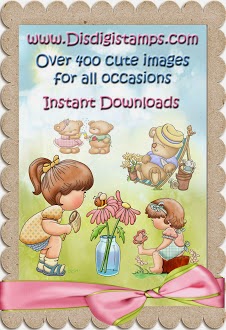 See the challenge blog for details. (There's a link in my sidebar.)

Now, I followed a link from a group I belong to, as the technique described looked interesting. It took me to this site where a lady called Pam Sparks has been using an inlay technique to make cards. Now, a while ago I bought a set of Sizzix dies and stamps, of which the centrepiece is a dragonfly, so I decided this challenge was the ideal time to combine the idea with the die, and this is the result. 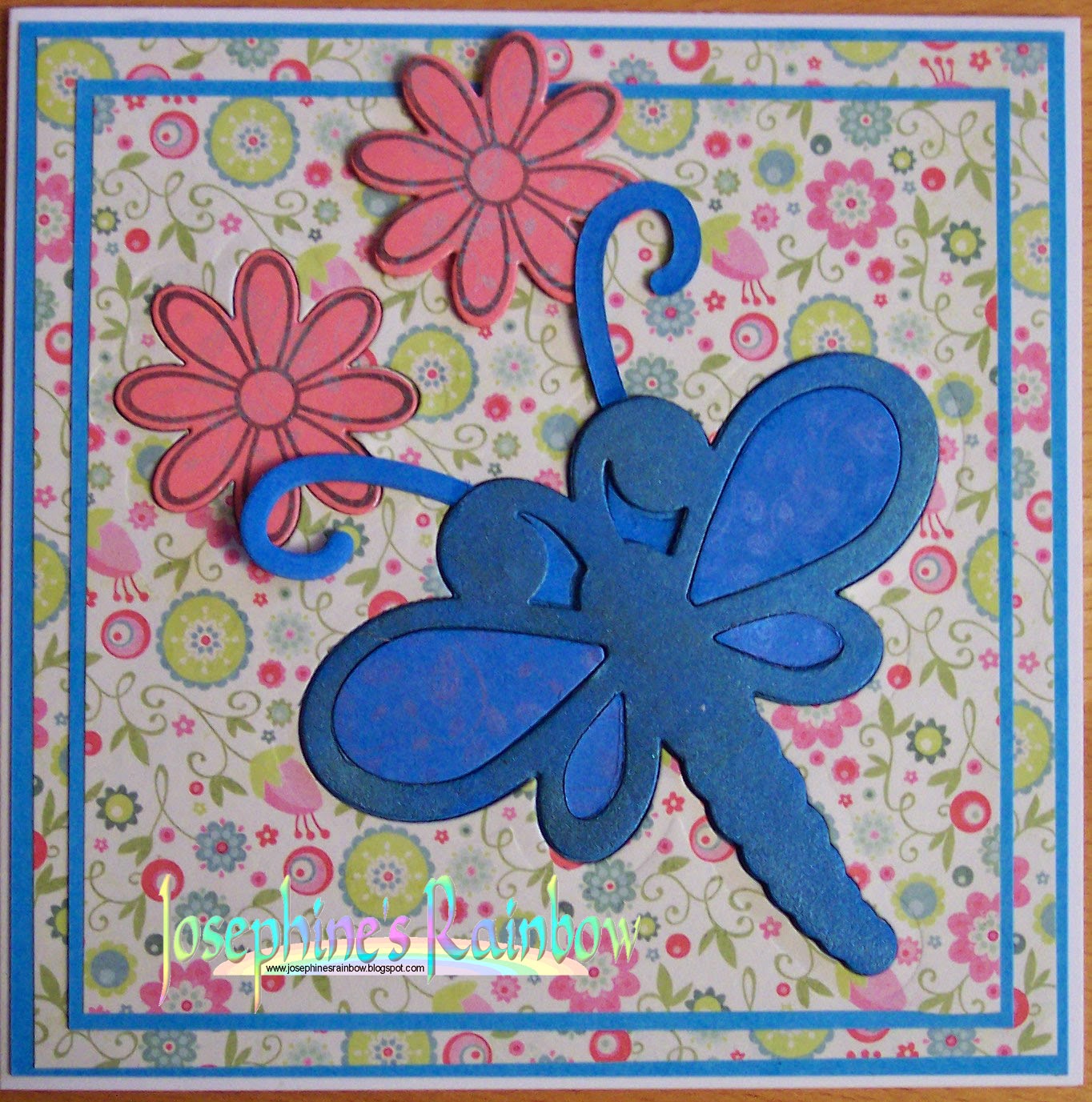 The first thing I did was to assemble the dragonfly. I've used both parts of the Sizzix die, and I added some Perfect Pearl in Smoke Blue to the 'outline', while I stamped the wings with Versamark using an Inky Doodles die before adding more Perfect Pearl in a pink shade. I've actually done several layers of inset here. The wing pieces were inset into the outline, and raised a little. The flowers were also stamped with Versamark and shaded with Perfect Pearl. The lower flower is snset into the background while the upper one is layered on top, using some glue gel to give it a little more prominence. The paper is from a magazine freebie pad. 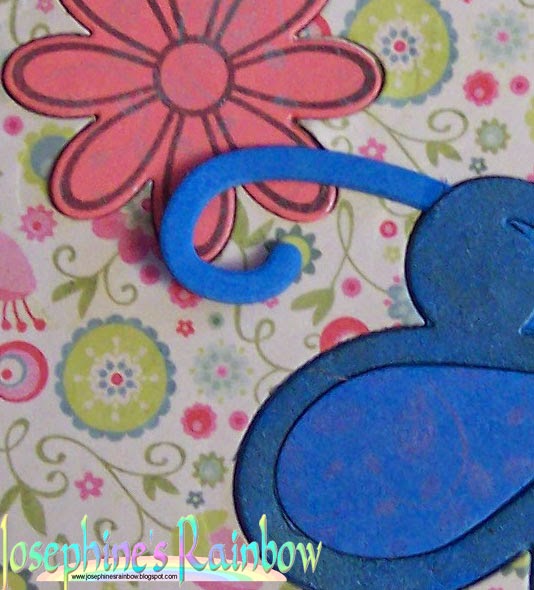 Here you can see the insetting a little more clearly, and you can even spot the very faint patterning on the flower and dragonfly wings.

One Stitch at a Time Challenge 210

This week at One Stitch at a Time, we're having another 'anything goes' challenge, so show us what you've been up to!

We're sponsored this week by

This week, Hazel chose an image from Cootsy Creations called Squirrel, which consists of a digi stamp and a paper pack. 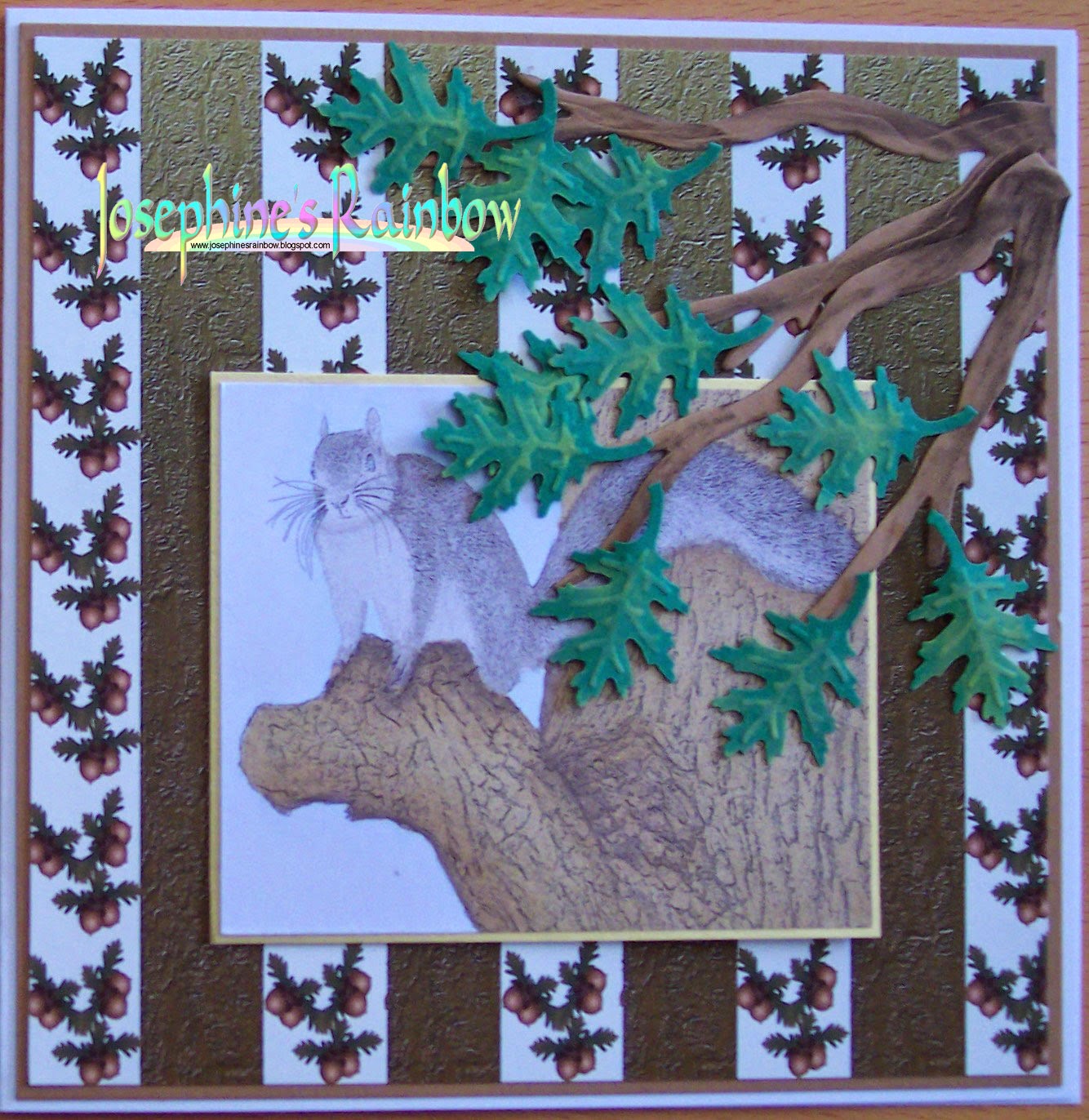 There are four gorgeous papers in the pack, and because I couldn't decide which to use, I decided to combine two of them in stripes as you see. The image is coloured with Promarkers, and I've embellished with some branches and oak leaves. The branches were cut using a die from the Susan's Garden range, and the leaves were punched. Both were highlighted using Pan Pastel.

One Stitch at a Time Challenge 209

This week at One Stitch at a Time, we want to see your favourite things! That can be images of something you love or a favourite technique or favourite colours ... Lots of scope here!

This week, I got to choose from Stitchy's collection of images which is perfect for this challenge because my one of my favourite things to create with are Stitchy's silhouettes. And one of the advantages of having been on the OSAAT team for a while is that I've got quite a selection! Another favourite thing for me is designing on my computer. And among my favourite images are fairies. So, here's what I came up with! 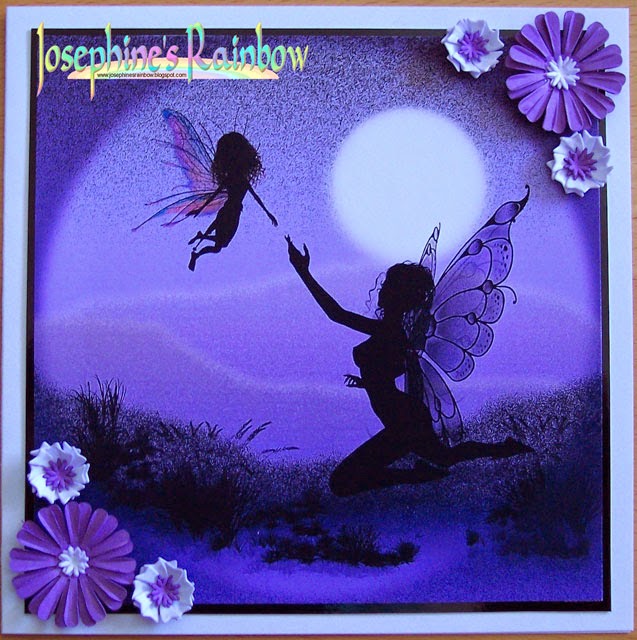 For this, I created a background in Photoshop Elements using various shapes and gradients. Then, I added various images from Stitchy's selection of ground-cover silhouettes called Grazin' in the Grass. I then added two of Stitchy's fairy images - the larger one is called Reach and the smaller one is from a pack called Rainbow Magic. Once everything was composed, I copied everything, cropping it using a circle, then faded the background before pasting the circle on top. Apart from matting, the only other addition is another favourite - hand-made flowers. These used dies from Crealies and Cheery Lynn.

This time, at Crafty Cardmakers and More, the challenge has been set by Fiona, and she wants to see 'a floral profusion'! So, flowers, and the more the merrier. 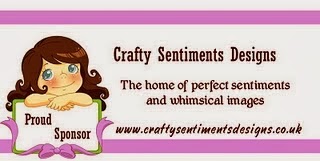 I do have a bad habit of taking things literally, and when I saw the challenge, I decided to do a card with loads of flowers. I used an image from our sponsor called Butterfly and Ladybird. 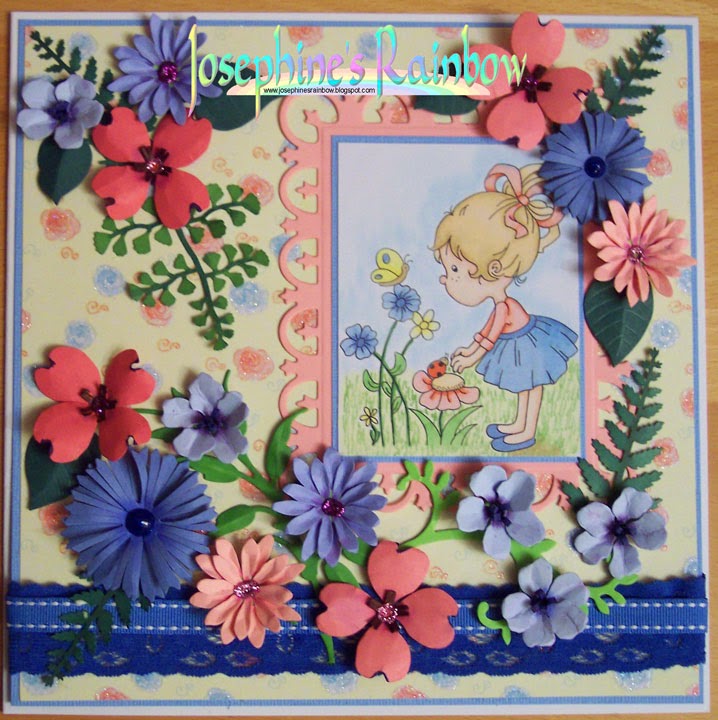 Because I wanted to add lots of flowers, I made an 8 by 8 card, but sized the image similarly to what I normally would for a 6 by 6. The image is coloured with Promarkers, although I've shaded the sky with Pan Pastel. The background paper is from Papermania, and I've matted the image onto a Spellbinders die cut. The lace and ribbon are from my stash. The flowers are mainly made using Susan's Garden dies, although I did use one Floral Delights die from Tonic Studios. The greenery comes from a variety of sources - there's a Spellbinder's die, a Marianne die and a couple of Leone M punches as well as some of the leaves that 'came' with the flower dies. I've tinted flowers with Promarkers and Pan Pastels and finished them off with glitter glue or liquid pearls as appropriate.

I must admit, I really do enjoy making flowers. I spent most of a lazy Sunday making that lot while I caught up on some things I had downloaded on my iPlayer. Like colouring, I find it very relaxing - at least, once I've got it all die cut/punched and I can start colouring, shaping and assembling.

So, what are you waiting for? Let's see some flowers!

One Stitch at a Time Challenge 208

This week at One Stitch at a Time, all we want you to do is to use a digi. Even better, use a digi from the Stitchy Bear shop and you could win first prize, and you can enter as many times as you like!

This week, I chose an image from IkesArt called Dragon which is available from the shop - there's a link in my sidebar. 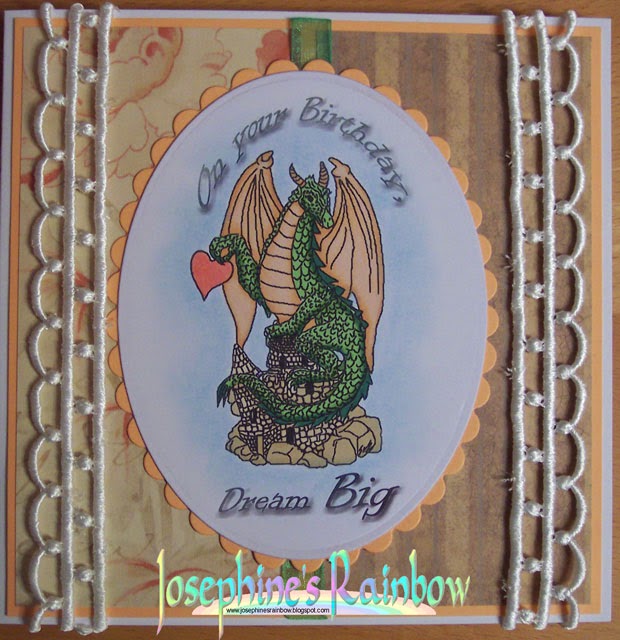 There's a sentiment available with the image, but I preferred to use my own - one of the wonderful things about digis! I added my sentiment in Photoshop Elements before printing. I coloured mainly with Promarkers, although the heart uses pencil and the background is Pan Pastel. The papers have been my stash for a very long time - they're some offcuts I bought online. I've used Spellbinders dies and some braid I picked up at a craft show. (Going there again today, so I won't be around to do my link ups until later.)

Fan-Tastic Tuesday where anything goes,

I don't make a lot of Easter cards - just for close family who we don't see regularly. I like to retain a religious aspect to the design, but also to keep a 'spring' theme. Unfortunately, most of the available digis and stamps tend to either be very religious or veer off to chicks, eggs and, oddly enough, rabbits. (I don't really 'get' the whole Easter Bunny thing - it seems to be a recent innovation and I do my best to avoid it!) So, I decided to design my own cards from scratch, using some pretty floral papers from the Flower Power CD Rom I've had for a few years. 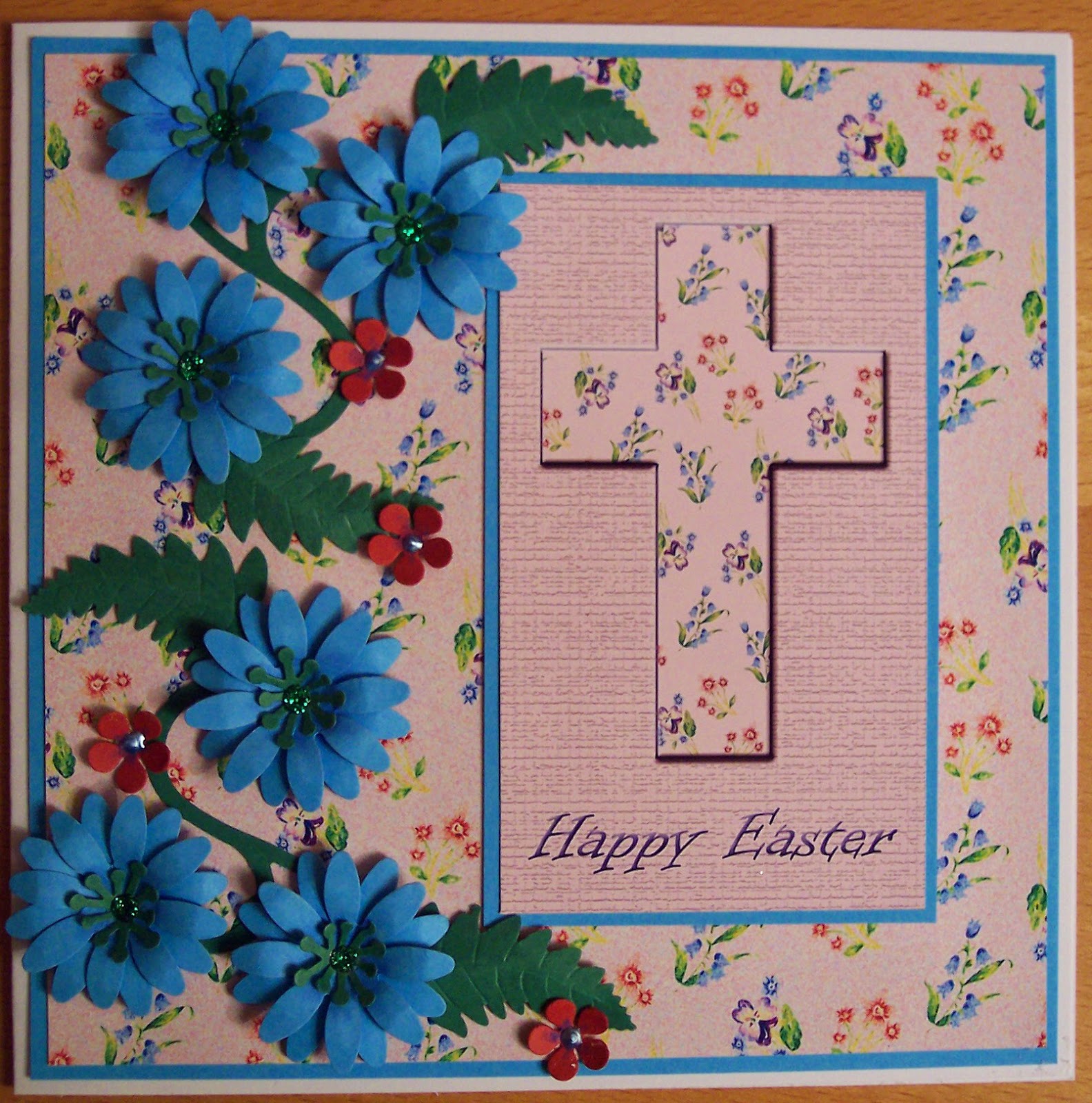 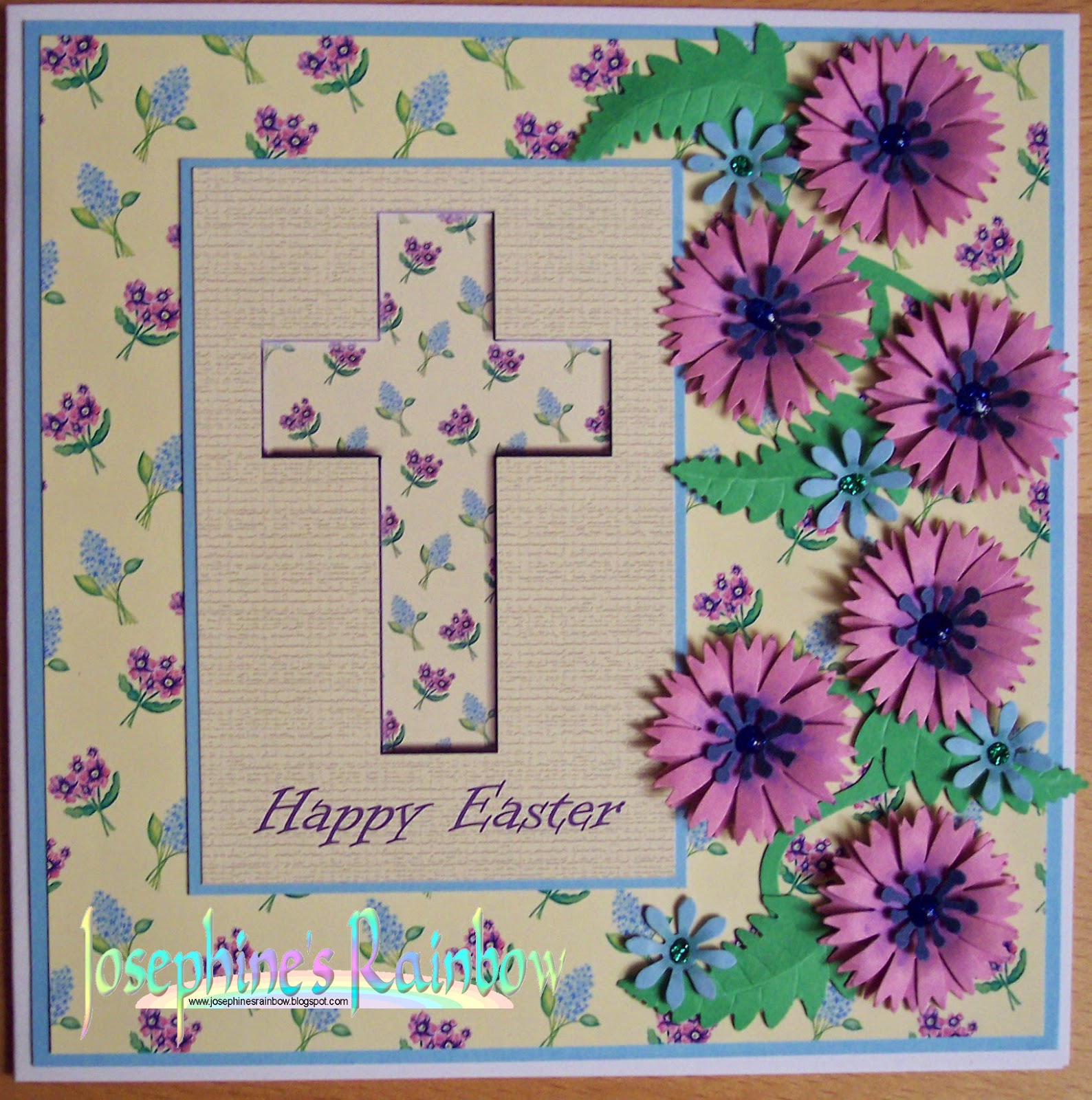 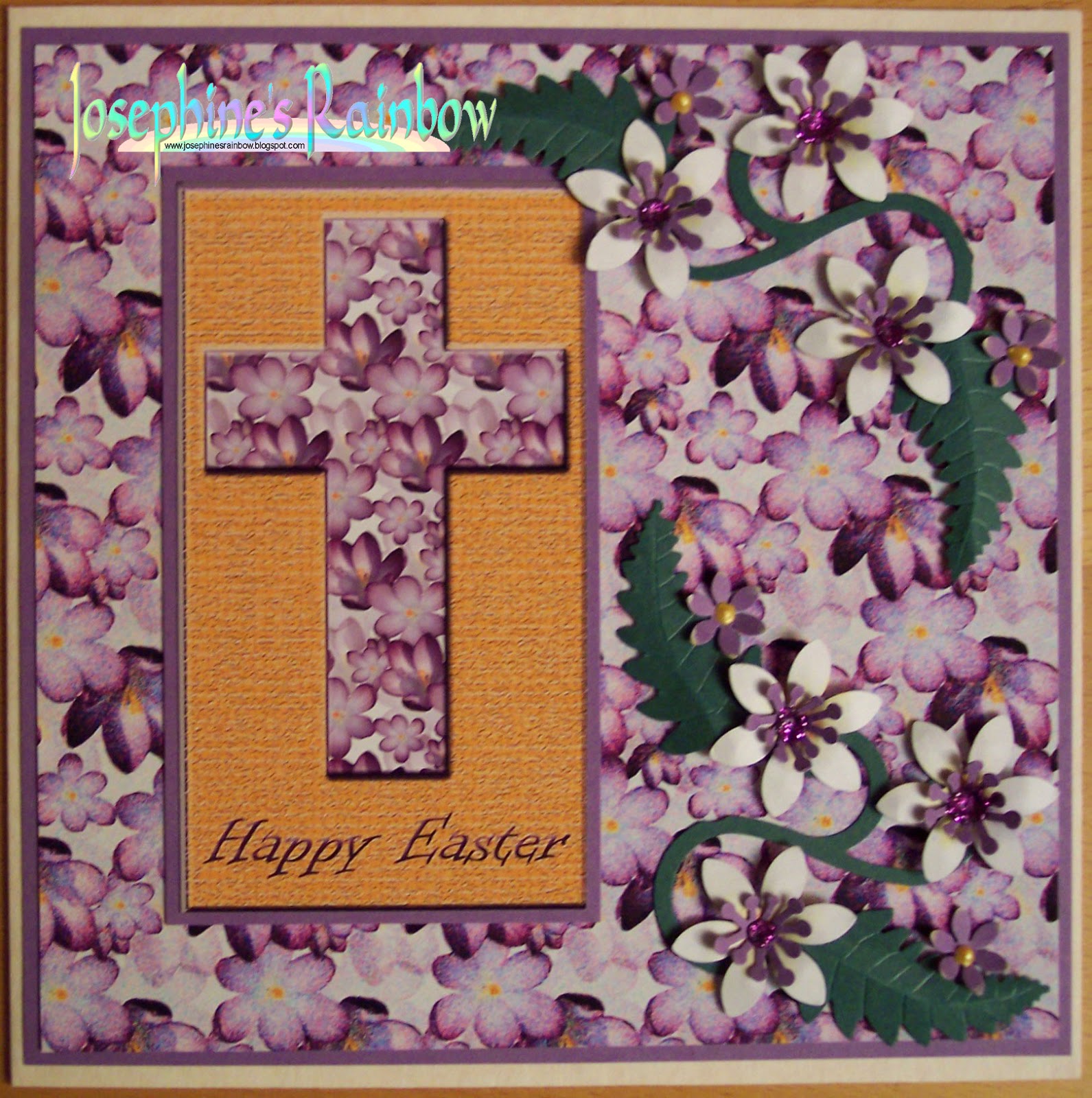 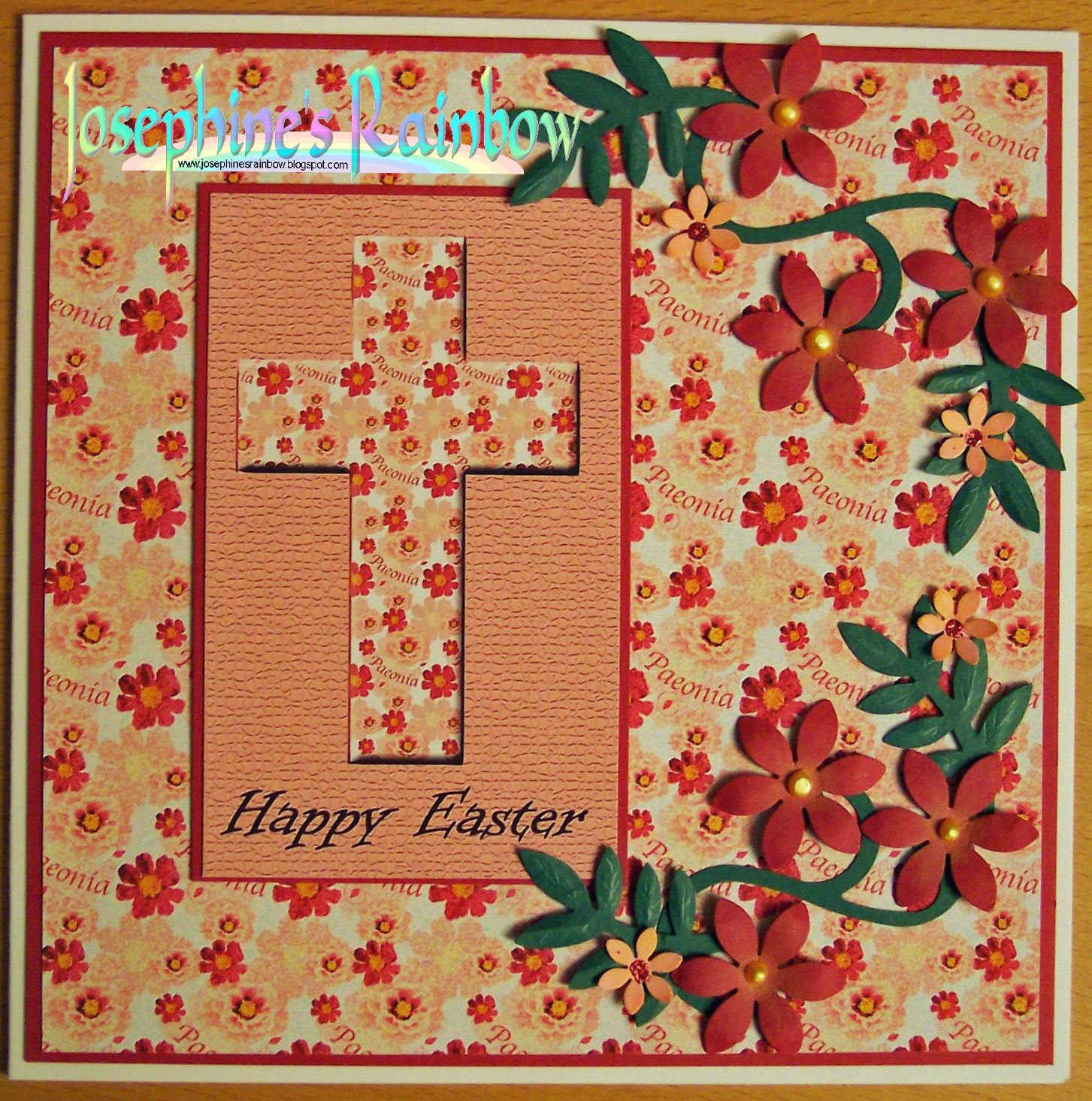 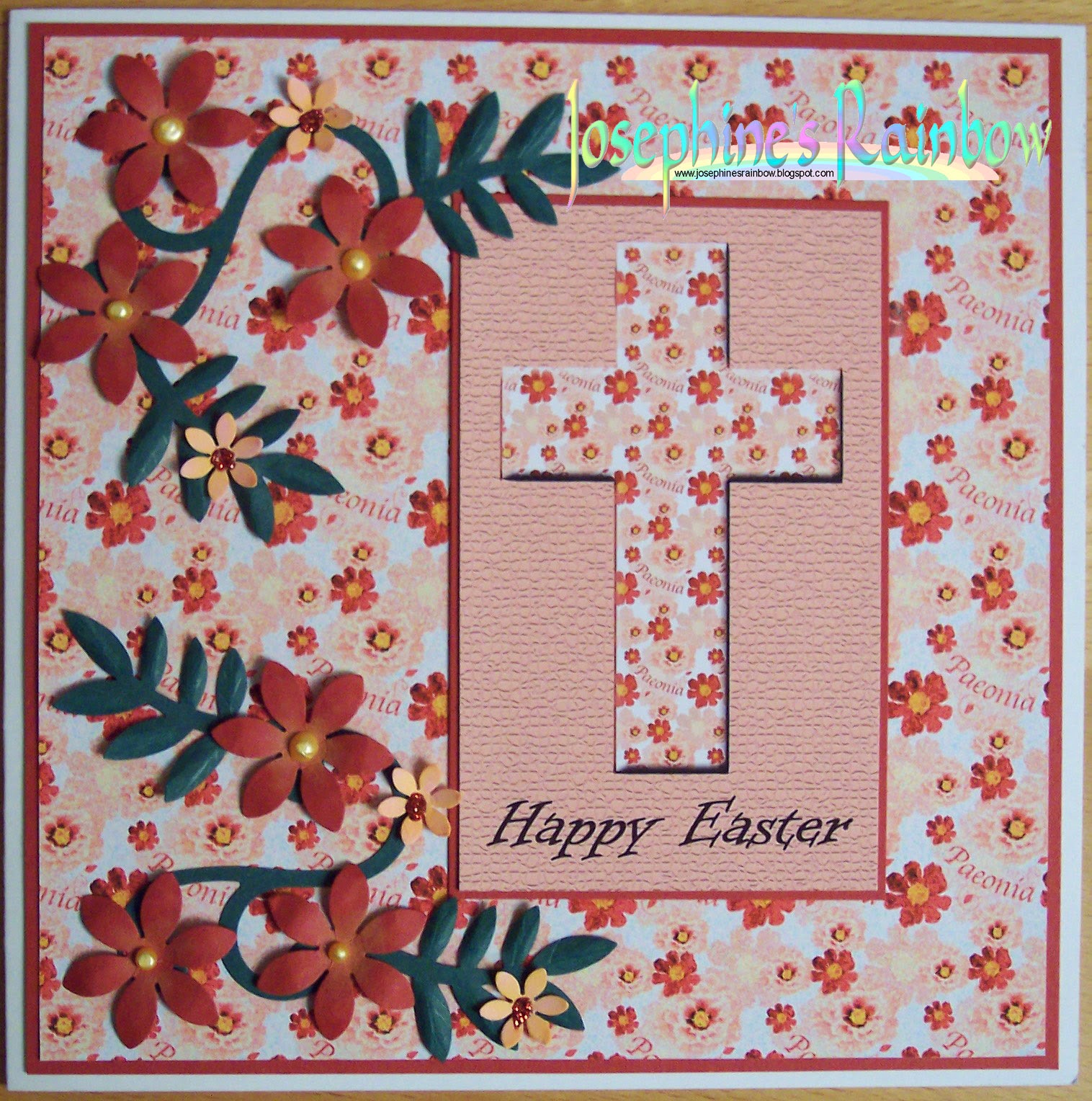 I played round in Photosho elements until I got the toppers the way I wanted them, and, after printing, layered as you can see. To finish, I made some punched flowers.
Posted by Josephine at 21:30 3 comments:

One Stitch at a Time Challenge 207

This week at One Stitch at a Time, we want to see flowers! They can be in the image or as an embellishment - the choice is yours.

This week, I chose an image from Ike'sArt called Poinsettia Cluster. Yes, I've started my Christmas cards. I normally try to get started during the Easter holidays, and they started this weekend, so I'm just about on schedule. 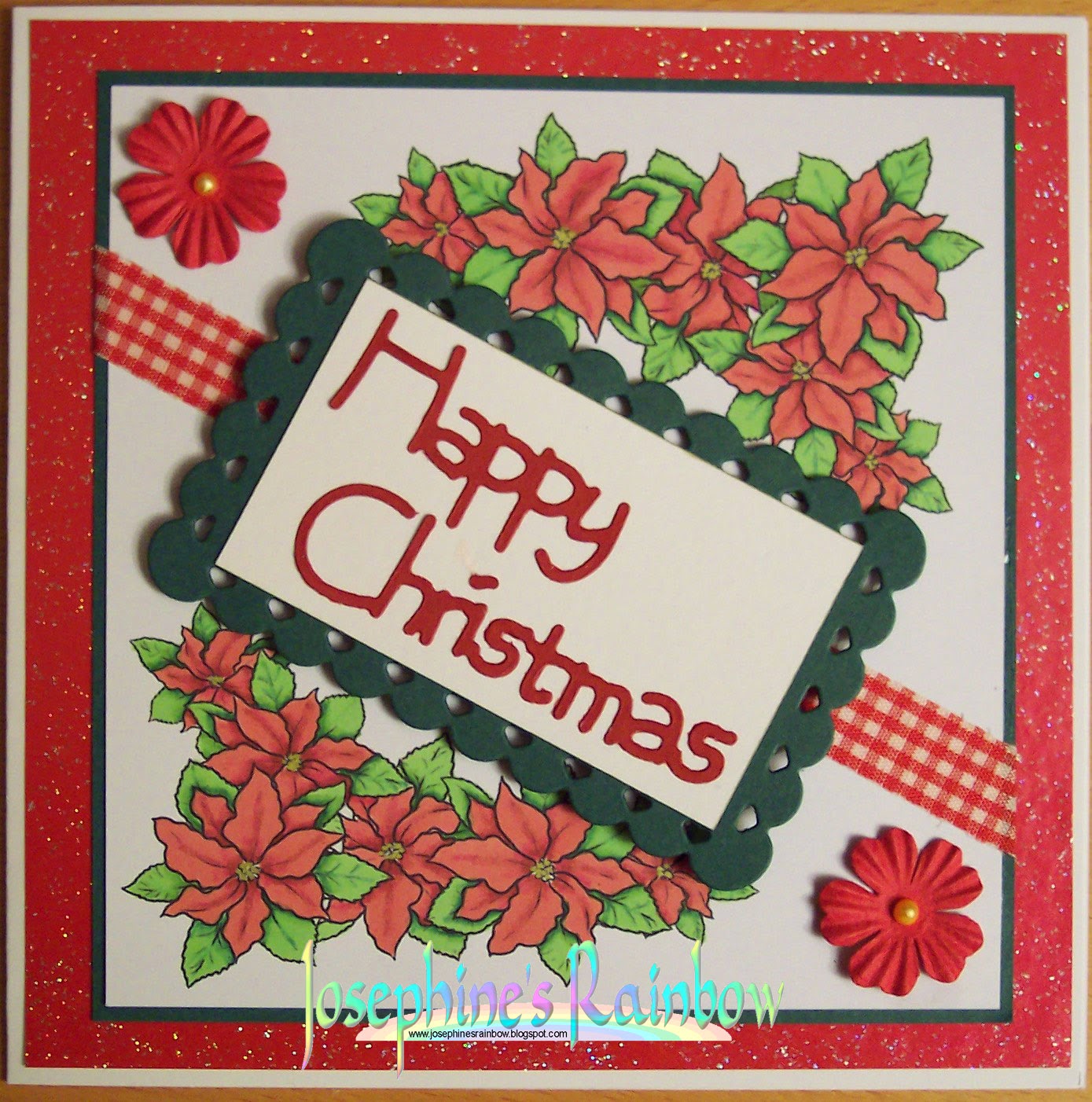 I arranged two of the image in Photoshop Elements before printing. I coloured using Promarkers and Flexmarkers and finished each flowers with some spots of Letraset Metallic marker in gold. I die cut the greeting using a Britannia die (not one of my favourites - it's not easy to get a clean cut.) I added some sticky ribbon (from Tiger), some glitter paper and a couple of paper flowers I've had forever, finishing the flowers with some Liquid Pearl. So, nothing too complicated, and what's more, I'll even be able to post the result!