The challenge for this fortnight is to add some texture to your creation.

I immediately thought of embossing folders, and since I've recently got some Apple Blossom folders, I started with that. 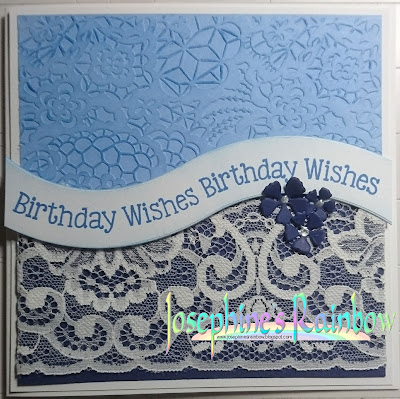 I used a die and stamp (also from Apple Blossom) as we as the folder. I lightly inked the embossing to bring out the detail, then added some lace and a few flowers cut using a Crafter's Companion die set.

I hope you will join us this time.
Posted by Josephine at 12:00 4 comments:

The challenge for this fortnight has the theme: Choose a Movie, or in my version of English Choose a Film. Movie just sounds like US usage to me, although I know a lot of Brits use it too these days. But I grew up going to the pictures to see films or even a big picture. Funny how language changes, isnt it?

Anyway, enough preamble. I chose the film White Christmas which, of course, gave me lots of options. I chose to get out my Thomas Kinkade CDRom, and I chose an image and background from that. 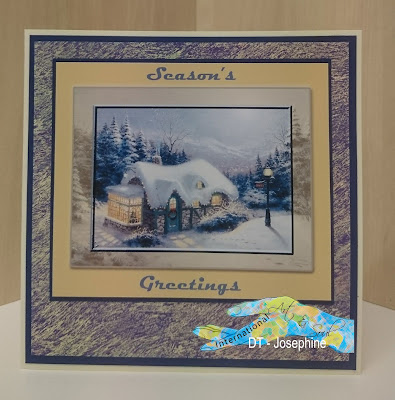 I did some work in Photoshop Elements before printing, adding a faded layer of the image below a cropped version, and adding s bevel or two, as well as a sentiment. I then matted the printed result, and combined it with a rather nice 'paint effect background, and that was it.

The challenge for this fortnight is Winter Fun.

I've made another Christmas card, using a digi-stamp. I used to use those more often than not, but since I got my craft room (and my Tim Holtz platform), it's just as easy to do traditional stamping, so I've been doing a lot more. Anyway, back to this project. 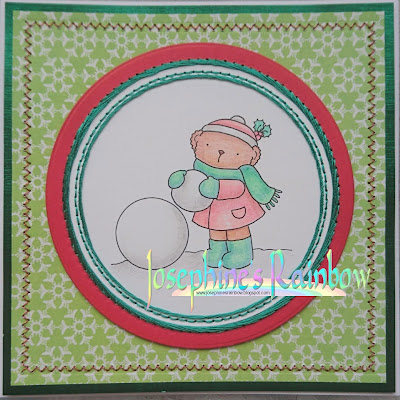 The image is from Heather Ellis and was on a magazine freebie CDRom several years ago. I coloured it wiht pencils, cut and pierced the image and other layers with Tonic dies and added stitching. Nothing too complicated, and the time spent stitching the layers was very restful!

Our first challenge of 2019 at International Art and Soul is on the theme of Cats and/or Dogs. Now, I'm not a pet owner. I love cats, but my husband hates them, so it's really not an option. But, some years ago, I bought a CDRom (I think from Joanna Sheen) called Ivory Cats and I've used that to make this: 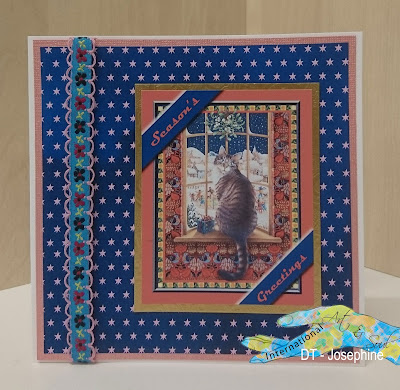 To be honest, I've used this CDRom more for the gorgeous backgrounds than the images, but many of the images are lovely too. I did a little work in Photoshop Elements before printing - adding an extra frame and the wording. Then I matted the result onto embossed gold card. The background is rom the CDRom too. And then I finished the card with some gorgeous braid Ive had for ages but which seemed to match perfectly.