Circle Book Card for a Colleague

Someone at work wanted something special for her daughter. She's just finished her A levels and is hoping to go to university after the summer. She's got dreams of writing screenplays, and when asked what her favourite activities of the last few years were, answered, 'Drama, singing, football and skateboarding'. So, armed with that, I set about finding images which would let me make a special card and box for her.

And here's what I finally came up with! 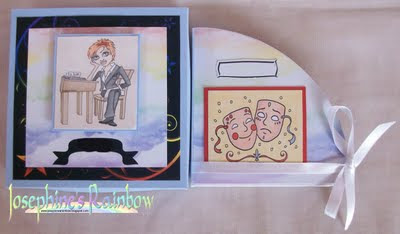 Here, you can see the front of the card, and the box I made to go with it. The schoolgirl image was kindly drawn for me by the very generous Eiglas, and coloured with Promarkers. The background papers on the box lid are from Panda Bear Designs. The drama mask image is from Dulemba. Both the box and the front of the card have the recipient's name on them, but I've brushed them out of the photos. 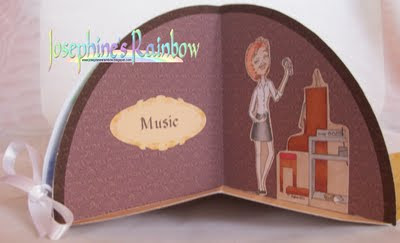 Here's the first of the 'scenes'. The images here, were again drawn by Eiglas, and coloured with Promakers. The background of the walls and the floor were generated from textures available in Namo Web Editor. The 'Music' sign was generated using Photoshop Elements. 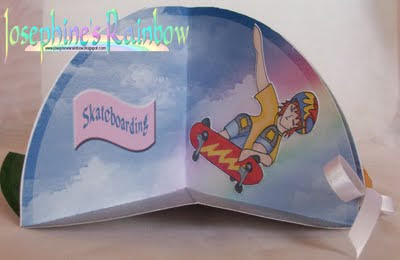 And the Skateboarding scene. The image this time is by Hope Jacare, and again coloured with Promarkers. The sky is by Panda Bear Designs, and the sign was generated in Photoshop Elements.

And the Art scene: 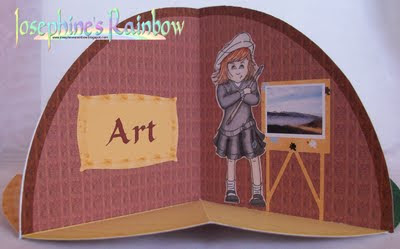 The artist is from Sassy Cheryl, again coloured with Promarkers. The easel was compiled in Namo Web Canvas and added to the background, and the Art sign was again compiled in Photoshop Elements. 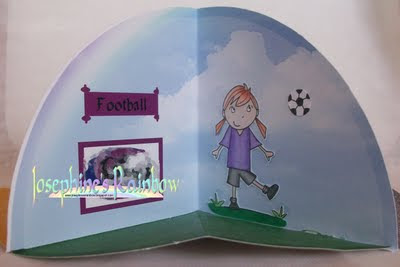 And the final scene is 'Football' using an image from Digistamp Boutique, again coloured with Promarkers. The sky is again from Panda Bear Designs, and the sign was generated in Photoshop Elements. I included the badge of a team she plays for, but I've brushed out the detail in the photo to preserve privacy. 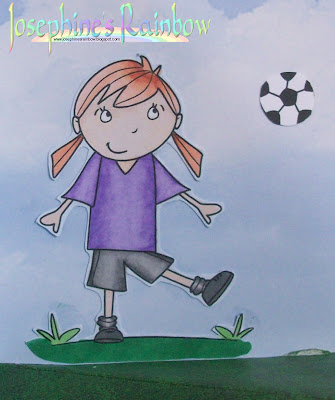 And finally, a close up of the image.


I'd like to enter this card into the following challenges:
Crafty Catz where the theme is 'fancy folds',
Just Add Ink where they want us to use some colouring method. (Most backgrounds are computer-printed, but all the girls are coloured with Promarkers.)
Challenge up your Life where they want circles,

Oh my this is such a fabulous card I love the images and the colour theme,

Thank you so much for joining us at Crafty Catz this week, for our Fancy Folds Challenge,

wow love the detail, great card and thanks for joining us at CC this week

Great card - so personal and lots of detail!! Thanks for joining us at PFP this week, Juliexx

Hi Josphine Im sure she will be delighted with your box card its gorgeous and full of fun and detail. hugs Shirleyxxxx

Hi Josephine,
This looks wonderful. The different scenes all look fabulous. Thanks for joining us at Passion For Promarkers this week.
Hugs,
Andie xx

So fabulous Josephine.
Thanks for joining us at PFP & good luck.
Hugs Emma x

Wow, absolutely stunning!!
Thanks for playing with us at Challenge up your life!