This time, at Crafty Cardmakers, we want to see your spots and stripes!

We're sponsored this time by One Stop Cards 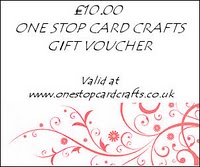 I decided to do something a little different (for me) and went for some digital paper piecing. My success rate for traditional paper piecing is poor - I've never been happy with a result - so I wondered how it would work.

I searched my digital images for something suitable, and spotted this one from the Windows collection by Lillyboo. I bought the set ages ago, and have only used one until now. 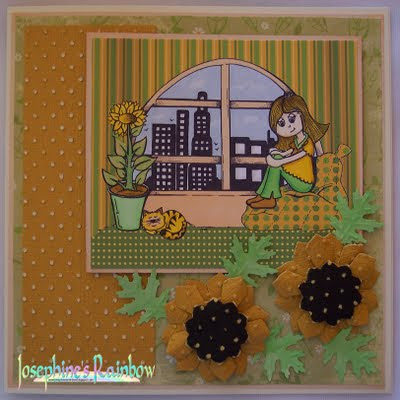 I first sized the image in Photoshop Elements, then created three simple repeating patterns - two dots and one stripes - in 'sunflower' colours. Then I used the magnetic lasso tool to identify an area I wanted to fill, and filled it with an appropriate pattern. In the case of the bean bag, that also meant I'd lost the inner detail, so I repeated the magnetic lasso on the image layer, and copied that part to place on top.

The wall and carpet areas didn't have any detail, so they were simple fills, but I thought a bit of shading in the wall might give the impression of a shallow window recess, so I added some gradients. I think it works fairly well, but it's not too obvious in the photo. Once the result was printed, I coloured the rest of the image with Promarkers, and gave an impression of clouds using the blender pen.

The backing paper is from a freebie pad called Picnic in the Park by Serif. Then I pulled out some Coredinations card. The panel has been embossed in my Wizard and then sanded to bring out the dots. The flowers were cut using some of the Blossom 2 set from Spellbinders. The larger flowers were embossed but not sanded, and I removed every second petal in the upper layer. The top layers were cut from black Coredinations, embossed and sanded to reveal the goldy-yellow lower layer. The leaves were punched from white card and coloured with Promarkers.

Lovely card, great view through window too. Thanks for playing Love Cynthia x

What a lovely card! Love the scenery! Thank you for entering our Anything goes/Summer Fete blog hop challenge over at PCJ.

This is gorgeous Josephine. It made me smile as soon as I saw it. The flowers are adorable and you have put so much work into the main image and it looks like it was made that way so you did a perfect job. I am so impressed you made your own papers and patterns on the computer, well done!

Cute card!! LOve the scene!! Thanks for joining us at PCJ anything Goes challenge andd Blog Hop!! HUgs xx

This is so clever, the way your have made the image look like a room in the house which your girl is sitting in, the buildings opposite the view from her window! Perfection

What a funny card,,,,,I love how you colored it,,,,thanks for sharing

What a sweet card!! Love the flowers!
Thanks for joining the Just Some Lines Saturday Challenge:)

very cute image...and lovely papers...thanks for joining us at just some lines

OMG I'm so impressed. When I read 'digital paper piecing' I imagined you printing it out several times and then cutting and sticking. But not you! I bow down before you, lol. xx

Thanks for playing along with Paper Crafting Journey. What an awesome card!
Looking forward to seeing more of your work!
Love,
Laura PCJ DT

Oh Josephine that is gorgeous such a pretty image and the scene behind is fabulous. hugs Shirleyxxx

love this it's gorgeous gorgeous colours too
gill x

I love this card, what a great little scene. Thanks for joining us at Sir Stampalot this month.
Pinky

Fantastic creation
Thanks for joining us at Sir Stampalot challenge this month
and good luck!