This weekend was the BSSB show at Alexandra Palace. I went on Saturday - the first time I've gone to the spring show. I arrived at around ten, and was amazed to find that there was a queue snaking all the way around the Palm Court area! But, it didn't take too long, and I was soon in among the stalls.

I bought a few things (surprise, surprise!) I'd intended to look at dies, and I got a few of those. I also picked up a couple of Debbi Moore CDs and a few bits and pieces to put together for my sister. She's having a knee operation next month and will be fairly immobile for a while after that. It's the fifth operation she's had on that knee in the last few years, and she hates being stuck in the house. She's not a cardmaker, but I thought that this might be a good time to start! I picked up some die cut decoupage sheets, some paper, and some sticky things. I know she's got a very basic trimmer, but that's about it, so I had to keep things simple.

So, what've I been up to? Well first, I've been trying out my dies. I'm constantly drawn to the lacy filigree type of die, and they all seem to take some effort to cut properly. So, I've taken some time to work out how they go, and I've spent some time looking through the CDRoms. 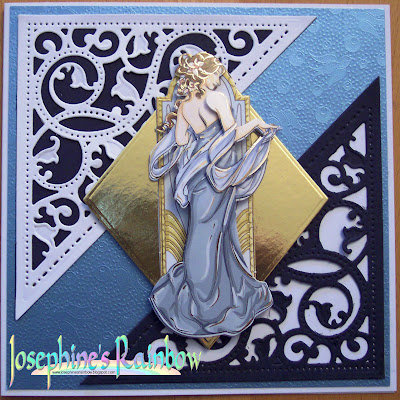 This uses one of the dies - the large corner from the Spellbinders Gold Elements set. I've cut it in both navy and white card, and cut a plain triangle in both colours too. I've used some embossed blue metallic card, and some die cut decooupage I bought for myself which I mounted on some gold mirror board cut with one of my nesties. 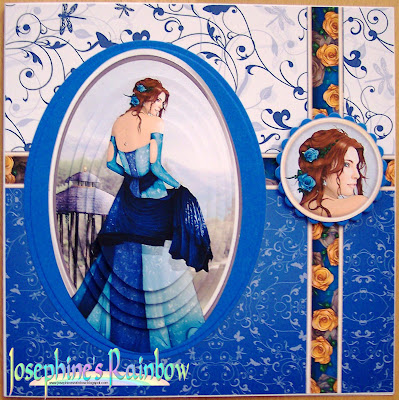 And this one uses elements from one of the CDroms. It's Debbi Moore's Evergreen disc. I was surprised at how much her CDs have changed. I bought one many years ago, and it was mainly some public domain images. The newer CDs are much more limited in scope from my perspective. The Evergreen disc has just two main image in various colourschemes and on a variety of backgrounds. There are some gorgeous papers, though, and some decoupage and pirimage sets. I imported the various bits I wanted into Photoshop Elements and put the backing paper together as a single element - complete with the flowery 'ribbon'.

Mema's Crafts where anything goes.
Posted by Josephine at 17:54

Good Morning and a warm welcome to our challenge at Forever Friends "DIE's/PUNCHES...... your creation is so beautiful and you are so creative and good luck with the challenge hope to see you again next time DT Member Sandra H xx

Stunning! Fabulous image, and such striking colours. Thanks for sharing at Card Crafter's Circle!

Both makes are amazing works of art! I love your dies and how you've used them. My friend went to the same craft show last weekend! I'm all the way over in the US and we just don't have them as you. How fun! Your sis will be making cards in no time! Very thoughtful of you. Back to your card- very lovely work! Thanks so much for joining us at Forever Friends Challenge this fortnight!
Manderly
xxxooo