A Couple of Birthday Cards

I had to make a couple of cards for upcoming birthdays. The first is for my nephew who's turning 21. He's into bikes, so this decoupage from Imag e nation seemed idea. 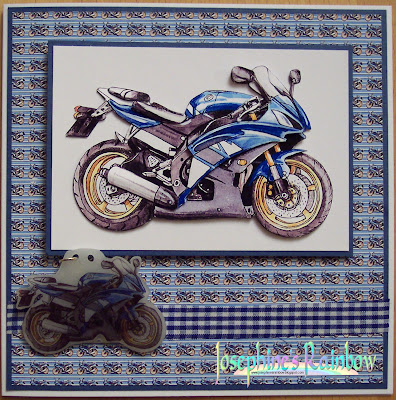 I used a small version of the image to tile into a background paper over some Photoshop Elements generated stripes, and a larger version to print onto some shrink plastic. I've personalised the card inside, but won't show because I'm very wary of putting other people's names online. The ribbon is one of those pre-sticky ones from Tiger.

I'd like to enter this card into the following challenges:
Digital Tuesday where they want something masculine,
LEJ Designs where they want us to 'show us your ribbons',

The second card is for a colleague. I made this one a while ago. While the card was being passed around at work for signatures, one person implied that she'd like to keep the card for herself rather than passing it on. So, her birthday's coming up now, and so I did something similar. 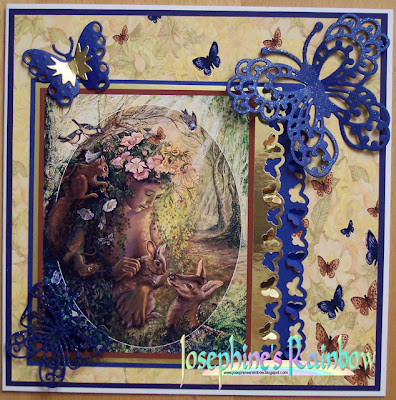 I made it into an 8 by 8 card because these image from the Enchanted Dreams CD are too detailed to print any smaller. The paper is from the CD too, and I've used a Martha Stewart border punch and butterfly dies from Spellbinders, and Marianne. To give them some sparkle, I sprayed the butterflies with Crafter's Companion Spray and Shine in irridescent.

I'd like to enter this card into the following challenges:
Cute Card Thursday where the theme is 'Butterfly Kisses',
Creative Moments where they want 'things with wings',
Flutterby Wednesday where it's an open challenge,
Catch the Bug where anything goes,
Posted by Josephine at 15:35

Wonderful cards! Thank you for playing along with my Flutter By Wednesday Challenge!

A super card, thanks for entering the lejdesigns Challenge
Janet

Wow, both of these cards are gorgeous! Love the images and your designs.

Wow! These are both fabulous! Thanks for joining us in this weeks Anything Goes challenge. Hope to see your wonderful work again. Good luck!

Awesome cards! Thanks so for stopping by! We appreciate you sharing your creativity with us in our April “anything goes” challenge at Catch The Bug! We appreciate you! ~~Sammibug~~ DT Member For Bugaboo Stamps

Both fabulous cards!
Many thanks for joining in the Cute Card Thursday Challenge this week!
have a great weekend, Debxx

Thank you so much for joining out 48th Challenge 'Show Us Your Ribbons' over on the LEJ Designs Challenge Blog.
I love the great male card. The image is brilliant and the matching backing and shrink plastic charm looks wonderful. Great card that any man would love.
Thank you so much for joining us this week and I hope you will join us for more of our future challenges.

Both cards are fabulous, but that second one is really awesome! Love the butterfly on the right and your image is fabulous. Thanks for joining the Flutter By Wednesday challenge this week.

Great cards, thank you for joining us at Creative Moments this fortnight
Ruth x