A Couple of 70th Birthday Cards

In the last week, I was asked by two different people to make 70th birthday cards for two different men. They've got fairly different interests, so they turned out rather different, although I tend to make my 'male' cards fairly plain as I know my oh and sons don't like things to look 'fussy'. 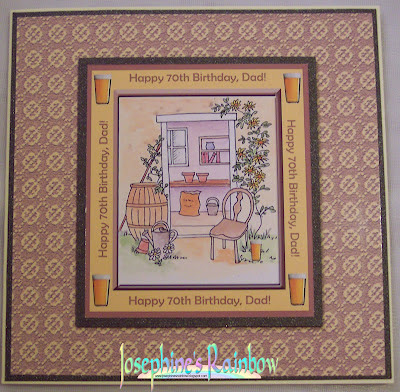 This gentleman, apparently likes to sit outside in or close to his shed, drinking a beer. So, I adapted an image from the Joanna Sheen CDrom of images by Pamela West by adding a beer glass! I designed the background paper using colours from the image, as the papers on the CD tend towards the floral! 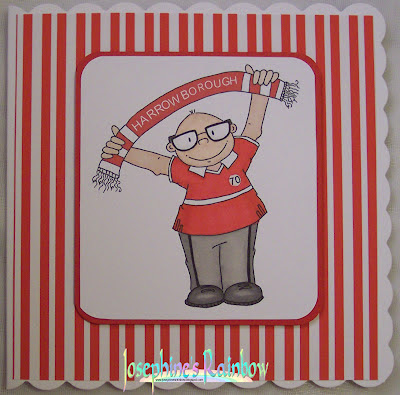 The second gentleman is a life-long supporter or Harrow Borough Football Club. I used an image from Pollycraft, which I adapted using Photoshop Elements to give him a 70 badge, and to add the words to the scarf and to colour it red. I coloured the rest of the image with Promarkers, and put the stripy paper together in Photoshop Elements.

And those are both examples of why I love digital images - you can add those little details that personalise  a card.

I'd like to enter the second card into the following challenges:
Quirky Crafts where they want numbers,
Just Some Lines where they want two different colouring media (Promarkers, but the scarf was coloured digitally)
Tuesday Taggers where anything goes.
Posted by Josephine at 21:02

Cute card. Thanks for playing with us at TIOT.
Hugz, Z

These are wonderful 'male' cards, Josephine. I love them! xx

oh love your milestone number and a perfect image and gorgeous card, thank you for sharing it with us at the Secret Crafter Saturday Challenge
Hugs Kate xx

Two gorgeous cards Josephine, love the fun one from Pollycraft.. got that image too :D

Great cards! Thanks for playing at The Crafty Pad this week in our Autumn Colours Challenge!
Good Luck
Hugs
Dawn xx

great fresh cards, that you for joining us at TIOT.EE

Two fab creations Josephine. Love the shed card. So perfect for so many men. My Dad spent his life in his!

These are both wonderful. Thank you so much for joining in with our challenge at Quirky Crafts Challenge Blog

This looks absolutely magnificent. Love the vibrant colour choice.Thanks for playing at Just Some Lines and good luck. Hope to see you back saturday for a new challenge. Bettina xx

Both card are really nice, nice image too.Thank you so much for joining with us at My Heart Pieces.