Digital images are great, aren't they? So versatile, and pretty much anything you can do with a stamped image, you can do with a digi. So, this week on Crafty Cardmakers we're challenging you to spotlight your digital manipulation skills - use a digi, but do more than just print and colour! Think of all the things you can do with digis - resize, mirror, combining more than one image, adding text ... and so much more besides.

We're sponsored on this Spotlight challenge by Stitchy Bear Stamps, and Ei whose stamps are available here. The DT  were allowed to choose from an extensive selection of images. Now, I'm a big fan of Stitchy's silhouettes, so I chose Rainbow Magic - a set of six silhouette fairies with a touch of magic! 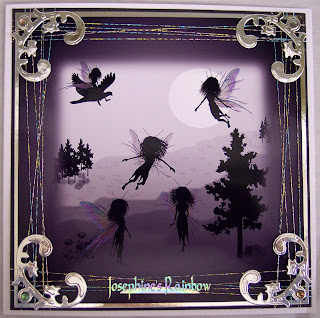 And to show that touch of magic a bit more clearly ... 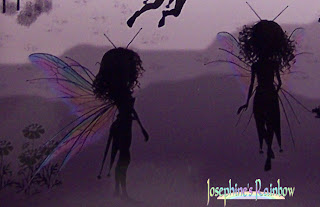 Isn't that touch of colour in the wings just gorgeous?

So, in Photoshop Elements, I first put together a background. I masked areas and filled them with gradients of various shades of grey. I did the same for the moon - a circular mask and a gradient from pale grey to white. Then, I used the cookie-cutter tool and some of the supplied shapes to add some trees, flowers and a bird.

At this point, I added the fairies - they're supplied as both JPGs and PNGs, and the latter retain some transparency, so you can see through the wings to what's behind. I thought I've have one lazy fairy - she's hitched a ride on the poor bird! I think it's pretty clear they're gathering for some purpose or other, but I wouldn't like to speculate on why.

I finished the image with some brush strokes to give some shadow under the tree, and to give the ground a bit of texture, and added a gradient frame, then printed it onto glossy photo paper. Then, I matted it onto silver mirriboard and black, and added some Krenik Blending Filament around the edges to give a rainbow-toned border. I added that to a white card blank, and finished it off with some die cuts and sticky gems.

I had real fun with this - I even surprised myself by using five out of the six fairies. (Nothing wrong with the remaining one - the image just felt 'finished' without her.)

Hope you're able to join us in the Spotlight this time!

I'd like to enter this card for the following challenges:

Flutter By Wednesdays whose challenge this week is open except for needing a butterfly, angel or fairy on it.
Creative Card Crew who are looking for Fairy Tales.
Meljen's Designs (whose theme is 'Anything Goes')
The Three Muses who want 'Things with Wings', and
Karber Monthly whose theme is 'Fantasy'.
Posted by Josephine at 12:00

Oh wow Josephine thats stunning, what work youve put into it looks so fabulous and you are right those wings are gorgeous. with love and hugs Shirleyxxxxx

Josephine, that is absolutley beautiful...OMG I can't believe I crashed my computer and can't save this right now... ;(...but I will be sure to gather it up soon as I get back to full power...that one is DEFINATELY going into the store, with your permission of course :)..totally awesome babe, thank you so so much :)...

Stunning, magical and mystical! I love everything about it. Gosh you girlz and your crazy computer stuffs....I could never do anything like this! So fabulous your colors and layout! just the right amout of fairies with touch of color! PERFECT!

Can I come to yours for lessons pretty please??? This is stunning. xx

Absolutely stunning. Thanks for joining us at Meljen's Designs this week.

Stunning card! Thank you for playing along with my flutter by challenge!

This is beautiful! Love the wings!

Wow Josephine - love how you have put this beautiful digital creation together, it works so well.
Hope you are having a good day.
Luv B xxxx

Woo, this is lovely. I'm not that clever with manipulating stuff and I am very impressed with what you have done. Those wings are just beautiful.