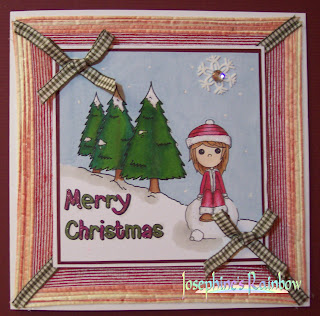 I've used the Polycraft image (Cherry Kisses Snowball) several times this year, but always as a 'stand alone' image. This time, I combined it with another Polycraft freebie - (trees background) and added a Merry Christmas in an outline font. I printed it on Ryman Ink Jet card and coloured the image with Promarkers.

Because of the combination of images, the result was fairly big, so instead of using a backing paper, I decided to use some ribbon to frame the image. I mitred some red/cream ribbon I've had for a few years, and added some detail with some green gingham, and finished with a couple of bows and a stick on snowflake with a sticky gem.

I'd like to enter this card into the following challenges: Digital Tuesday where the requirement is to use a digi image (I used two), ribbon, buttons and bling. (Two out of three.)
Anything Goes where Christmas has come early,
Fab'n'Funky where they want a digital image,
Create4Fun who also want a digital image, and
Craftilicious where Anything Goes.
Posted by Josephine at 17:57

Awww this is so sweet, I love Pollycraft stamps too.. just printed one off today, he he and waiting for tomorrow's challenge to start it out :)

What a fab card. I love how you have used the ribbon to make a frame around the card, great idea. Thanks for joining us at AG. L x

Oh wowzer Josephine this looks brilliant this looks like a framed picture and I love it, that image and scene look fabulous this is great.
hugs
Lorraine x

fab card, thanks for joining us at FnF

very cute winter card!! I love it!
Thanks for playing the Digital Tuesday Challenge!

Wow! I love how you combined the images. That looks great! THanks so much for playing the DTC this week!

Hi Josephine, love your card its gorgeous, but she wants to get of that snowball or shes likely to be suffering with piles, with love and hugs Shirleyxxxx

Love the scene you have created. Thanks for joining us at Craftalicious. Hugs Tracy x