The challenge for this fortnight has been set by my team mate Christine, and she's asked for projects which are red, white, and blue.

My card was almost a week in the making. I tried a few things, discarded some, kept others. I didn't have any specific ideas beyond using the stamps and the colours. 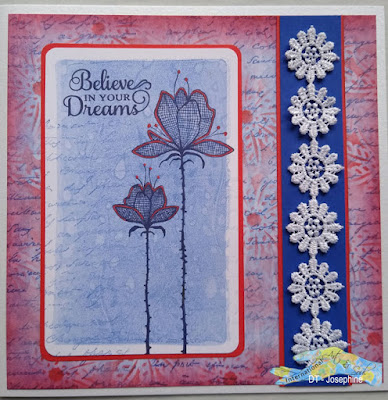 I started with the image piece. I used a gell press to apply Distress Ink to some card, then did a second layer with the same colour, this time applying a stencil first. The effect is subtle, but it did give some teture. Then I stamped the Lavinia images, and the sentiment which came from a Creative Expressions set. I added some further texture with a text stamp, and added some detail to the flower with a Posca pen in red. I trimmed the result, rounded the corners and matted it on red card and then stopped to think again.

I had intended to make a six by six card, but that was too small, so I switched to 7 by 7. The background started similarly with a gel imprint with the same Distress Ink. Although it's not obvious, I added some red using Versfine Clair ink and a lacy floral stencil. I then used the same text stamp to the background, and edged the piece with Distress ink. I tried several things for the side panel, but finally settled on some red and blue card with some floral lace. And that's it. I hope you can join us this time,

It may have taken you awhile but it sure was worth it! I love the lace edge and the whole card is beautiful.

Hard work pays off. It’s beautiful. Well done. I can’t wait to see what you make next. Have a special day just like you.
www.rsrue.blogspot.com