The challenge for this fortnight is to create your own background. 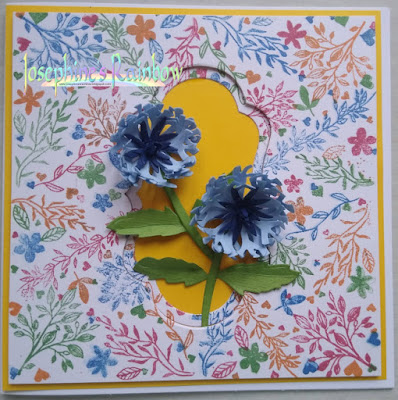 This card uses Memento ink in four shades to create the background.  I cut a window in the card using a Sizzix die which actually double cuts, so I had a separate 'frame' die cut. I used foam mounts to attach the background, then added the frame tight to the gold coloured background. The flowers were created with a die set from Elizabeth Craft/Susan's Garden Notes. 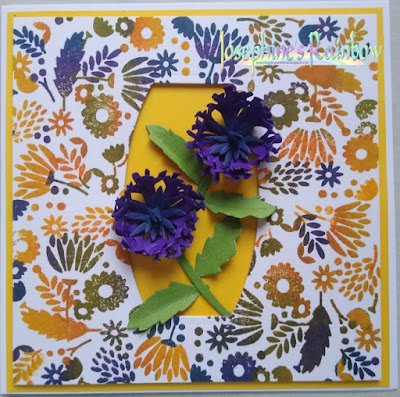 The process here is the same, but instead of four different ink pads, I used a single, Kaleidoscope pad. Again, I cut an aperture in the floral background, and again, the flowers were made using dies from the Susan's Garden Notes collection.

I have to say I'm a little disappointed with the rotating dies. Having watched Sara demonstrate them, they seemed fairly foolproof, and I assumed they'd work well with my Tim Holtz stamping platform. To be honest, they didn't. It simply wasn't possible to arrange things well enough to get the desired result - even placing the stamp as close to the centre of the card didn't seem too work. Of course, using that platform, I left the stamp in place and rotated the card (which I'd placed at the corner to be sure of repeatability.)

Anyway, I managed to find the Crafter's Companion stamp platform and magnetic base at a good price (ie, not much more than the platform alone) and decided to get it, at least partly because having a non-hinged platform seemed to have some advantages. Unfortunately, the result wasn't any better, initially. Because with this system, you leave the card alone and turn the stamp, it's important to place the stamp in the dead centre of the platform. And there lies the problem. Even getting it as close to the centre as eyeballing it will allow, there's still a bit of a mis-match between rotations. That may be because, unlike the Tim Holtz platform, there's quite a lot of wriggle with the Crafter's Companion  platform. It's definitely possible, even with the platform feet in the recesses in the magnetic sheet, to get up to a couple of millimetre's wiggle when you stamp. The result (providing you line up the grid lines on the platform and base as well as you can) is ok  and I'll definitely use the stamps, but I don't think I'll be using this platform as much as the Tim Holtz.

You have created two wonderful colourful backgrounds, very nicely done! I love them both! (Interesting post re the platforms, good to know).
Have a great day!
hugs
Glenda

It looks very William or May Morris, Josephine! Beautiful backgrounds - of course....