Hello! This time, at Crafty Cardmakers, our theme is Floral Profusion! So, anything you like so long as there are lots of flowers.

I had to make a card for a colleague who was loves blue and was having a birthday and leaving our school within a few days. This is what I came up with. 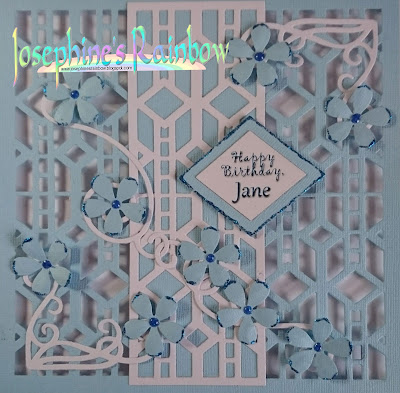 For the background, I cut a Sue Wilson Striplet die twice from some pale blue card, and then cut used the same die to cut from white card, adding that as a central panel. The swirly shapes were cut using some Sizzix dies I've had for ages - they're Sizzlets, and I make a point of not buying them because I really don't like the rubber-backed type dies as I don't find they're very forgiving if you don't cut them first pass. Having said that, I've never had a problem with this set, but then they're quite small. For the flowers, I used a Crafter's companion die, and I cut the computer-generated sentiment using a Spellbinder's die. To finish, I added a touch of glitter glue.

The striplet dies are so versatile to make backgrounds, aren't they? I don't use mine often enough....

Love this Josephine, all the die cuts are fabulous, a very pretty card, have a great week xx