This time, at Crafty Cardmakers, we're asking you to make a card that's not a square or rectangle. Other than that, it's up to you!

For this, I decided to make a circular easel card for a friend whose birthday is coming up. 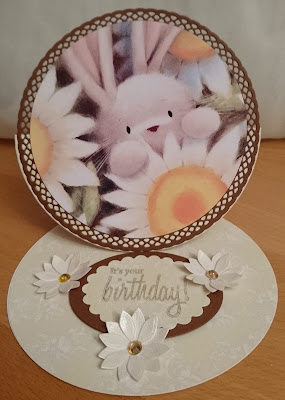 My friend loves rabbits, so the Bebunni Floral CDRom seemed like the ideal place to start. The image and paper are both from that, and the sentiment is also from Crafter's Companion, stamped in gold ink. I've used a variety of dies for the card itself, the image, sentiment and matting, and to create the flowers. It's not a particularly complicated card - I've found that the people who get my cards seem to prefer the simpler designs. In fact, those who specifically ask for cards often want something very personal (including names, dates and often photos) but which are, from a crafting point of view, very simple - so much so, I don't tend to blog them. (Well, that's also because they've got photos and personal information, but I tend to think that makes them uninteresting unless you know the person in question.)

Fabulous card hun, I love it. Sorry I haven't been by lately. Hugs Kimx xx

Aw, what a cute image! I too find people really like the personal touches (I get weird requests sometimes - the latest was for a half painted shed card!)