Since I bought myself a set of Spectrum Noir pencils, I've spent a lot of time practising with them without necessarily intending to use the results. And then my daughter returned from university for the summer to tell me she's been invited to a 'baby shower' for the older sister of a friend, and could she have a card. Now, neither she nor I get the idea of 'baby shower'. It's obviously an import, and it flies in the face of tradition in the UK where it's seen as unlucky to get very much for a baby before he/she is born. I still remember the horror on my mum's face when we told her our eldest's pram would be arriving before his due date!

However, she was going to choose an image for me to work with, and then she got busy and last night realised that she needed it first thing this morning. So, I found one of my practise pieces, and went with that. 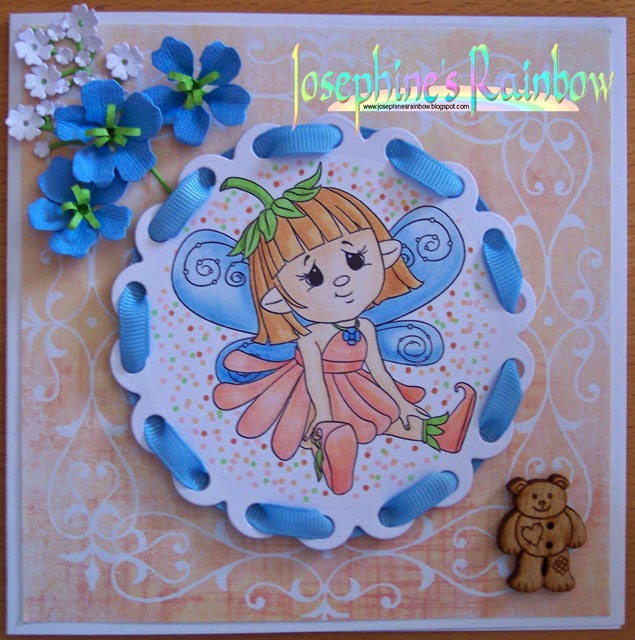 Fortunately, the mother-to-be knows she's expecting a girl and has a horror of 'baby pink', so my peach and blue colour scheme didn't seem too unreasonable.

This was a trial of flat colouring with Promarkers and then shading with the pencils, and I do think that's the best option for me. It allows definite but fairly subtle shading without excessive bleeding or mottling of the card. The paper is one I've had for many years - really pretty papers that for some reason I find very difficult to use. I suspect it's because they've got limited colour ranges - peach/white or pink/white or cream/white, and I do like to combine colours!

I cut the image using a Spellbinders die and embellished with a wooden teddy I've had pretty much forever, some ribbon, and some flowers I made using dies from Sizzix and Cheery Lynn. The image is from BB Cakes and it's called Flora Fae. It's available from the Stitchy Bear Outlet (link in my sidebar).

Adorable! Great little wooden bear accent too. Thanks so much for sharing with us at A Creative need!
smiles,Deena

lovely card! also the tiny flowers.
beautiful made
thank you for joining at lacy sunshine challenge.

This is a fabulous card. I like how you've woven the ribbon around the image.
Thanks for playing along in our fairy challenge at Creative Card Crew!
~ Crystal (DT)

Just gorgeous!! LOVE that ribbon through the die! Thanks so much for playing along at ATSM xx

So lovely! Thanks for joining at Lacy Sunshine: Anything Goes
Hugs
Dewi

lovely card-really cute! Thank you for joining us in our fairy challenge at creative card crew. Irene DT xx

Thanks so much for taking the time to share with us this week at Addicted to Stamps and More, hope to see you back soon!!!

Gorgeous card - I love your color choices.
Thanks for sharing it with us at Crafty girls xx