It's half term this week, and so I'm trying to get a little bit ahead on all those March birthdays that seem to creep up when I'm still short of pre-made cards after the rush of Christmas. I've got a few coming up which have been made as part of DT commitments, but it's lovely to be able to make something just for someone specific without starting from constraints. 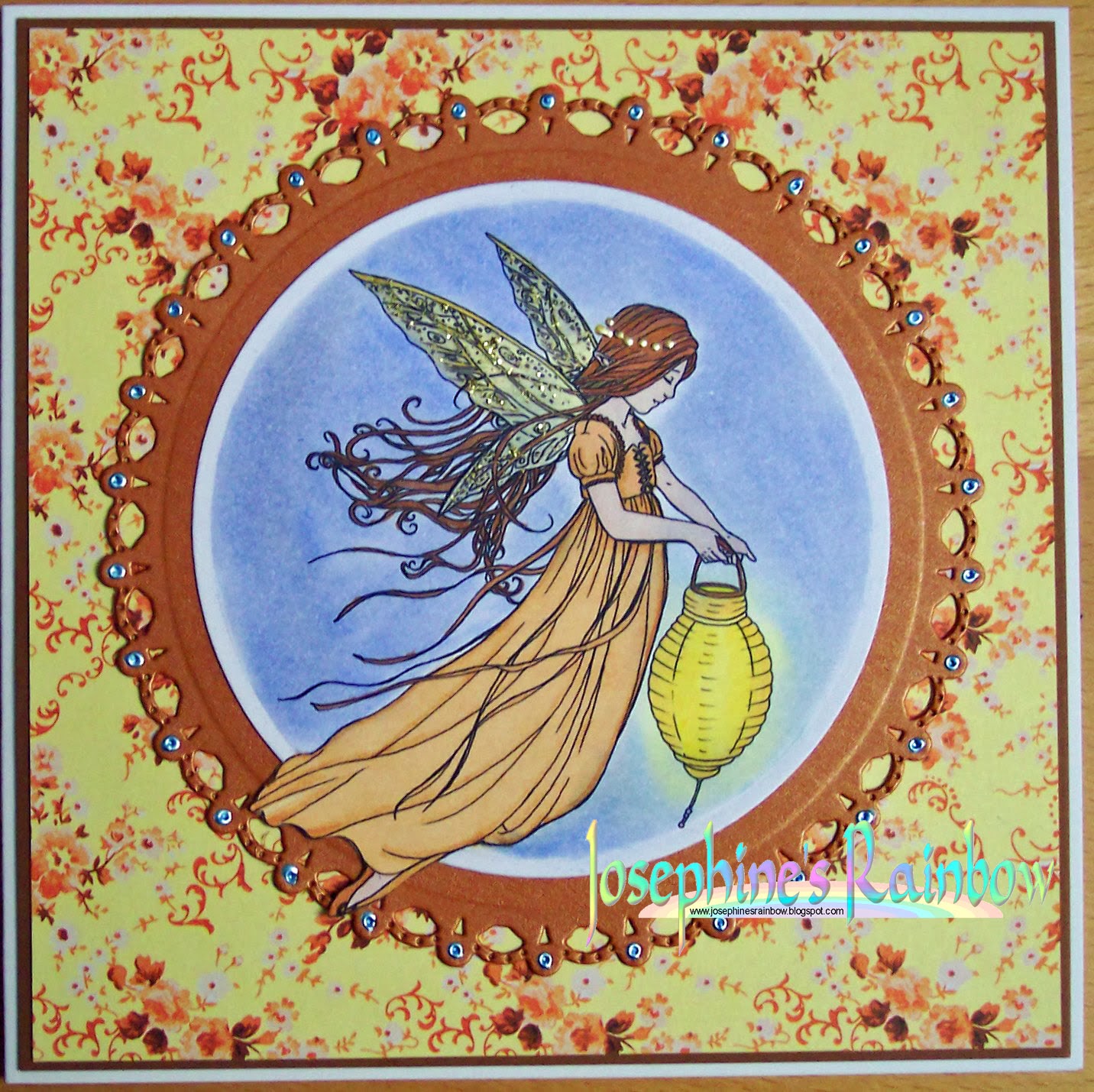 The lady I made this one for is someone I worked closely with for a few years, although we're now working in different rooms. She loves very feminine cards, and I have a suspicion that she was responsible for a Secret Santa gift I had a few years ago. It included a pad of paper from Papermania that I loved so much that I went out and bought a repeat when I saw it! The paper here is from that pad. Anyway, I know she likes yellow/gold/orange mixes. The image is a digi from Crafts and Me and the original artwork is from my favourite Crafts and Me artist - Sara Burrier. I cut the image using a Spellbinders die, leaving the hem of her dress and foot to overlap the edge, before colouring the image with Promarkers. Then, I added some glitter glue to her wings and some liquid pearls to her head band. The background uses Pan Pastels. The matting is also from Spellbinders - one of their Grand Nestibilities. I considered adding some flowers, but there's so little of that gorgeous paper still visible I couldn't bring myself to do so. Instead, I added some more liquid pearls, this time in blue, around the die cut.

very pretty love the colors you used, thanks for joining us at CMC Challenge group.
Hugs

Gorgeous card!! That is beautiful DP and a sweet image!! I love the fancy die frame!
Thanks for sharing with us at DPDC43!!

Beautiful card! Gorgeous colors! Thanks for joining us at Love to Scrap! Challenge Blog
Tina dt

Well this is gorgeous. I love it!

Thank you for playing with us at Brown Sugar this week.
Nick

Beautiful! Your colors and coloring are so pretty! I'm sure your friend will treasure this card! Thank you for joining us for the Doodle Pantry Digital Challenge!

Beautiful card!Thanks for joining our Girly Girl challenge at Craft Your Passion! HUgsxx

She is beautiful - great job! Thanks for joining the Doodle Pantry Digital Challenge this month!
Lyn

Thank you so much for joining my Craftyhazelnut's Patterned Paper Challenge for February with your lovely card - hope to see you again soon. x

This card is really pretty. I love the colors you used...it has an overall calming aura which is nice. Thank you for joining us at Paper Nest Dolls. Heidi - PND DT

This is beautiful with such fabulous colouring and layout! Thanks for sharing at The Paper Nest Dolls this time.

Beautiful and love the colors.
Thanks for joining us at Digi Galore.
Cindye DT