One Stitch at a Time Challenge 103

This week at One Stitch at a Time, our theme is Reuse or Recycle! Our sponsor this week is Creative Craft World.

This week, I worked with an image from Beary Dust called Berry. 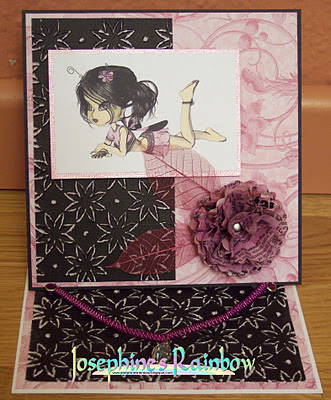 I coloured the image with Promarkers and mounted it onto some card from the Papermania Capsule collection. The backing paper came from the same collection. The black card is Coredinations Black Magic which I embossed using a Sizzix folder in my Wizard, before sanding the embossed areas.

As for the recycling/reusing, here it comes! The flower was made using newspaper. I did shade it with Promarkers to soften the effect a little. I cut some scallopped circles in my Wizard with a nestibility die and joined the layers with a brad before scrunching and then unfolding each layer. I added two skeleton leaves to complete the effect.

Then, there's a bit of re-use going on. I've had some of those wire spring 'beads' for years, and I strung them onto a bit of jewellery wire, adding a clear 'jewel' I found at the bottom of a jewellery box. I then curled the ends of the wire around some round-nosed tweezers, and attached the result to some more of the Black Magic card with a couple of jewelled brads.

Hoep you can join us this week!

I love your flower--it's got a vintage look.

This is adorable! LOVE that image and WOW ... beautiful flower! Great job! Thanks so much for joining us at The Sisterhood ‘USING DIGIS’ challenge and please come back again soon!
Darlene
one of the 'Sistahs'
DAR’S CRAFTY CREATIONS

Love your card, and your flower turned out beautiful. I am going to give that a try!

Hope your having a great weekend.
xoxo Marjo

Pretty easel card, and your handmade flower is beautiful! Thanks for joining us at Flutter By Wednesday!

I love these colours together Josephine and the flower and image are just gorgeous! Thanks for sharing with us at LCI this fortnight, good luck! Pami x

Fabulous card, love the image. Thanks for joining us at Do You Stack Up.

she is sooo cool

Lovely card, just love the flower.
Thanks for playing along at Stamp n Doddle Blog
Wendy

Very nice - thank you for joining us at Stamp N Doodle blog.

Josephine youre newspaper flower is brilliant and perfect for your gorgeous card !!

A beautiful vintage flower! I love the colours! Thanks for joining us this week at The Crazy Challenge!
Hugs,
Valentina

this is totally gorgeous and perfect for embossing our challenge at the Emerald Faerie Garden, thank you for joining us
Hugs Kate xx
ps I have candy if you are interested :)

Great card, the image is very cute! Thanks for taking part in Sparkles Monthly 'Things With Wings' challenge xx

Very cool image! The newspaper flower is awesome! Thanks for joining us at DYSU.

Fab card, love the black with the pink. Thanks for joining us at LCI this fortnight...