One Stitch at a Time Challenge 100

This week at One Stitch at a Time, we've got two sponsors for our 'anything goes' challenge.

who are offering the winner three Promarkers, and 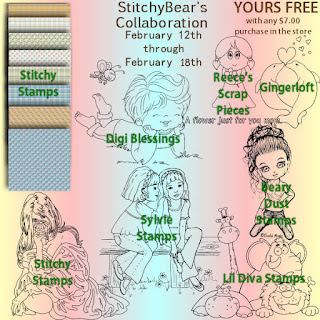 And don't forget, if you're not lucky enough to win it, you can get all those images and papers free when you spend $7 at the Stitchy Bear shop.

My image this week is from Lil Diva, and it's called Fun in the Jungle and it's available here.

Now, my DT team mate, Hazel, chose this image for both of us, and generally, I think we've got pretty similar taste in images. But, I had some concerns about using this one, as it looked most suitable for a child's card, until I gave it some thought, and so I added a sentiment. 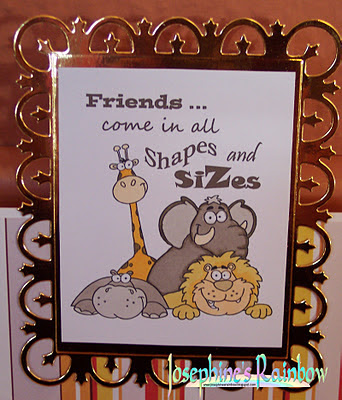 And suddenly, I had a much more general image - perfect for all sorts of cards. That's one of the things I love about digital stamps - it's so easy to add something like that. Use any fonts and sizes you want, and never be constrained by the bits of rubber you happen to own. So, I was all set to make a fairly general card with the image, but then my daughter saw it, and she told me that my younger son (who's twenty later this month) would love it. I was confused for a moment, but then she reminded me that he and she get a bit silly whenever he's home from university. When they were much younger, they used to video various soft toys in amazing adventures, and as a result, all the toys had names. While it's been many years since they videoed anything, they still refer to the various toys, and they all live in my daughter's bedroom. So, I asked her to go and get a few of the favourites, and took a photo. A few moments in Photoshop Elements and I had a second sentiment added. 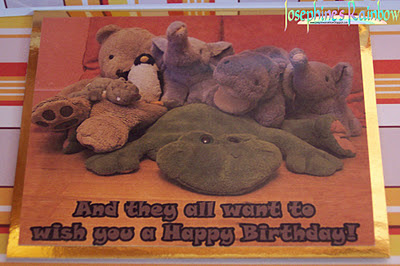 And so the card became an easel-style card. 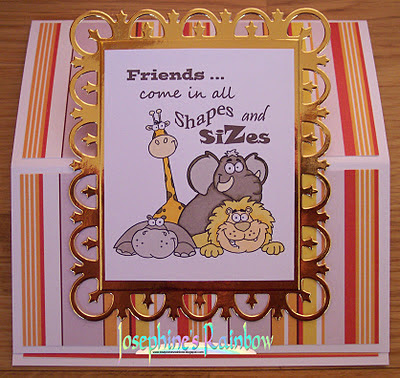 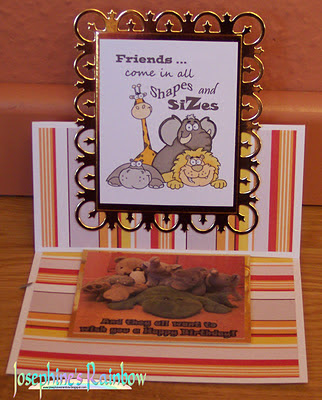 open!
The paper is from Papermania's Capsule collection, and the die is from Spellbinders.
I hope you can join us this week!

I'm glad you found a use for this image! Your card is great and I bet your son loves it. Hazel x

Absolutely gorgeous Josephine. What a perfect image for your card too !!

What an awesome memory, what a clever idea too! Your card is gorgeous by the way, I love that die..

very cute! Thanks for playing @ CTO!

Oh I love this Josephine !! what a great design. Lots of cute critters here!! and you've coloured the image beautifully. I love the delish paper and the gorgeous gold frame. Wonderful sentiments - it's a really sweet card!
Thanks for joining us at MAWTT for my Cute Critters Challenge and Good Luck!
Hugs Sue xx

Josephine this is brilliant! And what a lovely read! Bet your son will be thrilled! Judy x

Super card Josephine, love the gold frame and fun image. Thanks for joining in with Sue's challenge at MAWTT this week, hope to see you again soon. Pami x

Wow what a great card. Thanks so much for sharing with us at Alphabet Challenge Blog this week.

Super job, just fabulous!!
Thanks for joining us at CTO!

What a great gold border, love your adorable image! Thanks for joining us @ CTO this week for our "Anything Goes Birthday" Challenge :)

I saw this image on Hazels blog and I love it, its so cute and fun! Love your shiney frame
Thanks for joining us at MAWTT for Sue's 'Cute Critters' and good luck with the challenge
Hugs Laurie x

how wonderful and cute!

Super cute card. Thanks for joining us this week at Sassy Studio Designs for Dare To Be Sassy Thursday. Please join us again next week.