One Stitch at a Time Challenge 89

This week at One Stitch at a Time, we've got the best challenge of all - Anything Goes!


This week, I chose a gorgeous image and paper set from Reece's Scrap Pieces. It's called In the Meadow we can Build a Snowman and it's available at the Stitchy Bear shop where there's a great deal coming up. 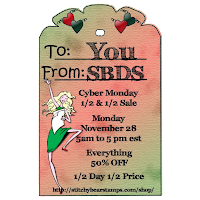 The set consists of a standard digi-stamp, a pre-coloured image and five toning papers. 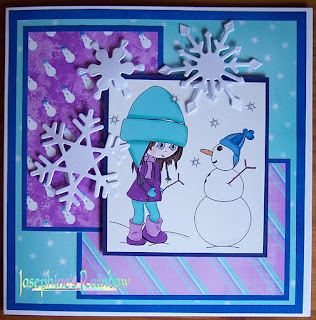 Here, I've used the pre-coloured image and four of the five supplied papers. I matted three of the papers with a fourth one (a dark blue) in Photoshop Elements before printing them onto Ryman Matte Ink Jet paper. I printed the image onto Glossy photo paper and added some Glamour Dust before matting onto blue card. The snowflakes were die cut using a Marianne Creatables set in my Wizard, using white card that had been sprayed with Crafter's Companion Spray and Sparkle in irridescent.


I also coloured the image to match some paper I had, and came up with this: 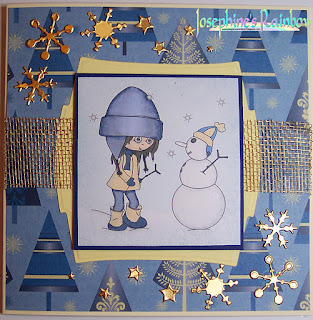 I shaded the sky area of the image a pale blue in Photoshop Elements before printing, but you can't see that in the photo. (I can either use artificial light which washes out pale colours or have a really dark photo just now!) The paper and gold mesh are from my stash, and the snowflakes and stars were cut from gold card using a Cuttlebug die.
I hope you can join us this week.

Josephine i adore both of your cards.. I love how you made 2 including the pre coloured image and papers... Thankyou for sharing how great this pack is.. It was a hard choice deciding which to show on the challenge blog.

Always with a Sentiment said...

Two gorgeous cards,love them both.Thanks for sharing this with us at Craft your Passion this week.xxx

Wow Josephine, both your cards look stunning but I do think I prefer the second colour combo. hugs Shirleyx

Hi Josephine, this second card uses all my favourite colours it's just lovely. Thanks for taking part in the CRAFT challenge this week. Good Luck hugs Sheryl xx

How different the cards can look, depending on whether you use the coloured version or not. Both look great. Hazel x

Lovely cards, Josephine. Sweet image and great color combos. Thanks for joining us at Craft Your Passion.
Hugz,
Cathy Lee

Aww, so cute. Great image. Both of the cards are so sweet. Great wintery, chilly cards. Thanks for joining us this week at fab 'n funky. Good Luck and we hope you will join us Wednesday for our BIRTHDAY BASH!!

Two great cards I think I like your own coloured version best I really like to gold with the blue.
Carol Ann xx

Aww this is SO sweet! The image is adorable! Love the papers and layout and those snowflakes are gorgeous! Really sweet card!
Thanks for joining us at MAWTT and good luck in the Challenge!
Hugs Sue xx

Love both of your cards, the designs are fantabulous!

Both creations are fabulous! Awesome coloring! Thanks so much for joining our "Anything Goes" challenge at Shelly's Images! Please come back and join us again real soon!!

Love the image and the colours you have used for this card, fab card. Hugs Julie x

Super cute snowman card! Thanks for playing the Dress Down Rebel Challenge at RRD!

Great cards, love the snowflakes and the cute little image! Thanks for sharing with us at MAWTT this week, good luck! Pami x

wow! wonderful creations! so much fun to look at1

Great cards! Love your color choices. Thanks so much for joining our "anything goes" challenge this week at Shelly's Images.

I love the colour combinations on both of these, stunning! Thanks for joining us at Phindys Place this week...

Two fabulous cards its great to see how different they can be using the same image!

Great card! Thanks for joining us at Cardmadfairy's Digi Days Challenge.

Nice work, love the colours - thanks for joining the CC Monthly Challenge.