One Stitch at a Time Challenge 79

It's been a while since I've done a DT card for OSAAT, but I've decided it's time to get back to normal. So, this is my card for this week's challenge which is that easiest of options - anything goes!

Our sponsors this week are The Stamping Boutique, and there's a fabulous prize to be won, so what're you waiting for?

My image this week is from Stitchy Stamps and it's called Night Angel. I've made a Christmas card, but the image isn't limited to Christmas - I think it could be used for a lot of other reasons. 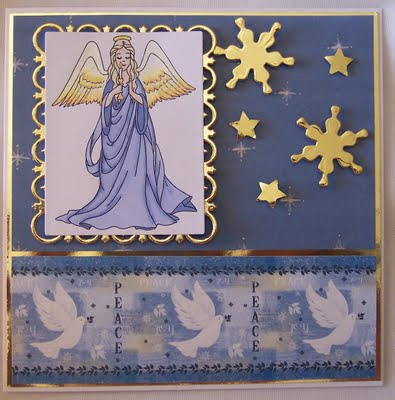 The image was coloured with Promarkers and Stardust pens for the wings and details, then mounted onto mirricard which I cut with what is probably my favourite nestibility - the Fleur de Lis Rectangle. The paper is from Personal Expressions, and I finished it with some die cut and punched stars.

The image is lovely. A beautiful gentle card. Hazel x

A gorgeous card Josephine !! Glad that you are back playing with us :O)

Oh wow--what a beautiful angel card! I love the gold and blue--very elegant! Wonderful job. Thanks for playing along with us this week at Speedy the Cat's Friends challenge.

Lovely. Thanks for joining us over at Crafty Boots. Zo x

Fantastic card, the blue and gold go so well together and the image is lovely too, beautiful rectangle die you have used. Julie x

How beautiful your angel is. Love the imagery you used with the snowflakes and doves. Simply fantastic. Thank you so much for playing along with Speedy the Cat's Challenge this week. It is a joy to visit and see what you made for us. Good luck in the stamp drawing. Looking forward to seeing you play again with us next week.

Love that gold on your card. Looks so elegant.
Hugs Nat

Oh this is so beautiful!! Thanks for playing along with us at Speedy the Cat's Friends challenge this week!

I really love your papers... The gold trim is beautiful! Thanks for joining the Creative Card Crew anything goes challenge!

Stunning! Thanks for playing along with the first crafty boots challenge! Amyxx

Beautiful and so creative with the gold accents! Thank you for playing along with my flutter by challenge!

Gorgeous card. I love the gold punches. Hey Chris can you please hold onto that check I gave you for the Stampin up order until next Friday if you have not cashed it yet?

oh hun this is one gorgeous card just love the gold accents on this hun,love it hugs cherylxxx

Thank you for playing along with us at Di's Digis in our very first challenge!

Thank you for entering the first Crafty Boots challenge.