I haven't been around much lately. Although I've been at home, I'm anxiously awaiting various paperwork from banks so I can get my mums accounts submitted and things handed over to the solicitor. And the banks keep making mistakes and taking forever to correct them. It's looking like I might not get it all finished in time for going back to school in a couple of weeks which is crazy.


What with hanging around, waiting for the postman, and generally fretting about things, I haven't done a lot of cardmaking. I've taken leave from OSAAT because I'm just not reliable at the moment, and Crafty Cardmakers/Spotlight is taking a break because so many DT members just needed some time away for various reasons. Still, I make cards as a recreation, so the other day, while I was frustrated at yet another mistake in the figures I was sent, I decided to calm myself with a little watercolouring.

A while ago, I tried out my Aquamarkers and wasn't that impressed, but I stuck with them, and having found a better watercolour paper, I'm getting better results. (I've still got concerns about some colours specifically which seem to sink into the paper instantly and defy all attempts to move the colour at all.) And, when I'm feeling a bit down, what better than to think about fairies and fantasy creatures? 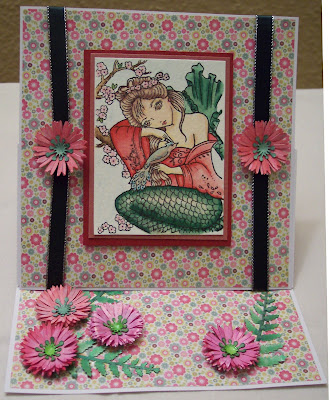 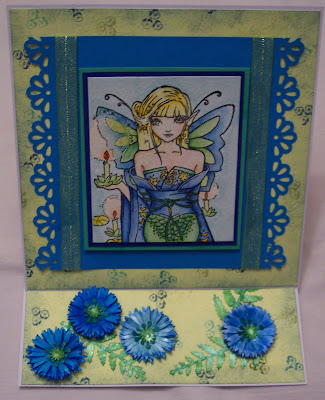 (Entered into the following challenges: Stamps +Fun where they want 'mythical creatures'
Fashionable Stamping where the theme is hand-made flowers,
Simply Stamping where the theme is 'punch it up'
Art Impressions where 'anything goes.)
Both Ching Chou Kuik images, of course. The top card uses some of those gorgeous MME papers from a magazine. In the case of the second, I coloured as I wanted to, and then found I didn't have any paper to match. so, I got out some yellow card, tapestry stamps and distress Inks. I've also used a Martha Stewart border punch on that one.
The flowers in both are made using a Martha Stewart cornflower punch and card coloured with Aquamarkers and Twinkling H2Os. 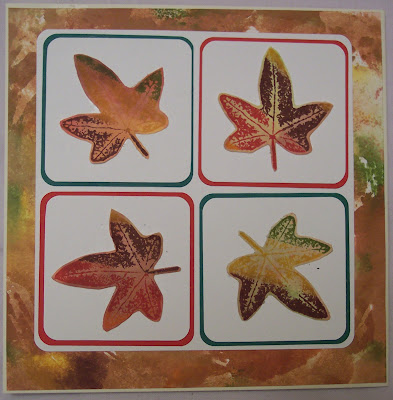 (Entered into the following challenges: Cards for Men where 'anything goes',
Here Come the Boys where the theme is brown and oranges,
Lollipop Crafts where the theme is 'make it masculine' )
This one is quite different. I love my Blossom Kaleidacolor ink pad - so much so that I've been wanting to get a few more. I finally ordered a couple - Autumn Leaves and Berry Blaze. I've got to say, I'm not as impressed with the colours on these. The thing I love about the blossom one is that the colours blend to give other colours which are very different to those in the pad while all the shades work beautifully together. With these two newer pads, the colours do work well together, but you only seem to get the basic five shades you started with. Still, Craft Stamper had a lovely leaf stamp recently, so I stamped it with the Autumn Leaves pad, using various combinations of the colours. The background uses the same pad, with the colours added to a non-stick sheet and 'smooshed' with some water. 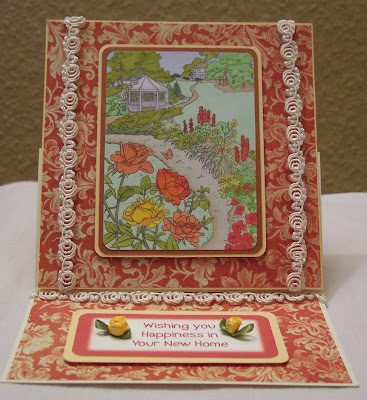 (Entered into the following challenges: Bunny Zoe where they want Easel cards,
Shabby Tearoom where the theme is summer with a photo inspiration,
Dream Valley where there is a colour theme,
One Stop where the theme is 'bold and bright'
Stampman where they want summer colours,
I Love Promarkers where they want easel cards.)
And finally, a card for my sister and her partner. They got the keys to a new house just a few days after Mum died. It needed quite a lot of work, so they didn't move in right away, and instead pulled the place apart. They're due to finally move in in a couple of weeks.
The image is a Dover Books sample I've had for a while. It's actually a colouring page, but meant to be much bigger. Shrinking it to card-sized made it a bit fiddly to colour, but I was happy with the result, using Promarkers. The paper is from Papermania, and the sentiment is computer generated. 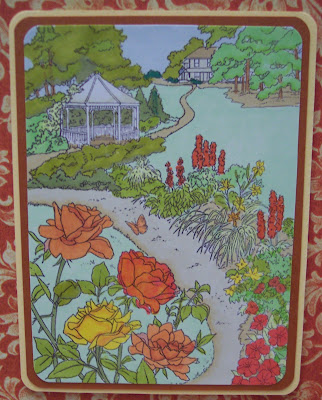 These are all amazing cards, do hope that the papers and all are sorted soon for you, so frustrating just waiting. hugs to you Heidi x

Wow! All of your cards are simple gorgeous!! Awesome work! I hope things get better for you and everything works themselves out! Thank you very much for joining us this week at The Shabby Tea Room!

Gorgeous cards Josephine, you've done a great job with the AquaMarkers too, thanks for joining us at I ♥ ProMarkers.
xx

Lovely Josephine, I just love these images too, thanks for joining us at DCD.
xx

WOW you have certainly got busy. These are all just fabulous. Sorry to hear about your Mum. Sending love. xx

PS Great card, love that bg paper. Thanks for joining us at Dream Valley. xx

Cute cards. Thanks for joining us at Dream Valley Challenges.

Great cards,
thanks for joining us at HCTB's Brown & Orange challenge.
Teresa xx

Such gorgeous cards and fab colouring. Thanks for joining us at I ♥ Promarkers.

Great cards. Thanks so much for joining us at Lollipop Crafts this week.

Wonderful selection of cards, fab images and lots of gorgeous papers, thank you for joining us at I♥Promarkers this week
Ruth x

All of your cards are lovely, but I like the Leaf design you have shared with us at Here Come The Boys! Woo & Jacky xx

Hi Josephine, it's great that you just created what you wanted, and then used your inks to match the background...You have done a wonderful job with the hand made flowers, they finish the card off beautifully!!! I read that you work at a special school...I am an integragtion aide at a school. Thanks for joining us at Fashionable Stamping Challenges
Dot x

Very pretty work - the best way for me, too, to free the thoughts. Thank you for sharing this with us at stamps&fun=CREATIVITY.

Love the leaves and your other cards are fab too! Thanks for joining our anything goes challenge at Cards for Men and good luck.
Hugs, Alison x

Hi Josephine, it always takes time to sort out estates after people pass away, I know we had the same problem with my hubbys dad a couple of years ago, you just have to be patient and hope it wont take to long.
I love all your cards they are gorgeous and your colouring on your mermaid fairy is stunning, Im sure your sister loved her new home one. hugs Shirleyxxxxx

wonderful card!!! thanks for joining us at StampInsanity this week!

Hi Josephine, wow nobody would ever think you weren't 100% happy with your aquamarkers. Jury is still out on them for me - perhaps like you I just need better paper! Thanks for sharing with us at Die Cut Dreams this time. Good luck.
hugs
Dawn xx

Love all your works! Thank you for playing with at Die Cut Dreams!

Such a pretty card. Thanks for joining us at SFC.

This is such a gorgeous card. I love the design and the image also. Thanks for joining us at Cards for Men. Mandy x

What a lovely Brown and Orange card...perfect for our challenge at Here Come The Boys!! Thanks for joining us, Donna

What a lovely group of cards you are sharing here! Thanks for joining us at SRU!

Fantastic projects and the most adorable handmade flowers.

Thanks for sharing these creation with us at Fashionable Stamping Challenges.

Hi Josephine sorry to hear the problems that you are having I hope it all works out ok in the end. As for your selection of cards they are all truly beautiful, those flowers are gorgeous so are the images. I have just a few Aqua-markers but haven't tried them yet.
Hugs
Lorraine x

Wow, these are all gorgeous! Thanks for playing along with our colour challenge at Dream Valley .. hope to see you again next time!

I love this image :) Your card is amazing. Thanks for joining SFC ......
Hugs
Judtíth