One Stitch at a Time, Challenge 62

This week at One Stitch at a Time, you get to choose the theme, because it's Anything Goes! That's right. Whatever you want to make, you'll be eligible for a prize, and that's even better when you realise that we're sponsored by Joanna Sheen.

This week, I was lucky enough to work with a gorgeous image from Blackberry Lane called Tulip Magnolia. I love magnolia flowers, but they're only around for a couple of weeks at most, and the rest of the year, those trees are unremarkable. 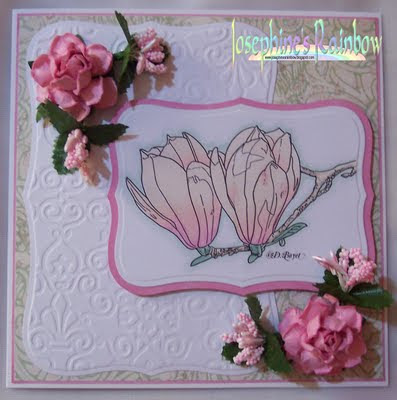 I coloured the image with Promarkers - mainly Almond, but with some Rose Pink, Baby Pink and Pale pink to give some shading, and a little Pastel Beige and Pastel Green for the rest. I shadowed the image with Tea Green to make it stand out from the white a little more, but it's quite a subtle effect.

I cut the image with one of my label nesties, and hand-cut a mat from the same die. I used a larger die from the same set to cut the embossed card, and embossed using a Spellbinders Impressability. These don't give as deep embossing as embossing folders, but they've got one huge plus. You can emboss them while they're still in the die, so you get that lovely clean border around your shape.

The paper is from Paper Cellar and the flowers from Wild Orchid Crafts and the local 99p Shop!

Oh Josephine I love that image, your colouring is gorgeous, a stunning card. with hugs Shirleyxxx

Gorgeous card Josephine!! So elegant and stylish!
Have a good sunday!
Marianne

Josephine, your card is beautiful!!!! I love it!

Such a beautiful card Josephine. The flowers that you have added really make the image stand out well..

gorgeous card - the image is so pretty - i love the soft colours you chose for it! Thanks for joining us at Crafty Creations Challenges this week! bx

Stunning card! Thanks for joining us at Delightful Challenges.

Gorgeous card, great colouring too.
Thanks for joining us this week on KD
Anne x

Wonderful card you made Josephine, perfect coloring I love it.

This is stunning, so elegant!

Thanks for joining us at My Mums Craft Shop for our Dies Challenge.

Oh what a beautiful card Josephine !!! Thanks for playing along with us at Karen's Doodles this week :)

This is a gorgeous card, Josephine. I love your fab flowers. Thanks for joining us at Papertake Weekly Challenge.
hugs Ula

Very pretty! I just love those flowers! Thanks for joining us at Penny's!

Nice job, thanks for playing at 4 Crafty Chicks!

Beautiful card and beautifully colored image. Love the soft look of this card. Thanks for joining in the Divas by Design Challenge.

Your card is so beautiful. Love that die cuts.
Hugs Nat

Very pretty card, Josephine! Totally reminds me of spring! Thanks for playing at 4 Crafty Chicks this weeek :)

Stunning card! Thanks for joining us at Delightful Challenges.

This is beautiful, the flower looks so real. You rocked this challenge. Hugs

Gorgeous! I love those nesties, they are my favourites! Elaine-xxx-