I don't know about you, but I struggle with male cards. And worse than the average male card, there are those for teenagers. So this was a bit of a challenge, but an image I've had for a while came to the rescue. 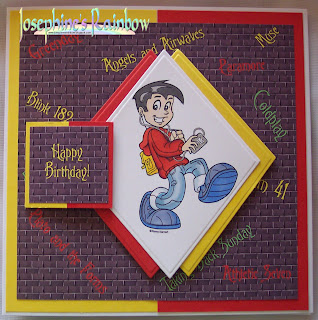 The image, of course, is from Kenny K. It was a freebie a while ago, so I snapped it up while it was available. I've coloured the image with Promarkers including my new Silver one, and cut it with my new diamond Nesties. I've been looking at those for a while, and was very pleased to see them and the scallopped hearts at a very good price at Olympia in March.

The background paper and sentiment were generated in Photoshop Elements using a brick pattern which came with my older software - Namo Web Canvas - although I've de-saturated it to give a more neutral background. Then, I've added some band names supplied by my sixteen-year-old daughter. Logically, since both my sons will no longer need teenage birthday cards, it'll probably end up going to one of her friends.

Our sponsor is  this week is "Stamping Scrapping"  owned by Kevin and Cindy Echtinaw.

Hope you can join us in the spotlight!

I'd like to enter this into the following challenges:
Papertake Weekly where it's 'Anything Goes'
My Grafico where 'anything goes'
Fussy and Fancy where they want something for a child. (To my mind, that's someone under 18! Sorry if you mean younger than that.)
Crafty Ann's Challenge where they want us to raise a smile. (Guaranteed since I've hidden some very local band names in the background graffiti!)
Aud Sentiments where they want something for a child. (To me, all under 18s are children. Sorry if you meant younger than this.)
Posted by Josephine at 12:00

Brilliant card, I love those diamond nesties (oooh do I have to go shopping?). xx

Great card Josephine, love the fab image and those papers are perfect for it.

Wow this is a cool card for a cool dude, your backing paper is wicked, well done for making it yourself :)

What a fun card.I love the brick background.
Thanks for joining us at Aud Sentiments.

Cool dude with amazing background paper. I have this image too and I have made one Dude card out of it. But I love your idea with diamond share. Thanks for joining us at MyGrafico.

This is fabulous Josephine and beautifully coloured. Thank you for sharing it with us at Crafty Ann's
Ann x

Great card Josephine!! That image has been colored perfectly!! So glad you could join us for our Aud Sentiments challenge.

Hi Josephine thats one fabulous card for a young man, and the colouring is spot on. with hugs Shirleyxxxxxxxxx

Such a fun card, Thanks for raising a smile at Crafty Ann's and good luck
Claire xx

I do love Kenny K images and the way you have used this one is fabulous.