Well, you could  have knocked me over with a feather last week, when I got an email from Wendy at Delightful Challenges to tell me I'd won a guest design spot on Digital Delights for my project for a recent OSAAT challenge - the table centre. (It also won a top three spot with Papercrafting Journey.) Many thanks to both DTs for the honour!

I had a tough choice picking out which images to use from the Digital Delights by Louby Loo shop. But in the end, my background won out, and I chose a set called  Scotland Ian. I could've chosen a Scottish girl too, but for some strange reason, I felt like doing a male-themed card, and since that mood doesn't strike me often, I didn't question it. 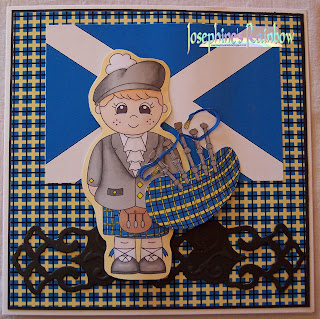 Isn't he cute? I coloured the figure and the bagpipes with Promarkers, but the flag I coloured in Photoshop Elements to use it as a backing. The background paper is one I made in PSE using the colours from the image - True Blue and Tulip Yellow with Black (from my Promarker chart.) In fact, the flag should've been a slightly different shade - apparently, the currently official colour for the Saltire is Pantone 300, but that's not too far from my hexadecimal equivalent to True Blue so I went with that. (I was interested to know that until fairly recently (2003) the only requirement was the heraldic 'azure' which covers pretty much any shade of blue you care to imagine.)

It's not obvious from the photo, but I've slightly layered the flag - putting some sticky pads in a line down at one point so that it's waving just a little bit. The figure and bagpipes have had a similar treatment - curved around a bit and attached with sticky pads. Being a male-themed card, I've kept it fairly simple otherwise - just adding a border cut with a Spellbinders borderability die. It should have been a different border - I was going to use a Fiskars border punch, but the handle shattered in my hand when I went to cut the second bit of it. Can't say I'm impressed with the Fiskars punches - that's the second of the two I've had that's gone. The first just got stuck and nothing I could do would release it. I just hope my newer border punches (Martha Stewart) prove more resilient.

Hi Josephine what a fabulous card love those plaid papers and the colouring is gorgeous. with hugs Shirleyxxxxx

what a fabulous card it's a pity Burns Night has already been but you could use it for St Andrews Day.

A gorgeous card Joesphine!! Thanks for being our Guest DT at Digital Delights this week:)

Great card, love the Scottish theme,thank you for joining us at Digi Doodle Shop's Best this week
Ruth x

What a delightful Scotsman! Love your coloring and that fabulous plaid! Thanks so much for joining us for this week's challenge and helping us to celebrate our first year anniversary celebration. Hope you will come back and join us again next week!
Hugs,
Marsha
SCH-DT

You lost me at Pantone Josephine. I thought that was something you washed your hair with!

Cute card though. Love your little scottish chap, clever mixture of digital and real colouring too. Just glad I don't have to hear those bagpipes. Used to be a Scot lived down the road from me and every Sunday morning he used to drive us to distraction playing the pipes. I grew to hate them, lol

oh that is fantastic, love the scottish flag and what a fabulous image!
many thanks for joining in the Cute Card Thursday challenge,
Happy Crafting, Debxx

you've made a fab card with him, thanks for joining us at Gingerloft this week.

How cute!! Love this little Scottish guy and of course the bagpipes! Wonderful choice of colours too!
Thanks so much for joining us at GingerLoft Challenges..Hope to see you again :)
huggs
Lynn xx

Thank you for joining us at The Crafty Pad @ http://thecraftypad.blogspot.com/ :)