It's been a busy few days. School started again on Wednesday, and then on Thursday, we had the Presentation of Certificates and Prizes for our younger son and daughter - two different events on the same day. At four, it was the turn of the GCSE pupils from last year, while at the evening event at seven, the A level certificates were presented.

So, I haven't done a lot of crafting, although, I did make one card. A friend and colleague announced her engagement on Wednesday, so I spent some time making a card for her. Unfortunately, I forgot to photograph it before I took it into school, so the only photo I have of it is from my phone so the quality is poor. 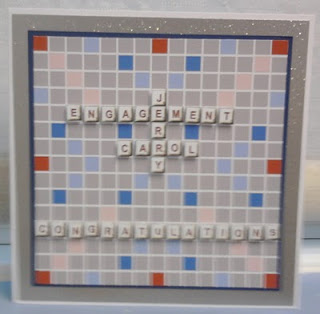 I did all the origination in Web Editor, then printed and assembled it. So you can see it a little better, here's a jpg of the board itself. 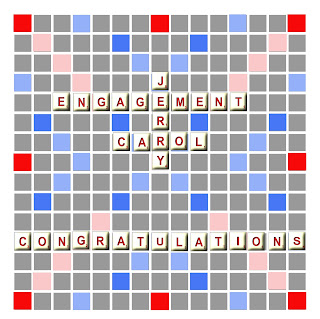 I probably could have done it in Photoshop Elements, but it's so much easier in Web Canvas because it's a vector package. I'd love to know if there's an up to date equivalent of it because when my laptop finally dies I doubt the software will be compatible with the newer operating systems. One of these days, I'll have to do some research, but I've been spoiled with this one because it was bundled with some other software which was very reasonably priced.

Other than some layering, I've kept the card fairly simple - they're both Scrabble players, so it seemed appropriate.

Wow what an original card, I love it. Thanks for joining in at Ellephantastic this month.

What a great card for Scrabble fans! Thanks for playing along at Ellephantastic this month and hope to see you next time. Jill

Thats awesome. I need to do something similar for a card order. Thank you for playing along with Ellephantastic this month. Good luck! Hugs Helen & Elle DT x x

Hi, WOW this is a super card. What a great idea. Thanks for taking part in Ellephantastic this month, Hazelxox

Wow what a clever idea, love your card its simple but stunning. With love and hugs Shirleyxxx

how fun is this! what a great idea! thanks for playing at AIF this week
-Tammy

Oooooh, love it, thanks for sharing with us at AiF. Hugs, Anne (AiF DT)

Clever and unique idea.Great card.Thanks for joining us at AiFactory :D
Lisa x

Fantastic idea and great card! Thanks for taking part in our challenge this month and look forward to seeing you again next month!
hugs
Michelle
Elle DT
x