The last day of September ... seems like it's been a long month. Our youngest started Sixth Form at the start of the month, our younger son headed off for his first year at university last weekend and our eldset goes back on Saturday for the start of his final year. It's going to be very quiet in the house without the boys.

So, I was a bit under the weather last week (one of the down sides of working with children) but I spent some time colouring some images, among them one from Pollycraft. And last night, I finally got around to making a card. 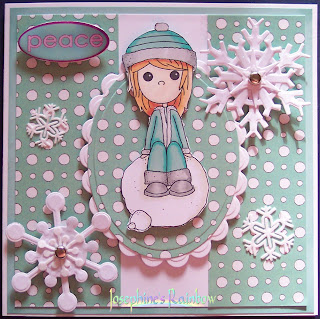 I coloured the image with Promarkers, then cut it out. The spotty paper is from Papermania, and I cut the mats with my nestibilities. The large snowflakes were cut with my Wizard and a Spellbinders snowflake die. You probably can't see it, but I sprayed those snowflake layers with Crafters Companion Spray and Shine (irridescent). It's the first time I've used it, and I was surprised to find it's a varnish type spray. I got it on my fingers and had to use nail polish remover to de-glitter myself afterwards. I like the idea of being able to give an overall sparkly layer, but I won't be using it indoors again because it set me coughing!

The smaller snowflakes and sentiment are from some sticker sets I've had for a couple of years - they were the 'free gift' for subscribing to a magazine. (A disappointment because I'd hoped for something else but that'd run out.)

Enough prattling! I'd like to enter this card into the following challenges:

Creative Inspirations where it's 'Christmas in September' and
Charisma Cardz where they're doing Christmas Crafting.
Posted by Josephine at 17:04

What a gorgeous clean card, love the papers, snowflakes and your colouring is great.
Thanks for joining us at Charisma this week.
Sally. x

Gorgeous Christmas card! Thanks for joining this week at Creative Inspirations Wednesday Challenge!

Fabulous Christmas design. Thanks for joining in with my challenge at Charisma this week. Good luck.
xx Vee

Hi Josephine what a fabulous card, love the colour scheme and that image looks gorgeous. With love and hugs Shirleyxxxx

This is a fab card. I love the 3D effect you have with the snowflakes.
Anice xx

Hi Josephine, what a gorgeous Christmas card. I love the cute image and colour scheme. Thanks for joining us at Charisma Cardz challenge this week. Hugs, Denise x