Well, to be honest, I made my first cards back in April, but I haven't photographed the others. Must get around to that some time.

Two cards - the same sketch and image - even the same colourscheme - but different backing papers other minor differences. 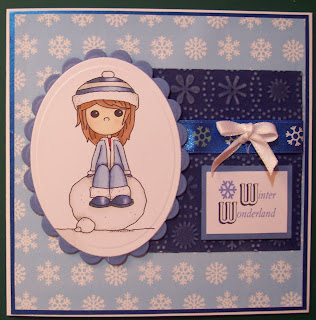 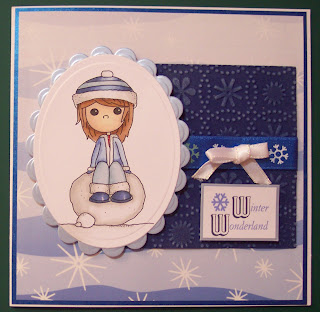 The image is from Polycraft - lovely, isn't it? It's been coloured with Promarkers, and the backing papers are from Papercraft Essentials. The embossed card was done in my Wizard with a Cuttlebug folder, and I used a white stamp pad on the raised image to make it stand out more. The sentiment is computer generated.
I'd like to enter them/the first one for the following challenges:
Crafty Catz which called for embossing,
Create 4 fun which had a sketch, and
the Pollycraft Monday Chalenge which wanted a sentiment from a song.
Posted by Josephine at 20:58

What beautiful cards Josephine, love the design and the colours you've used with the image!
Thanks so much for joining us at Pollycraft! xx

We match! I did two you did two. I never do two at a time, but I was inspired this time for some reason. I love what you have done with your two. I thought you made a mistake at first with the upload, then I started reading. I always looked at the pictures in the comics first when I was a little girl then I would read the story. I must be still a child at heart. LOL

Such a sweet imae and lovely colours! Hus rebekah x

Hi Josephine
A beautiful card,thankyou for joining us at CraftyCatz,
Hugs Dianne xx

Lovely card, thanks for joining us at Crafty Catz this week. Suzie x

fabulous card and gorgeous colour, thanks for joining us at pollycraft