The Stampman Challenge blog is having a blog hop, challenge and award event to mark the new year. As part of that, they want you to go through your projects of 2010 and choose a favourite. That's hard!

2010 has been in interesting year for me. Although I had a blog before last year, it's only in 2010 that I first got involved with a lot of things - entering a lot more challenges and joining a couple of design teams. I've also been lucky - winning a few 'top x' results and a number of prizes from blog hops and challenge blogs.

I've also tried a lot of different techniques with varying levels of success. So, what to choose? I enjoyed a couple of largely digital projects I've done here and here and done a fair bit of rubber stamping including this one, but if I'm honest, the technique of the year has to be colouring with Promarkers. I started late in 2009, but from basic beginnings, my technique has improved, although I've still got a lot to learn. So, if I'm choosing a favourite project, I'm going to choose my most recent one. 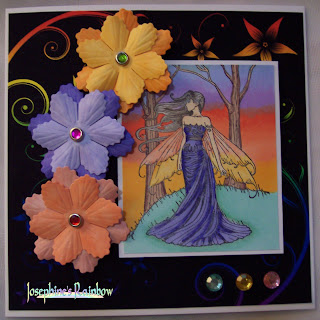 I've chosen it because I just had so much fun colouring that sky. It's a challenge I doubt I'd have attempted a year ago, but now, blending such different colours doesn't terrify me any more. So, I'm going to award myself the Stampman Award - it's down with my other awards, at the bottom of the blog posts.

So, what's your favourite project of 2010? I'm looking forward to seeing it.
Posted by Josephine at 14:53

Hi Josephine Happy New Year, and wow that colouring is stunning those flowers really make it pop of the card. Its a really gorgeous card. With love and hugs Shirleyxxx

Love your choice Josephine - you deserve that award well done. Thanks for joining in the Stamp Man challenge.
I wish you a happy, healthy and peaceful 2011 and hope it is all you wish for yourself.
Thankyou for being such a lovely blogging friend.
luv and hugs {brenda} xoxox

My name is Cindy said...

A lovely card. I find I'm buying more stamps these days that I can use my promarkers with - it's so relaxing just colouring in!!

Oooh, looovely Promarkering there Josephine! I know what you mean about Promarkers, great aren't they? Thanks for joining us at The Stamp Man!

Wow what a beautiful image. Love your project. Thanks for sharing and have a great day. Angela