The Nights are Fair Drawin' In ...

For the One Stitch at a Time special Autism Event, go here. (There's candy to be won there too!)

As we used to say as teenagers, mimicking older folks as it got dark earlier and earlier in the afternoon. Of course, there's still a way to go to the shortest day, and living in the south as I do now, night never falls as early as it did when I was growing up. But still, there's an autumnal coolness to the evenings, and a lot of leaves blowing in the breeze.

And all that's just to introduce a card! 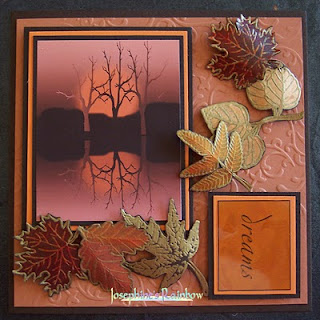 I was feeling uninspired yesterday, and spotting a couple of autumn colours challenges, decided to dig out some leaf stamps I've never used. I embossed the image in gold on brown card and then spent a happy while colouring them with Twinkling H2Os. I've got loads of them now, so I shouldn't be short of embellisments for Autumn cards.

Then, last night, I was playing around in Photoshop Elements. I used some autumn-coloured gradients and the cookie cutter tool using a bare tree image, added a setting sun and shadow background, and you can see the result. It's printed on Ryman Matte photo quality ink jet paper, but it might've looked better on a glossy paper. Not sure about that. The card in the background was embossed in one of my new Papermania embossing folders. These look just like the Cuttlebug ones but are significantly cheaper. I'm not sure they emboss quite so deeply, but it's still a good result. The sentiment is one of a set of film based ones I bought a while ago from The Fruit Pixie. They're all in brown shades so not always suitable for what I'm doing. And the image seems to me to have a slightly dreamy quality - it's definitely not exactly life-like!

A complete contrast to today's other offering too.

Love how you did the reflection and the sunset is gorgeous, thanks for joining us at Fairy Fun Fridays, hope to see you back for our next challenge!

Wow! I love your image it's really gorgeous.I would love to master photoshop. A really lovely design, thanks for playing with Charisma this week. Good Luck!
xx Vee

What a super card, thank you for joining in my Colours of Autumn theme at Allsorts this week and good luck.

Our suster challenge is looking for new DT members http://pennyblackatallsorts.blogspot.com/

This is just gorgeous! I love those autumn colours its all so soft and lovely! Hugs Rebekah xx

Wow! what an amazing card, love the colours and the main image. So Autumnal. Thank you for joining us at Fairy Fun Friday this week.
Hugs
Suzi x

Bravo!!! This is a totally gorgeous piece of art. The leaves are fabulous but the show-stopper is the printed tree image. I am totally intrigued with how you did that. I have PSE and thought I was getting a pretty good handle on using it, but this is totally beyond my comprehension. Guess I better drag out my PSE for Dummies book and get learnin'!

Oh, and by the way, beautiful embossing too. So happy you could join in the fun with us this fortnight at Fairy Fun Friday.

the scene you created is fabulous, Josephine! i love that you were confident enough to try this, and thank you so much for playing along with the Charisma Gals this week. i hope this means you'll be creating more of your own scenes - you rocked it!

Jo this is a really stunning card. Beautiful work with the reflection and the colours are just perfect.

Wow this is really stunning, thanks for joining us at paperplay with this gorgeoous autumn inspired card, hugs Liz xx

such fantastic work! Thank you so much for joining the Allsorts challenge this week and good luck.