This is my second post for today, so for my OSAAT DT card, please scroll down.

I hate making cards for men. Well, maybe I don't hate doing it, but I find it terribly uninspiring, and I never seem to have embellishments to hand that'll work. I make all the cards for the birthday club at school, and up till now, that's been easy as it's been all women. Then, in September, a young man joined the staff, and it's his birthday in a few weeks.

Fortunately, I spotted a stamp set in the Hobbycraft sale - one of the Papermania Man's World sets, and I came up with this. 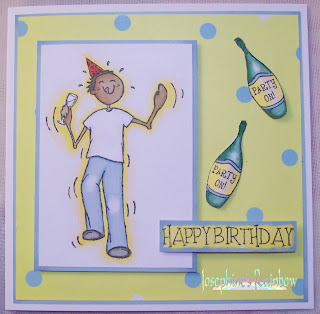 That's my first attempt at a darker skintone too. Thank goodness for Promarkers! I normally base my skin tones on my own (because it's always at hand!) And believe me, I'm the sort of pale that Billy Connolly claims is only white when it's tanned. The underlying shade is more blue! Fortunately, there isn't a lot of skin to colour in this image!

I did find some embellishments in the sales, and thought I had the ideal one for this card. I thought it was a rugby ball (and he's a rugby player) but I was informed by my son that it's an American football, so I might as well bin that, as I can't imagine it'll ever get used. Instead, I coloured and cut out a couple of the bottles from the same stamp sheet, as well as a sentiment, and teamed it with some magazine freebie paper I've had for ages.

I'd like to enter this card into the following challenges:
Craft Your Passion which has an 'anything goes' theme,
Creative Inspirations who want us to use something new (stamp set)
Fab 'n' Funky where 'anything goes'.
Posted by Josephine at 19:18

Great male card! Love the colors! Thanks so much for playing along with us at Craft Your Passion in our "anything goes" challenge!

I do too, but you did a fantastic job out of this one, looks so much fun too :) xx

What a great card. Fantastic.
Thanks for joining us at Fab 'n' Funky this time.
Sharon x

I hear ya, men's cards are HARD! That's when I dig deep into my scrapbooking supplies for stickers and such! You done good. Men don't usually do 'froo-froo' anywho!! lol Thanks for showing us your NEW stuffs at Creative Inspirations this time round. Happy Crafting!