The theme for this fortnight at Crafty Cardmakers is Pearls and/or Gems. I've made a couple of cards using paper embroidery for this challenge. A craft group I belong to tries many different crafts, and a little while ago I did a session on paper embroidery and I made some samples in advance so that people could see the sort of thing that can be done. The other members aren't necessarily cardmakers, or even papercrafters, so it seemed a good idea to have some good examples. 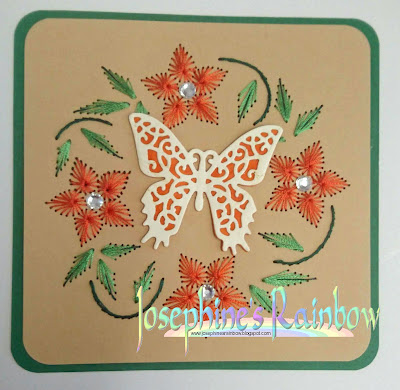 This first card was made using a pricking pattern taken from 101 Ideas for Embroidery on Paper by Erica Fortgens. I used two strands of machine embroidery thread to complete the stitching, and finished each flower with a sticky gem. The central butterfly embellishment was cut using a Spellbinders die set.

Before I discovered books on paper embroidery, I bought some stencils. I used a Quadrant stencil to prick the pattern for this card. 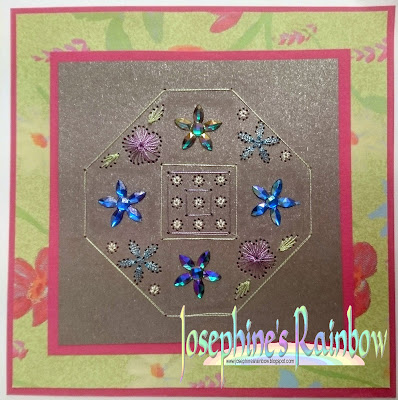 Again, I used machine embroidery thread for the stitching, this time using metallic type threads. I finished the card using some flower shaped gems I've had for many years. They actually reflect a mix of blue, green and pinkish tones depending on how the light hits them, but some shades seem more obvious in the photo. The background paper is from a pad which was a magazine freebie quite a while ago.

Both of these cards are gorgeous!

Lovely stitched cards Josephine. I am in the throws of stitching, but not on cards. Emma has just started school and I am on label stitching duty :O)
Hugs Kimx