I bought some Coloursoft pencils a year or two ago, and I even used them, but was never that pleased with the result. I'm more familiar with my Promarkers, and so often, especially when I've got DT commitments, I go to them for colouring because it's the simplest option. In particular, I remember having problems with getting a believable skin tone. So, when I found I had some colouring time while getting over a nasty lurgy, I decided to find an image that didn't have any skin tones and have a go! 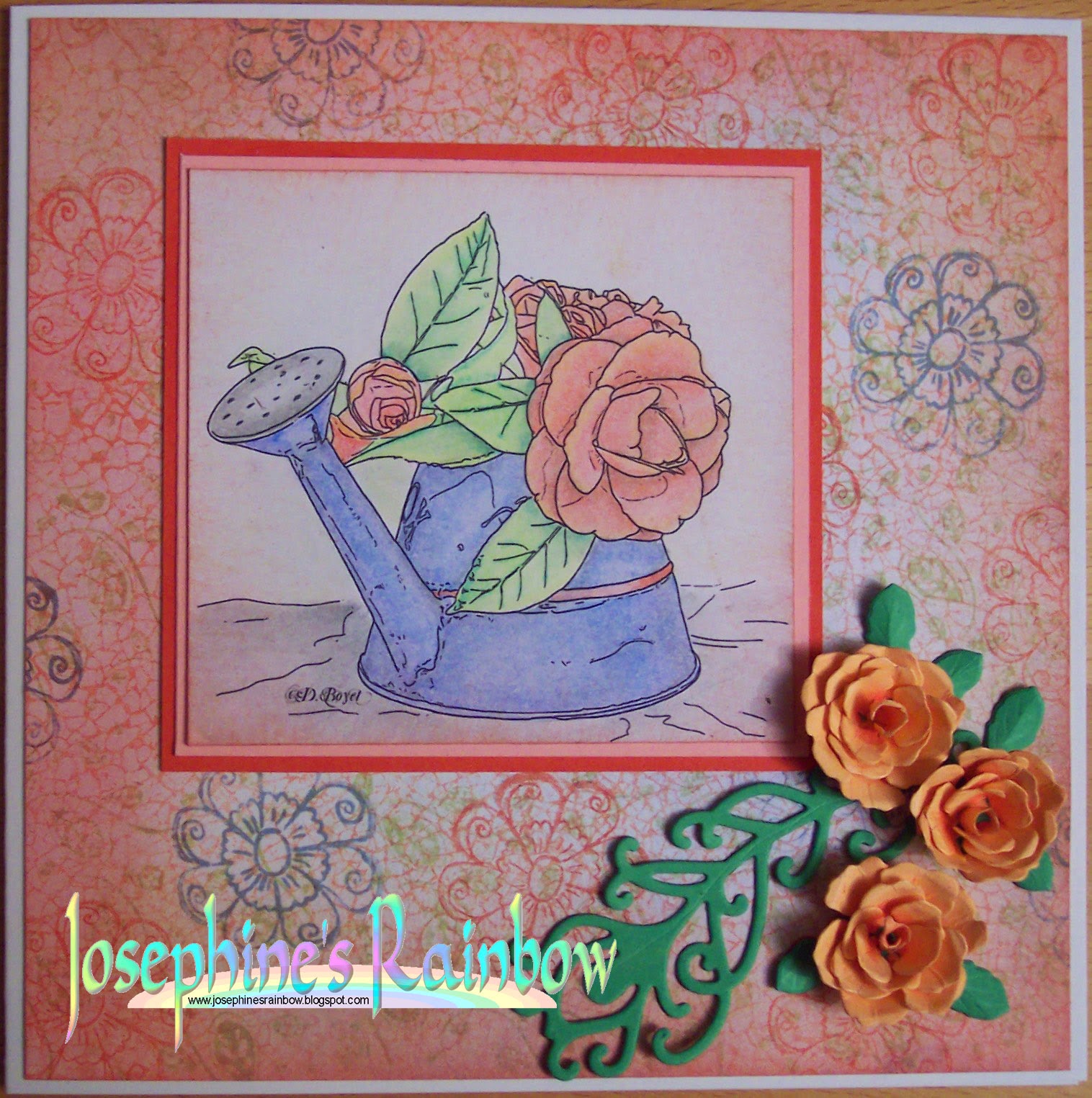 I used an image called 'Camelia Still Life' by Blackberry Lane. I got the image as part of my DT work for the Stitchy Bear outlet, but she doesn't sell through them any more. However, a little google magic and I came up with this.

I used my pencils and blended with baby oil. I was pleased enough with the result to want to make it into a card, so this weekend, I got out my background stamps and ink and set to. I've used a variety of stamps from Indigo Blu, Inky Doodles and others whose origin is lost! I stamped in Distress Ink and added some further colour with Pan Pastels. For the flowers, I used Sizzix dies, and the feathry leaf is from Spellbinders.


Flush with success doing that image, I found one of my stash of pre-printed images which needed skin tones and had a go there too. 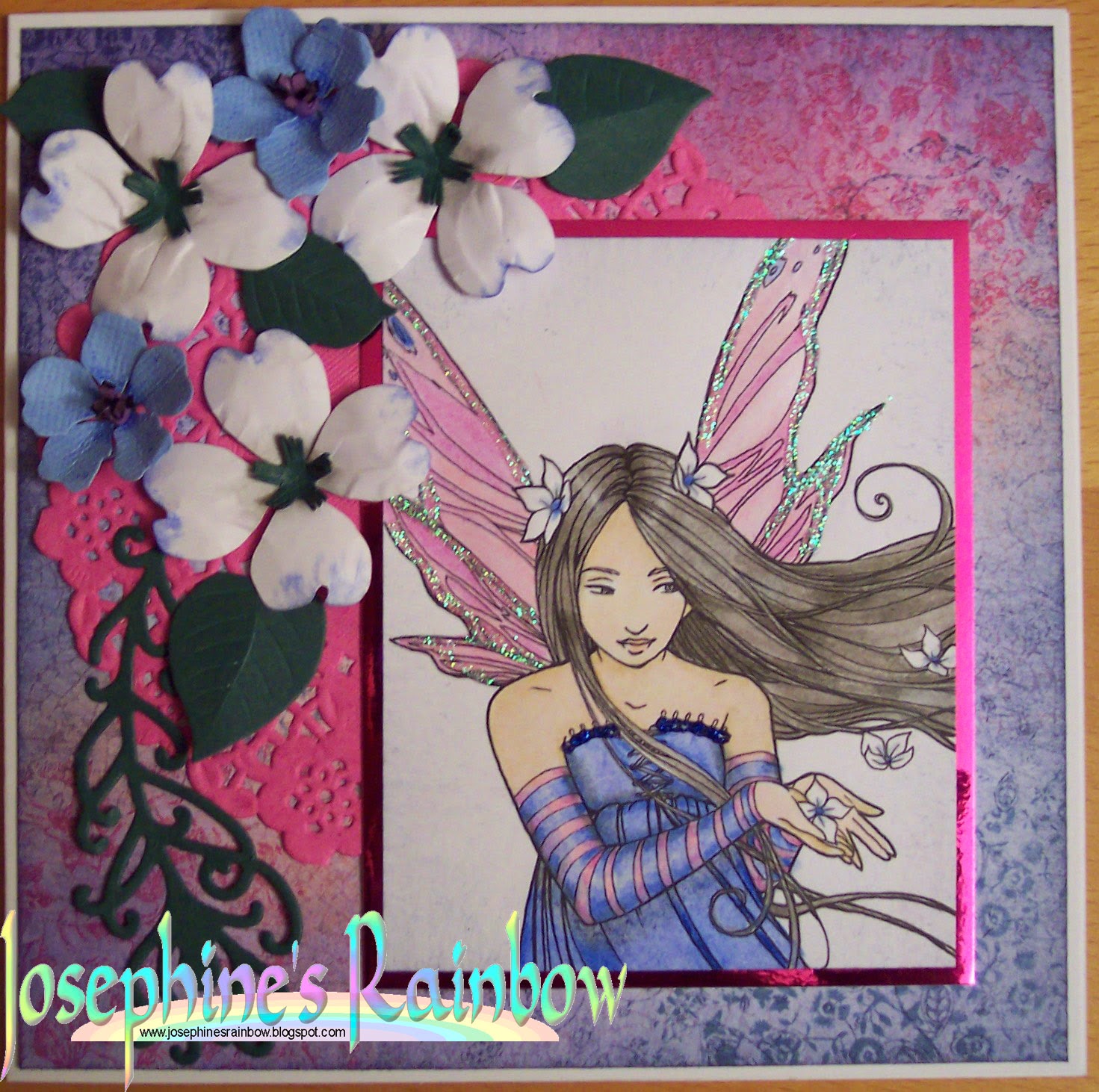 I was happy enough with the skin tones, to go ahead and do the rest of the image. In fact, I think that's one of my best attempts at black hair ever - somehow with Promarkers, I seem to end up working so hard to blend that I get too much bleed. But, enough of that! The image is a gorgeous digi from Crafts and Me by Sara Burrier. As above, the background is a result of various stamps and Distress Ink with some Pan Pastel to finish it off. I added some glitter glue and liquid pearl to the image, and finished the card with a paper doily, and some more flowers made using Sizzix die cuts and the same Spellbinders feathery leaf.

Absolutely love your card, I love the bright colors you have used and absolutely love the image. Would love you to pay me a visit and join my blog, I have joined yours too. Thank you for joining us at Challenges 4 Everybody. Remember you can enter 3 projects each month. I have a few tutorials and templates on my blog now if you would like to try one. Good Luck! Ange DT:)

Very Pretty Design, love all the texture..thank you so much for sharing with us over at Fan-Tastic Tuesday we would love you to join us again next week for another fab challenge...Good Luck
Hugs
Suzy B~Owner~Fan~Tastic Tuesday
Xx

These are both beautiful, I am wanting the new Spectrum Noir pencils to go my my pens, hoping I can get some where near you high standards. xx

Beautiful card and love that background paper you have created. Gorgeous image. Thankyou for joining in with the challenge at Digi Galore. Good Luck and hope to see you again soon. Hugs Amanda (DT)

These are so pretty!

Very pretty square cards, thanks for joining us at Fan-Tastic Tuesday this week.

Lovely card :) thanks for joining us at tstr challenge
Shaz x

Gorgeousness all in one place - Thanks for sharing with us over at Eclectic Ellapu - hope to see you again in future challenges.

I'm glad you gave them another go...they images are colored perfectly! Great job. Thanks for playing with us at The Shabby Tea Room!

Just gorjuss hun, thanks for joining us at Digi Galore.
Shell xx

Gorgeous, thanks for joining in fan tastic x

Your cards are beautiful. I love your coloring with my favorite medium, colored pencils. Thanks so much for sharing with us at Melonheadz Friends for our Girly Challenge.

Thank you for sharing this beautiful card with us over at Lacy Sunshine, Hugs Kerry DT x

Lovely card, well done! Thanks for joining us at The Crazy Challenge.