That's what we've had! And very nice it's been too. We managed to get out for a walk yesterday while the sun was shining, and today I've made some bread and between those things, I've been making some cards. 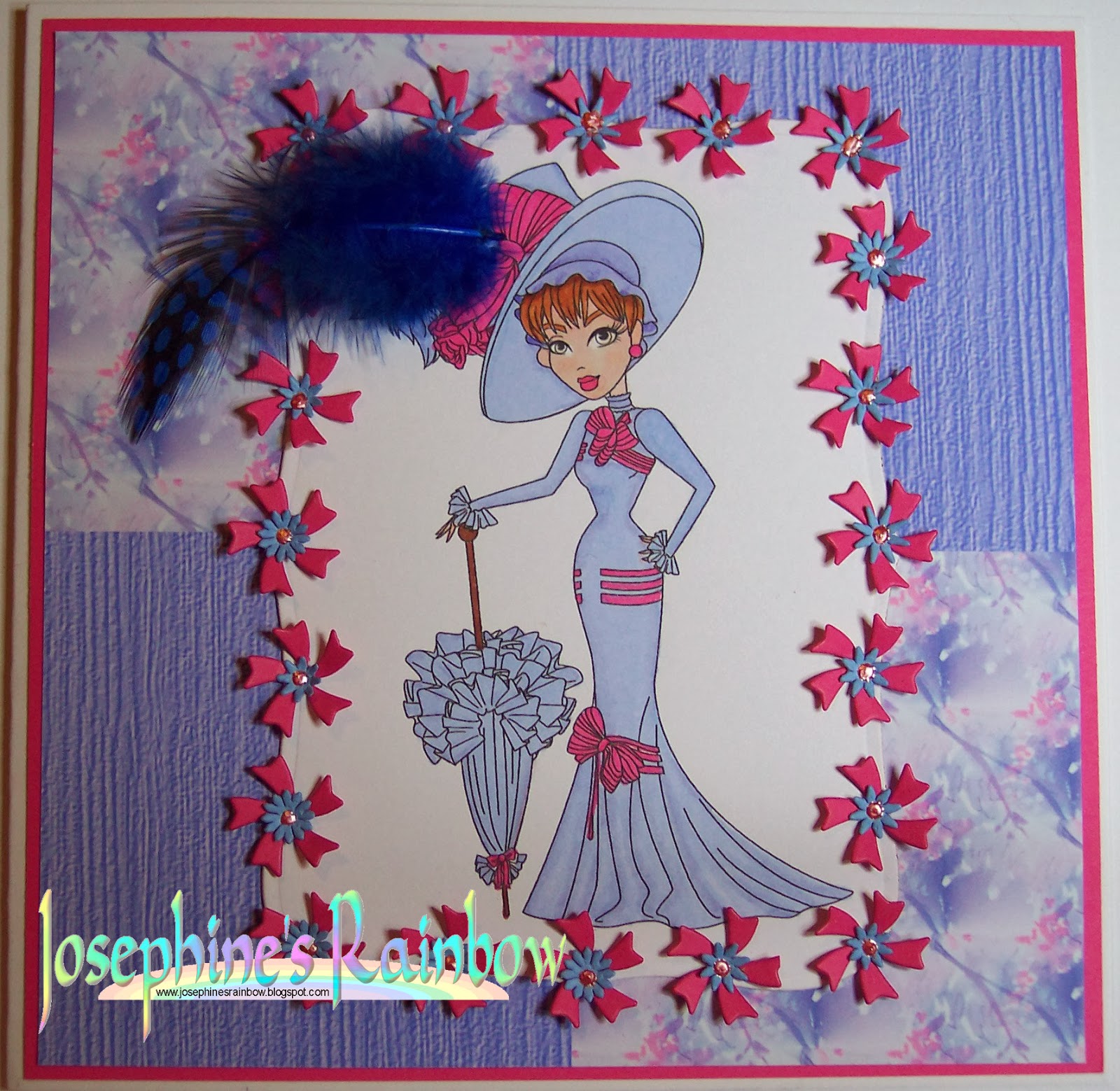 This first card uses an image I won some time ago. It's from Sassy Studios and it's called 'My Fair Lady'. I teamed it with some papers from my Pamela West CDrom. I did tweak the colours the papers to bring them closer to one of my favourite Promarker colours - Bluebell. I combined the papers in Photoshop Elements before printing them. I cut the image using a Spellbinder die, and coloured the image with Promarkers, finishing her beautiful feathered hat with a feather from my collection. Rather than matting the image, I decided to 'borrow' an idea I spotted recently. I thought I'd remembered where I found it, but when I looked, I couldn't find the project. So, apologies to whoever it was who I saw surrounding an image with flowers! The flowers were cut using some Cheery Lynn dies and finished with a liquid pearl in the centre.

The other card is really quite different. 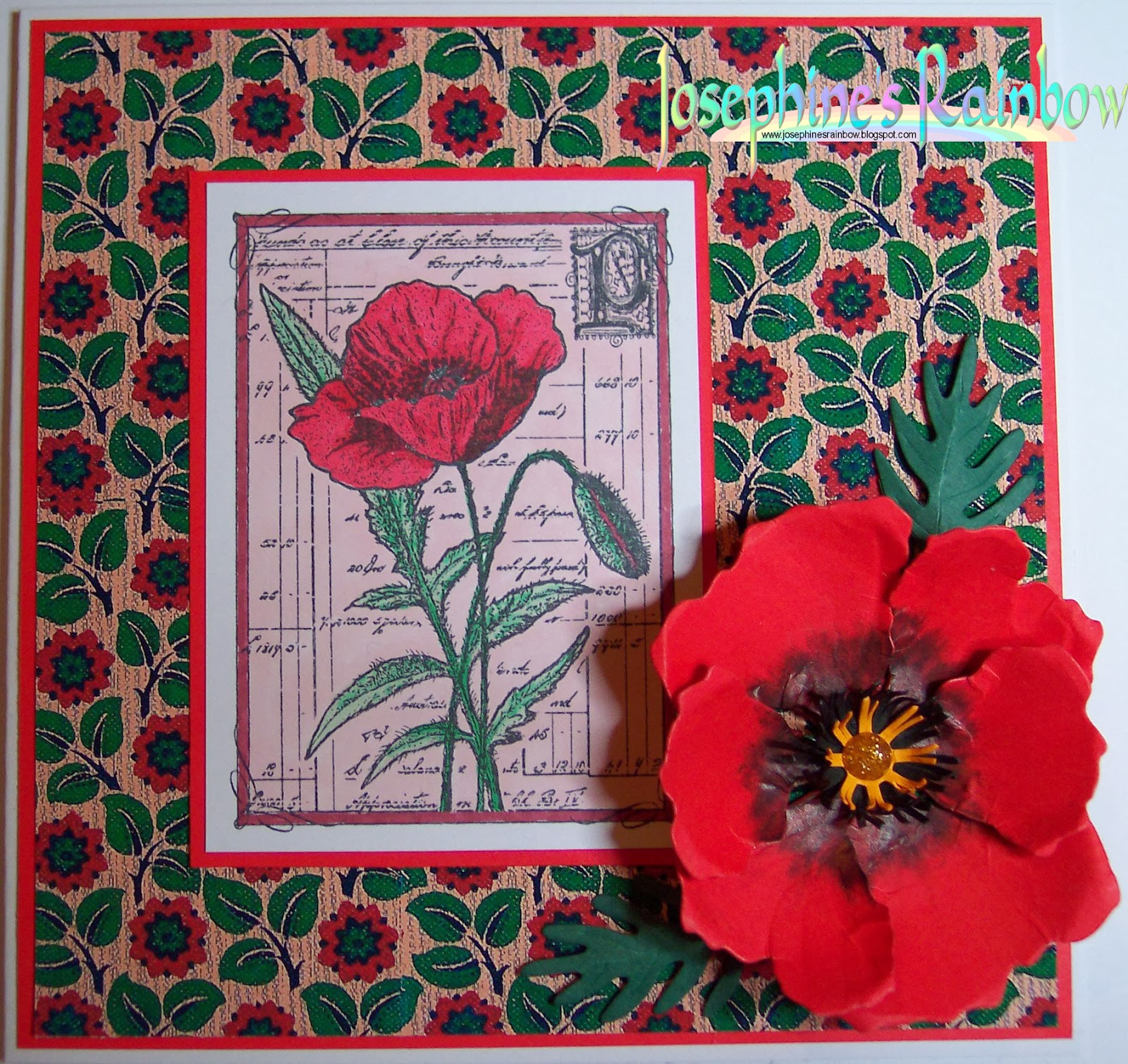 Here, I've used a stamp from Crafty Individuals. I treated myself to a few in the run up to Christmas, and coloured it over the school holiday. I went searching through my digital papers to find something to use with it, but didn't find anything quite as I wanted it. I did find a paper that came from my Crafty Emporium CD (from Crafty Computer Paper), but it had a grey background. A little magic from Photoshop Elements, and the background is rather closer to the Promarker Shade 'Pastel Pink'. The image was coloured with Promarkers. The flower was made using a set of dies from Susan's Garden. The poppy is a little big for a six by six card - I do wish she'd done a smaller version of her dies - but as a single flower in this instance, I think it works. I shaded the flower with Pan Pastel in black and finished it with a liquid pearl.

These are so different and both so lovely. I love the big flower on the poppy card.

Gorgeous Designs ... Thank you for taking the time to join us over at Fan-Tastic Tuesday we would love the pleasure of your company in next weeks challenge as well .....
Hugs
Suzy B ~ Owner Fan-Tastic Tuesday
XX﻿

Lovely card, the feather coming out of her hat is brilliant. Thank you for joining us at The ABC Challenge for our 'G is for Girls' challenge xx

Two beautiful cards top one is very elegant. Thank you for joining us at I♥Promarkers good luck Ginny x

Lovely card. Thank you for joining us at Card and Scrap
DT-Kirsten

Beautiful creation, love the feather in her hat!

Thank you for sharing with us at Natalie & Amy's this month, good luck!
Hugs Shell xx

lovely card.
Thanks for joining us at card and Scrap.
DT-Gitte.

Very beautiful card :)
Thank you for joining us at Sunflowerfield Designs.
Hugs, Mari

lovely cards! thank you for joining us this week at Catch The Bug!

Love that feather, Josephine! Perfect embellie for My Fair Lady. Thanks so much for entering our "Anything Goes" challenge at Doodle Garden this month. Good luck in the draw and we'd be honored if you came to play regularly in our monthly challenges.
NanaConnie DT

Such lovely cards. It sounds like you had a great weekend. Thanks for joining us at Bugaboo this week.

Pretty card and love the feather touch. Thanks for joining us this week at Catch the bug.