One Stitch at a Time Challenge 136

This week, at One Stitch at a Time, we're sponsored by

This week, I got to work with an image by Stitchy herself called Ladybug. 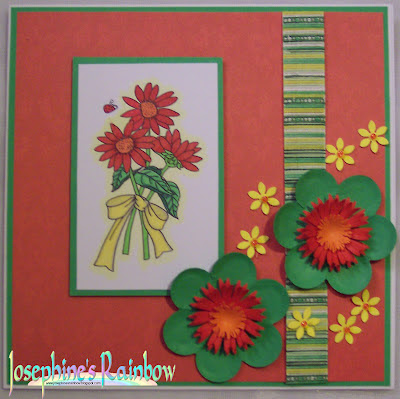 Isn't it a lovely image, with so many uses? Because of the ladybird, I decided to make red a predominant colour for the image, adding some orange, yellow and green. I coloured with Promarkers, then made some flowers using punched shapes and some beads. The paper is from a Serif pad that came with a magazine a while ago, and I finished with some ribbon from the 99p shop.

Wow I really love the bold colors! And those flowers are just wonderful!!!

Fab card, love the bold and cheerful colours and your handmade flowers look great. Thanks for joining us at I Love Promarkers xx

I love your beautiful flowers on this gorgeous card.
Thanks for sharing it with us at anything goes challenge.
Hugs Emma xx

wonderful Christmas card. Thanks for joining us at Bearly Mine, good luck and hope you will come and play again.
Hugs
Tracey
xx

A very pretty card and the flowers great addition to the card. Thank you for joining us at Stamp-n-doodles for the Anything Goes challenge

Very pretty card. Love those flowers. Thanks for taking part at I ♥ Promarkers this week.

This is a wonderful card and i do love those flowers. Thanks for playing along at OSCC.

Lovely card.
Thanks for joining us at The Crazy Challenge!

Lovely card, great flowers, well done! Thanks for joining us at The Crazy Challenge.