I've never really been seriously tempted to make big cards before. I usually go for about 6 by 6, or if I want a rectangular format, 5 by 7. Occasionally, I'll do an A5, although I rarely make A6 any more as I just think they look a bit basic. But, a few weeks ago, I bought a CDRom which has had me re-thinking, and when I was at Alexandra Palace a few weeks ago, I bought a pack of 8 by 8 cards. I think I might have to keep stocked up with them, too. 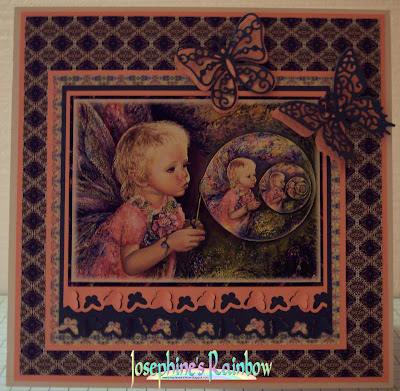 The CDRom is from Joanna Sheen using beautiful artwork from Josephine Wall. There's just so much detail in the images, that it seems mean to print them very small. Having said that I love the images, I've got to say that I'm less impressed with the backing papers supplied. Some are lovely, but some seem a bit insipid compared to the images. The one suggested for this image is very pale and washed out in appearance, and I wasn't sure how well it would work with such a vibrantly coloured image. So, I took a couple of sections of the image, and created a couple of papers by tiling them. The darker paper uses  section of the fairy's wings, while the paler one uses a section of one of the bubbles.

I matted using card from my collection, and edged it with a Martha Stewart punch. The butterflies were made using one of my newer Spellbinders dies - can't remember what it's called, but I love the fact that you've got a lacy version and another that's solid. It's not obvious from the photo, but while the solid butterfly shapes were still in the die, I spritzed with Glimmer Mist in Pearl so they've got a bit of shimmer.

Your card looks beautiful. I have lots of CD roms too, but rarely use them. To be honest I seem to forget I have em, Lol.
I was at Alexander Palace too, had a fab time there x

Beautiful card, there is so much detail to look at in the gorgeous image.
Yvonne x

This image is precious! I love the layout you've created here and the layered butterflies look amazing!!

Thank you so much for playing along with us at Top Tip Tuesday!
Remember you can enter up to 3 projects and 3 tips.
Have a great one!
Lisa xx

This is a very pretty card and I adore your image. Your color scheme is dramatic and I think you've done a terrific job with this card. Thanks so much for joining us at Top Tip Tuesday for our Things with Wings challenge.

Remember you can enter up to 3 projects and 3 tips. Good Luck!

Thats really a mega card!!! But must say a lot of effort taken and lot of planning and some great ideas....thanks for being with us at Incy Wincy this week with such an awesome creation of yours!!!

This is lovely. Thank you for sharing with us at Craft Your Passion. And good luck.

Wow, stunning card! Thanks for joining us at CYP for our Hip to be Square challenge! Hugsxx

Beautiful card Jo, the image is adorable and those butterflies are so pretty.
Thanks for joining us at Simon Says Stamp
hugs Mandy xx