Trust me to take things literally! When I read 'spotlight on dry embossing', i thought I'd try pretty much all embossing. 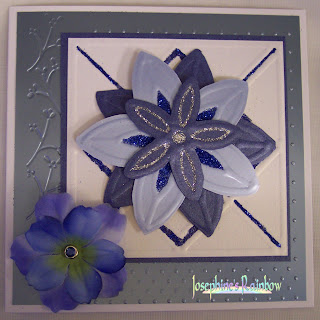 Having said that, I have used a couple of different dry embossing techniques. The background is embossed (and debossed) in my Wizard using both the Cuttlebug Swiss Dots folder and one of their border folders. I used some lovely low-sheen metallic blue card I've had for ages for that.

The main flower and the white layer behind it were embossed using one of the Glitter Girls Keepsake board - can't remember the name of it, but it's teal in colour! It's one of the few they do that's great for square cards, but even so, it's been a while since I used it.


I added glitter to the space between embossed lines in the white layer, and to accentuate embossed lines in the flower layers. One of the things - especially about the Glitter Girls boards, but also true of embossing in general, is that you get a much bigger effect if you use expensive, pearlescent or mirror type card. The white and the dark blue have a gold sheen to them, and the pale blue is ordinary pearlescent. I cut the layers out with scissors. I'd love to get good enough with a craft knife to use one instead, because the scissors tend to stretch the card a bit so that you lose some of the depth of the embossing when you cut. (Although I did go back around the embossing after I cut the shapes out.)

To finish, I added a couple of silk flowers (can't remember where I got those - Mad About Cards, perhaps?) and a brad with a gem centre.

Super combination of techniques Jo - I love the flower! Great colours too - would even suit a bloke.
Hugs
Ei
x

Love the simple colour range in this card makes the embossing stand out so much more. The debossed border has come out really well.