This week, Creative Craft Challenges is being sponsored by Stitchy Stamps. It's their first anniversary, and as a result, the theme this time is anniversaries. Now my oh and I are due to celebrate a 'big' anniversary next year. Unfortunately, the date's at the end of a really busy cardmaking period, and I often end up leaving it to the last minute and struggling to do something I like. So, seeing this challenge, I decided to get ahead of the game! 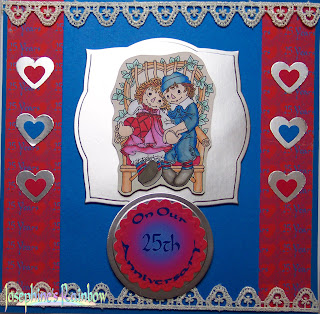 The image is from Stitchy Stamps and it's called 'The Raggedies'. Very appropriate, really, since both my oh and I could be considered to be 'past our best'! It's a lovely image to colour, which I've done with promarkers, and mounted it on mirri-silk type card. The background paper was designed in Photoshop Elements, as was the sentiment, and the hearts were punched.

I'd also like to enter this card into the following challenges:

And if you've started your Christmas crafting, don't forget that this week's One Stitch at a Time challenge is ... Christmas!
Posted by Josephine at 21:41

Fab card thanks for joining us at Creative Craft Challenge & Incy Wincy.

hi thanks for playing along at creative craft, i love the raggedies as well dont stitchy have some amazing digis,
hugs sandra xx

I love this Josephine, the raggedies are just so sweet.

Loving your comment about yourself and your OH too. I am giggling as I type this.

Oh wow Josephine this is gorgeous, I have that image but haven't used it yet, you have coloured it beautifully, this is one top notch card hun.
Hugs
Lorraine x

Thanks for sharing with us at The Crafty Purple Frog Challenge!
hugs
kaos

Awww Josephine, NEVER EVER past your best!!! I too am giggling at your comments about OH, now is that Old HUbby or what?? YOu got me wondering now haha...card is magnificent as always hun, OH will be quite pleased I am sure...no not past your best hun, the best is yet to come :)

Nice card. Thanks for playing with us at Incy Wincy.

This is a lovely card with brilliant colouring. Thanks for joining the One Stop Card Crafts challenge this week, and joining the blog hop.
Hugs
Valx

Great card Josephine, love how you have put it together and well done for seizing the opportunity and getting ahead of the game. B xxxx

A beautiful Christmas card, and a great use of our sketch! I love the hearts, and the beautiful laces.
Thank you for joining Scetchy Colors this week, and lots of luck!
Hugs, Marianne:)

This is fabulous! Thanks for joining in the stamp man challenge x Janet

This looks great, I adore the image you have used. Thanks for joining in this weeks OSCC. Hugs Shelley xx

What a sweet image and beautifully colored. How smart of you to get ahead of the game. I am sure your husband will love it.

Thanks for joining us at Creative Card Crew.