The challenge for this fortnight is an unusual one: we want you to use a single word sentiment multiple times. I was initially stumped for this one, but looking through my stamp collection, I came across several versions of the word, 'happy', so I decided to see where that took me.

And ... I've finally bought some Brushos. I've seen the results people have got with them, and wondered, and finally decided to splash out. (Although, my initial wish to go straight to the manufacturer failed when their website insisted on using a Captcha that was almost impossible to decipher, resulting in multiple attempts at registering. When I finally did that, I discovered they wouldn't take Paypal. Now, I don't like giving my credit card details to small companies whose security I don't have any information on, so I decided to save myself some money and go to Amazon instead. It's such a shame, but smaller companies that want to compete with the Amazons of this world really need to either do Paypal or Amazon pay. Anyway, back to the card. 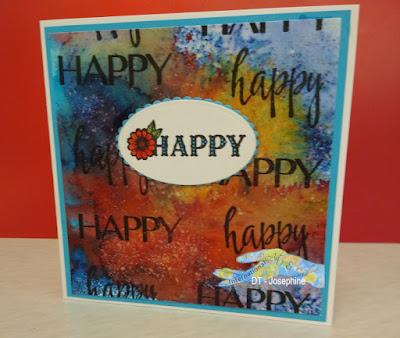 I created the background with (mainly) Brushos, although I added a little Perfect Pearl in Interference Red and then some red Pixie Powder too. It's probably slightly more obvious in the next photo. 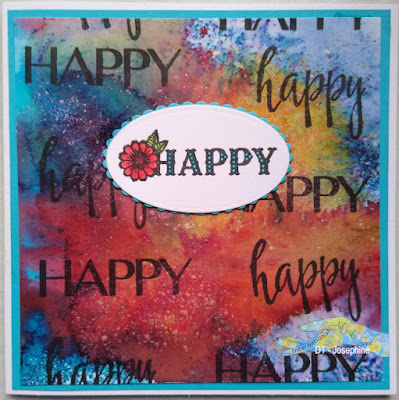 It did add a little understated sparkle.

The background stamping used stamps by Sweet Dixie and AlteNew. The central stamped sentiment used a stamp from Creative Stamping magazine, and I coloured it with some Brushos dissolved in a little water. The ink used throughout was Versafine Clair.

And then, I cheated (just a little) 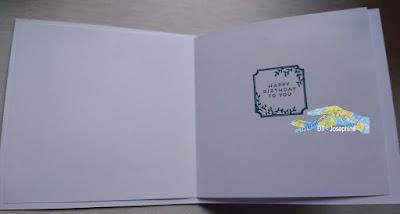 The stamp here came from Craftwork Cards. I just couldn't leave it as a single word because that just doesn't make sense to me, at least for the word, 'happy'. But, Happy, happy, happy .... Birthday makes perfect sense to me!

I do hope you can join us this time!
Posted by Josephine at 12:00

Wanted to edit my comment. Sorry that I wrote the wrong name, but I still love your card Josephine.

OOOOOooooo total gorgeousness and I hope you love your purchase of Brusho pigments as much as I do mine. Don't use them often and they go such a long way but when I do play with them it is always fun :) xxxx