The theme for this fortnight's challenge is Lace and Pearls.

I belong to a craft group that's made up of people who do a variety of crafts but mainly include pottery and knitting/crochet. Three times a year, we plan our sessions with one member agreeing to lead a session. As a papercrafter, I find that quite hard. It's not that I don't have ideas, but rather that I struggle to come up with ideas which translate to a hall where I don't have access to most of my craft room!

For the next meeting, I'm going to take this project as a suggestion. It's a basic pop up card, and obviously, people can decorate it any way they want - pre-printed images, decoupage, stamped images, things cut from magazines. Anyway, this is what I came up with. 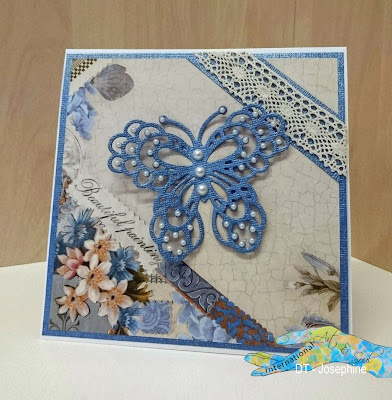 The front of the card. I've used some paper I bought years ago. It was part of a lot which I suspect had been cut from much larger sheets. This one was always a favourite, but I'd never found the ideal project (until now.) I've added a strip of card and lace, as well as the butterfly which was cut using a very old Marianne die. I added lots of sticky pearls and some matting that's about it for the front. 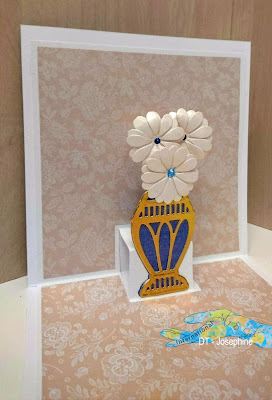 The inside. As you can see, the 'pop up' mechanism is about as simple as possible! I've covered the inside with some Dovecraft paper, and used dies from Tattered Lace and Joanna Sheen to make the flowers and vase. 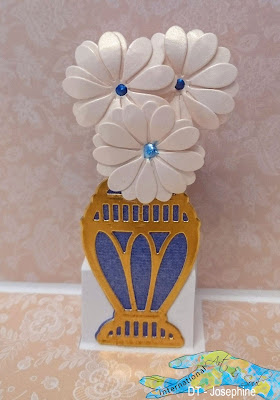 A close up of the vase. 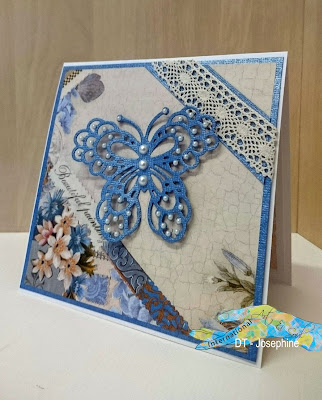 And a slightly different angle on the front ... just because!

A beautiful card and very elegant. I loved this theme. Hazel x

So beautiful Josephine. I love the butterfly and your design is fabulous. Hugs, Maggie