I was very tempted recently by some Chocolate Baroque stamps. I treated myself to a set of older stamps, of which more later, and two of the recent additions to the range - the 'big bold backgrounds' - specifically the ones with baubles. I've been playing - really playing and getting my fingers inky and everything, and I've come up with a couple of ideas for them, and still haven't gone the more normal 'stamp and colour' route.

This first set use Perfect Pearls and Versamark ink. It's never quite as bold as a result as I think it's going to be, and in this instance, some of the card I used had a slight texture, making the stamped image a little less crisp than I had hoped for, but I was still fairly happy with the result. 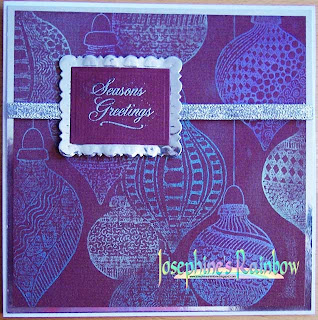 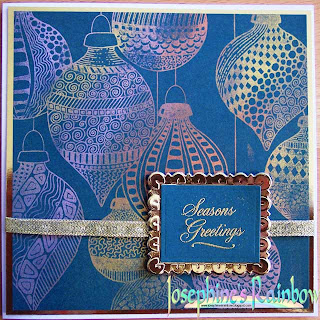 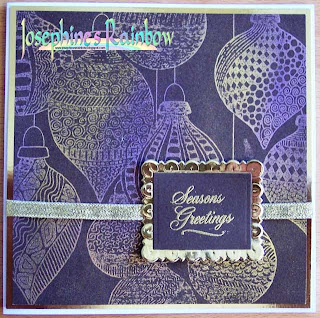 In all three, I've finished with some ribbon and an embossed greeting - using a 'no inkpad needed' stamp I've had for many years. Although it's limited to black ink, the ink stays wet long enough to allow embossing, so it's really quite versatile. Dies used are from Spellbinders.

The next set really got my fingers inky! First, I took some watercolour paper and my Aquamarkers. I used the acrylic block technique recently featured in the Chocolate Baroque Monday Mojo post. I scribbled some colour onto the block, sprayed with water, and then placed the paper on top. When it was dry, I inked the second of the two stamps using a couple of Distress Inks, and stamped. Because of the texture of the watercolour paper, the impression is fairly faint, but still quite attractive, I think 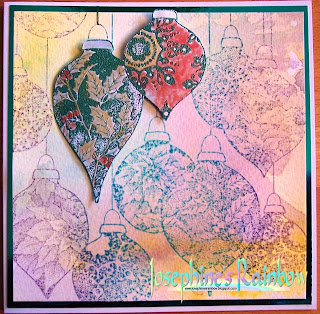 For the second layer, I again applied the stamp - this time to some smooth card, and I inked with Versamark before embossing with either Cosmic Shimmer or a metallic copper powder. I then picked out some of the uncoloured areas with an embossing pen and applied some Perfect Pearl. 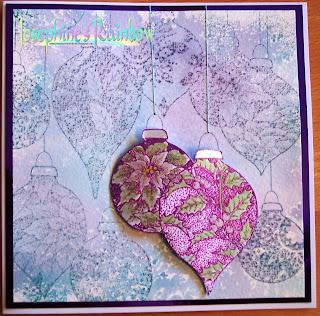 In this final card, I again used watercolour paper, but had no coloured background. Instead, I added a little colour to the baubles using my Coloursoft Pencils for a fairly understated hint of red and green. In this instance, I used a Big and Juicy stamp pad to apply the image to the background. 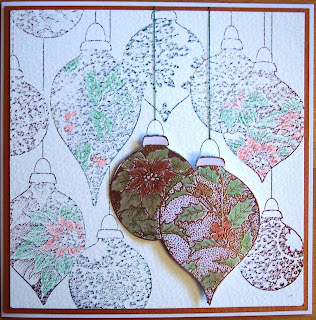 No challenges this time. I generally enter challenges with my DT cards - because that's only fair to the sponsors. But I rarely do more than an occasional cursory check of winners lists, so not entering really won't make an awful lot of difference!
Posted by Josephine at 13:56