One Stitch at a Time Challenge 167

This week at One Stitch at a Time, our theme is: Pretty it Up! You can do what you want, provided you add something pretty to the mix - flowers, butterflies, glitter ...

who are offering some Promarkers as the prize. And who doesn't need a few more of those?

This week, I chose a gorgeous silhouette from Stitchy herself. To be honest, I think it's really pretty on its own, but I added some flowers anyway! 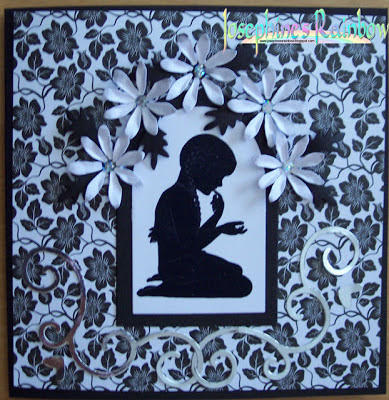 I printed it on my usual favourite Ryman matte ink jet paper and cut the image using a Sizzix die. The paper is from the Papermania Capsule collection. I assembled the flowers using a set of Sizzix dies designed by Susan Tierney Cockburn. I bought one of her books a while ago and have played with making flowers using punched shapes, but to be honest, I only tended to do 'as close as I could' with those due to the cost of punches! Having said that, there were enough ideas that I was able to make some pretty flowers even though they're probably not botanically correct. When she brought out his range of dies, I had to take a look and have bought a few - including the one I used here which is the daisy set. It's probably my favourite because it produces the smallest flowers. Having said that, I intentionally kept them fairly flat so the card will go into an envelope. I dusted the tips of the petals with black pastel, and finished each flower with a dollop of glitter glue. The die cuts at the bottom use silver mirror card, and were also cut with Sizzix dies.

I must say that, when I had my Wizard, I stuck almost exclusively to Spellbinders, Marianne and Nellie Snellen dies. Having bought the Big Shot Pro, I've tried some dies from different manufacturers, including those that have ejection foam, and I've got to say, that it seems like it's a way of ensuring the dies don't last very long. The foam seems to become damaged quite easily, and bits of card can become lodged in the foam. I'd much rather have to poke die cuts out with my trusty poky tool and even use some wax paper for the more intricate dies. I'm very glad the flower dies are from the Sizzix Thinlits range which are more like Spellbinders style - no ejection foam!

Gorgeous card I love your image and your flowers. Thanks for joining us at TPS, good luck with the challenge. hugs Shirleyxxx

What a pretty card!

Thank you for joining us at Card and Scrap :)

This is so lovely & elegant Josephine, I just love it.

Interesting to read about the Big Shot Pro, I have always wanted one...

Great card! Love the silhouette. Thanks for joining at Digi Haven: Anything Goes One Year Anniversary
Hugs
Dewi

Beautiful card.So striking.Thanks for joining in with us over at Nutcrafters.Hugs Debbie x

Very inspiring way you used the flowers on your creation. Thank you for sharing your flowers with us at 4 Crafty Chicks.

Beautiful card and I think your flowers look fabulous!thank you for joining us at BMC hope to see you again soon
hugs
laney

Great card - I love your design paper and the black & white theme!

Thank you for joining the challenge with the Creative Card Crew!

Lovely card! Thank you so much for joining our Bearly Mine Challenge. Good luck!

Thanks for playing our flowers challenge at 4 Crafty Chicks, very pretty!

Beautiful card!
Thanks for joining us at Card and Scrap:)

Thank you for joining in my mono challenge at Nutcrafters.

Beautiful elegant card.
Thanks for playing along at TPC this week.
Good luck.
Debs xx

Hi Josephine,
Just wanted to say thankyou very much for the paper flowers prize from OSAAT challenge 165. They arrived today. You may see them very soon on an upcoming OSAAT challenge.
Debbie J