I've managed to get a couple more cards photographed, so here they are! 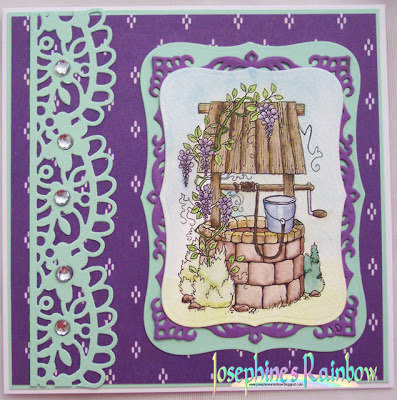 This is an unusual card for me - not least because it's watercoloured! The gorgeous image is from Becky Muir and I printed it out ages ago. I also watercoloured it ages ago - about the time I first got my Aquamarkers. But for various reasons, I never did anything with it and it's languished in a box until recently. I've always loved the image, and I was reasonably happy with the watercolouring although I'm not generally.

So, I cut and matted the image with various Labels 8 Nesties, added some paper from Papermania and a Sizzix die cut finished with some sticky gems, and that's it!

Now, for the second card, if, by any chance, my daughter is visiting here, she should leave now. No scrolling down, please. (I don't think it's likely she'll visit, but it's a possibility.)

So, now, the other card is for my daughter's 19th birthday. 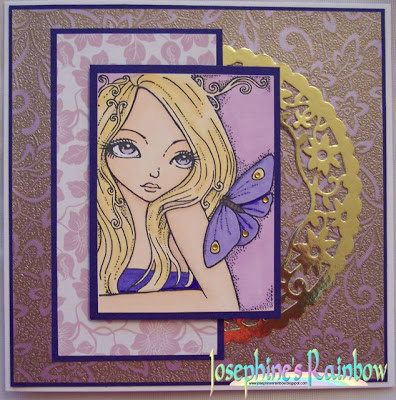 Of course, this is a Ching Chou Kuik image, and it's been coloured with Promarkers. The stamped image was kindly given to me by a blogging friend ages ago, and I've been saving it for a special occasion!

In the background, I've used some paper I got on clearance from Craft Creations last time I put in a card order. It's really pretty - embossed and foiled too. The other paper is from Papermania.

The die cut is from Cottage Cutz. I'm reasonably impressed with how it's cut the mirriboard here - although it took a lot of passes through my machine. I think the problem I've had before with this die is due to the ejection foam. Attaching the die to the card as I would a 'normal' die doesn't work as the card seems to stretch during the first pass and subsequent passes shave bits off each cut line. Here, I've used eight bits of tape to hold the card securely all round, and I've then run it through with extra shims and at different angles until it seemed to be cut. Even so, there are a couple of areas where the paper behind the mirror finish wasn't completely cut, but I've managed to finish that by hand.

Forever Friends where they want animals/butterflies or birds,
Hanna and Friends where anything goes,
Moving Along with the Times where it's 'Only Girls Allowed',
Flutterby Wednesday where it's an open challenge.
Posted by Josephine at 20:53

Thank you for joining in with the Forever Friends Monthly challenge

Wonderful cards! Thank you for playing along with my Flutter By Wednesday Challenge!

Beautiful watercoloring and a gorgeous card! So glad you linked up at Craft Us Crazy!

Wow that image is gorgeous - love the purples! Thank you for playing with us at Flutter By Wednesday!

totally gorgeous and so pretty, thank you for joining us at Forever Friends
Hugs Kate xx
GDT

gorgeous cards..love the colours and your design..thank you for joining us at Sweet Pea Stampers this month
Lozzy x

Love both of your cards, the 2nd is perfect for our challenge.
Thanks for playing in our forever friends monthly challenge.
Laura xx

Such a delightful Sweetpea image,at least it looks like their range. Love the layered design and the colour combination you've chosen too. Thanks for playing at Forever Friends monthly challenge and good luck.Hope to see you back 1st of march for a new challenge. Bettina xx

What lovely cards - the first one is so pretty and I think your watercolouring on the image is lovely.

I loooove the second one - but then I do love Ching Chou Kuik's images. I love the colour scheme you've chosen and the pretty papers and delicate die-cut.

Thanks for joining in our "Use a Digi" challenge at Sweet Pea Stampers this month. :)