A Window and a New Toy

Well, I finally took the plunge and got myself a new diecutter. I've had my Wizard for several years, and while it cuts simple dies well, it's limited in size, and as dies have become more and more intricate, it's been struggling. I considered both the Grand Calibur and the Big Shot Pro, and finally decided on the Sizzix machine because I'm hoping it'll keep going for a long time.

It's very big, and I've had to dedicate a corner of the kitchen worktop to it, but I knew it was big before I bought it. It's definitely straightforward to use, and I should be able to use almost any dies in it. I've always pretty much limited myself to wafer thin dies with the Wizard because mine can't reverse, so any 'new' sandwiches are a risk. I'm looking forward to trying out some Sizzix dies to start with.

On the downside, after just a week of use, I broke my cutting plate. I've only used recommended sandwiches, and I must admit, I'm disappointed by that. Replacement plates are not that expensive, but I really hope that turns out to be a bit of bad luck. I've since found that I can cut simple shapes without one of the recommended layers (the solo shim) so I'll only add that when I need to do something more intricate. And then again, I've still got the Wizard, so I can use it for a lot of things. We'll see.

So, what have I been doing with my new toy? Well, I made a Christmas card, of course! 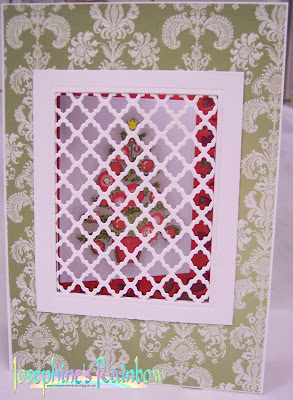 Here's where the BSP definitely comes into its own. I cut the Spellbinders fancy lattice in just four passes through the machine. (It took me 16 or so with the Wizard.)  I cut a standard Spellbinder's rectangle out of white card and trimmed it to make a frame. The paper is from a pad I've had for several years and can't remember whose it is. 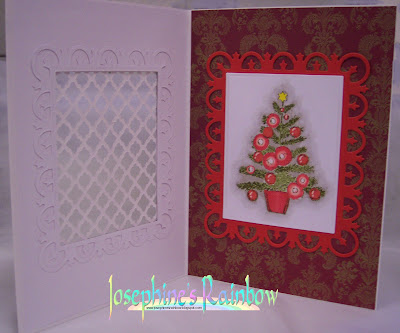 And the inside! The image is from a set of Snowman stamps from Crafter's Companion. I stamped it in green ink - can't remember which variety - and coloured with Promarkers. I used the rectangle die to cut the image and then framed it using the Spellbinders Fleur de Lis rectangle. I did a similar cut for the back of the window, and the paper comes from the same pad.

Elegante! Lovely Christmas Card!
Thank you so much for joining us at Sketchy Colors this week!
Hugs, Jannhild

Wow so elegant love the die, thanks for sharing with us at ATSC, hugs Liz xx

What a lovely card, thanx for joining us at NMWC and good luck, hugs, Marion

Gorgeous card, you've put your new toy to good use ! Thanks for joining us at FSC. Sue C x

This is beautiful. I love the window die. I am glad you are enjoying your new toy! Thanks for playing along with Great Impresions!

Beautiful... Gorgeous window.. and Great coloring of the Christmas Tree! :o)
Thank you for joining us at ATSC! Hugs Sol :o)

Beautiful card and love the window idea.
Thanks for joining in with our FSC to die for challenge.
Fliss x