Scroll down for this week's OSAAT challenge project.

Seems like a while since I did a card just because I wanted to, although that's largely because I've spent the last week fighting a nasty chest cold and not getting enough sleep as a result. It's still around, but as it's now half term, getting caught up on sleep shouldn't be a problem!

Yesterday, I snagged the cutest free digi from Pollycraft, and I was inspired to do this! 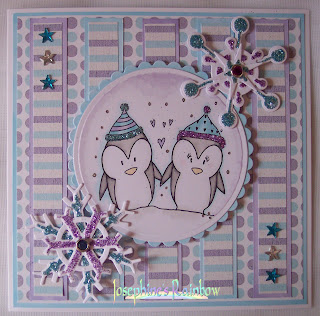 It's called 'Penguin Love' and it's available for a short time. I coloured the image with Promarkers and added detail with Sakura Stardust pen, then added some glitter to their hats. I used the sketch at Sketch and Stash which I've been hankering after doing since it appeared almost a fortnight ago! I used colours to fit this time's Colour Create challenge - aqua, purple and white. (The colour I chose for purple is Promarker lilac which I know can seem a little grey on some computer monitors.) I made a couple of background papers using my Promarker conversion chart and Photoshop Elements in spots and stripes to follow the current Allsorts challenge. It also fulfils the requirements for this week's Wild Orchid Crafts challenge which is to use pastel colours.
Posted by Josephine at 16:05

Awww this is fantastic, I love these colours, have just done a card using these, I think they are beautiful for Christmas. PS I also snagged this cute stamp he he

OMG this is gorgeous, love the colours Josephine. I bagged this image too & you have inspired me to print it off..lol

thank you for joining us at sketch and stash

It's just sooo cute Josephine, love how you have used the digi and the colours you have chosen. Hope you are much better very soon.
Take care. B xxxx

Gorgeous - fab layout and your snowflakes are great accents! Thanks for joining us at Colour Create this time around. Juliexx

Luv this card! fab image & great colours ~ thanks for joining us at Sketch & Stash

Georgeous creation with beautiful papers and nice details! Thanks for joining us for our WOC challenges :)
Hugs, Lena K

Wow! You made the colours look so pretty! I love the little penguins and the papers and snowflake embellishments are superb.
Thanks for joining us at the Colour Create Challenge.
Sharon xx