One Stitch at a Time Challenge 24

The challenge at One Stitch at a Time this week is to use a sketch.

The challenge this week is sponsored by Sew Many Cards, and you'll see some of the design team using their images, while the rest are using images from the Stitchy Bear store.

This week, I got to use one of the images from Lexi Creations at the Stitchy shop, and it's so cute! 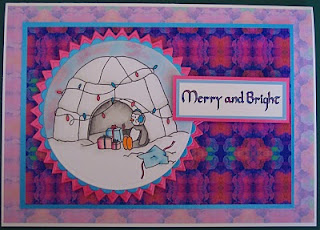 I printed the image on Ryman ink jet card and coloured it, mainly with Promarkers, but I also added some detail with Fineliners. As soon as I saw the image, it screamed 'Northern Lights' at me, but of course, with Penguins and Christmas as the theme, that should be 'Southern Lights', hence the bright colours I teamed with the image. I made the backing paper in Photoshop Elements and printed it out on Ryman coated ink jet matte photo paper. (I don't have shares in Ryman, honest, but I do like some of their paper and card.) I took the same paper and 'whitewashed' it digitally to get the paler paper, and the same pattern and used it to fill the text in Web Canvas.

I used two different nesties for matting - both the small scallops and pinking circles which I thought worked well together - definitely a slightly quirky look, but I liked it.

I'd like to enter the card into the following challenge:


Our Creative Corner which is looking for Christmas cards.

Now, when I got the image, I was itching to start on it, and forgot that this week's challenge was a sketch. So, my first card didn't follow anything but my own imagination. Still, you can't have too many Christmas cards, now can you? 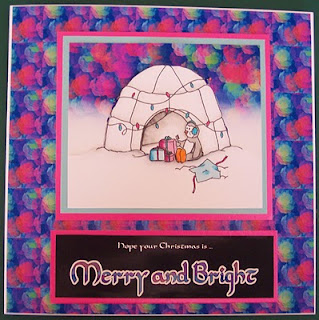 The background here is actually the same base as the card above. I digitally stamped the sky in the image here, and took a section of it and made a tiled pattern for the backing paper. For the challenge card, I then took a section and mirrored it so you don't get break lines when you tile. Other than that, the two patterns are the same.

So, Christmas in August, eh?

Hope you're inspired by the sketch (and the image) and will join us at OSAAT this week. And don't forget to check out the Stitchy Bear shop - we've got new stamp designers joining, so there's even more variety available now!
Posted by Josephine at 12:00

I love your cards, they are beautiful.
Hugs, Nataliya.

Oh wow Josephine these are wonderful that bp is really vibrant and different I love that image I am so glad that you have shown both cards or we would have missed something special.
Hugs
Lorraine x

Fabulous cards Jo, I love the brightness of those colours and how you have coloured the image. Great job.

Awww this stamp is adorable, love the penguins, really cute. Fab papers that you used xx

Great idea for your Christmas card and yes I agree it does shout Northern Lights! Love it.
Carol Ann xx

Josephine, this is just beautiful, I love the colors, they are brilliant ;)

Lovely card - like the image you used and the circular frame. Lovely bright colours too!