A Card for my Sister

My sister is moving house at the weekend, sharing with her new partner for the first time. I've never met him, so it's hard to know what he might like, and for various reasons, I didn't want to go for a traditional 'new home' card - because it's as much a wish for luck for the relationship as the house, if you see what I mean.

I looked through my collection of digis - which are much more versatile than my rubber stamps, and spotted one of the freebies from My Grafico, and off I went! 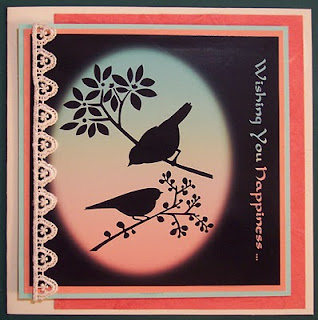 Isn't that a pretty silhouette? I framed the image first, then put a green/peach gradient behind it and added the wording. For that I used a very useful bit of software I bought a long time ago. At that time I was doing some web page design and I bought a package called Namo WebEditor. Along with that package came something called Web Canvas which is a vector graphics programme. Among the things it can do that my usual Photoshop Elements can't, is fill any shape with any gradient or pattern, including text. So, I filled the text with the same gradient, and I had my sentiment.

Due to the size of the printed image, the card can't have a lot of embellishment, so I just added some paper from my collection and a bit of lace.

I'm just worried that when my laptop falls over, my next computer won't be able to run this rather elderly bit of software which was designed to run on Windows 98 and XP. Because I won't know how to live without it!

I'd like to enter this card for this weeks challenge on Daring Cardmakers which asks for silhouettes.
Posted by Josephine at 22:06

This is gorgeous and the eye is drawn so beautifully to the birdies in the middle due to the delicate shading behind them.

I can see why you would regret the passing of this piece of software.

It's gorgeous! I love the birdies and the soft background really shows them up so well

This is beautiful!
Thanks for playing!

OMG Josephine this is breathtaking I so love the colours behind that beautiful image oh my your sister will absolutely adore it I know I do.
Hugs
Lorraine x